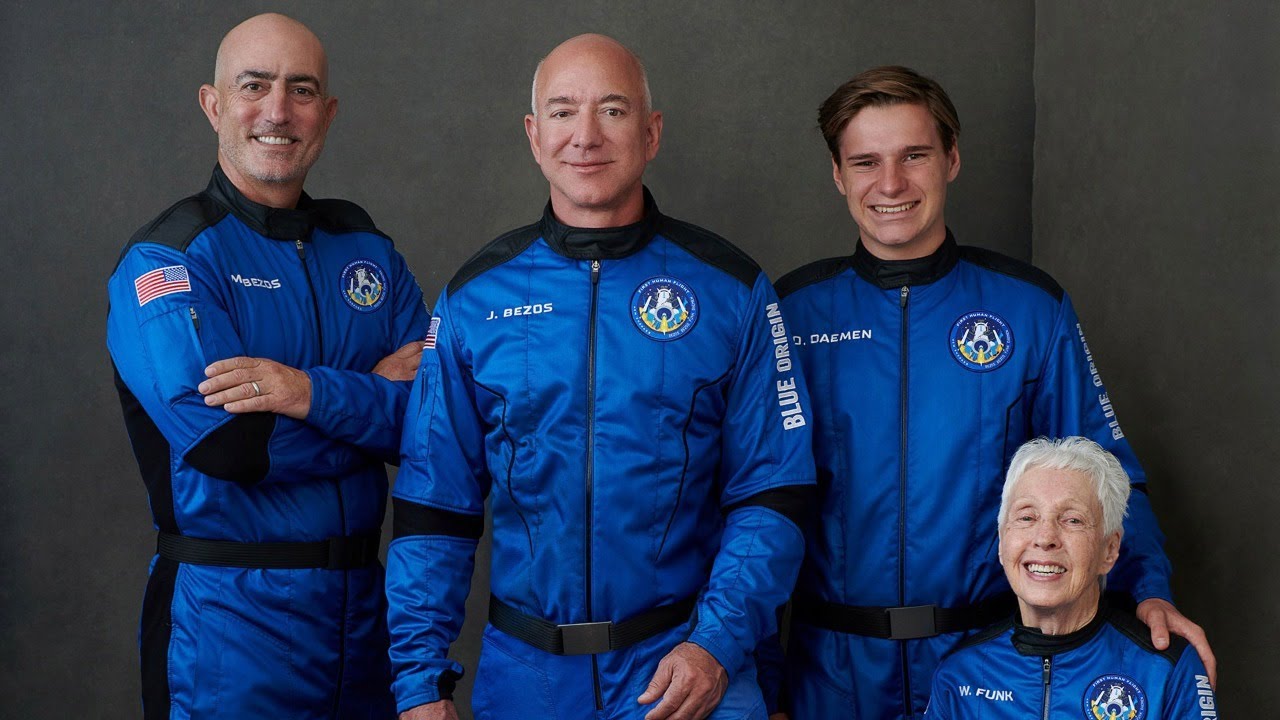 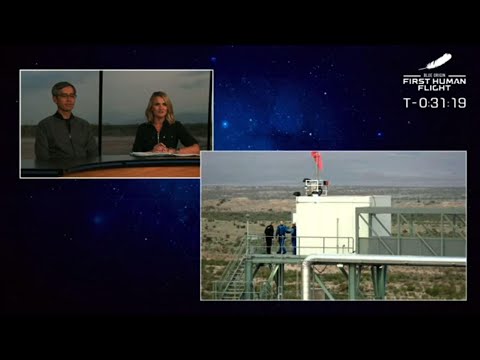 "Best day ever," Bezos said after the space capsule touched down, kicking up a cloud of dust on the desert floor.

The spacecraft ignited its BE-3 engines for a liftoff from Blue Origin's Launch Site One facility about 20 miles outside the rural town of Van Horn, flying about 66.5 miles above the planet's surface. There were generally clear skies with a few patchy clouds on a cool morning for the launch.

The 57-year-old American billionaire flew on a voyage lasting about 10 minutes and 20 seconds to the edge of space, nine days after Briton Richard Branson was aboard his competing space tourism company Virgin Galactic's successful inaugural suborbital flight from New Mexico.

New Shepard was designed to hurtle at speeds upwards of 2,200 miles per hour to an altitude beyond the so-called Kármán line — 62 miles — set by an international aeronautics body as defining the boundary between Earth's atmosphere and space.

After the capsule separates from the booster, the crew was due to have unbuckled for a few minutes of weightlessness.

"Astronaut Bezos in my seat — happy, happy, happy," Bezos said in response to a mission control status check after the crew members buckled back in aboard New Shepard's capsule following those few minutes of weightlessness. Then the capsule returned to Earth under parachutes, using a last-minute retro-thrust system that expelled a "pillow of air" for a soft landing in the Texas desert.

Bezos gave a thumbs-up sign from inside the capsule after landing on the desert floor before stepping out, wearing a cowboy hat and blue flight suit, and giving company employees high fives. Bezos and the other crew members exchanged hugs and popped champagne, spraying each other.

The mission was part of a fiercely competitive battle between Bezos' Blue Origin and fellow billionaire Richard Branson's Virgin Galactic to tap a potentially lucrative space tourism market the Swiss bank UBS estimates will be worth $3 billion annually in a decade.

Bezos and the other passengers climbed into an SUV vehicle for a short drive to the launch pad before walking up a tower and getting aboard the gleaming white spacecraft, with a blue feather design on its side. Each passenger rang a shiny bell before boarding the craft's capsule.

Branson got to space first, but Bezos was due to fly higher — 62 miles for Blue Origin compared to 53 miles for Virgin Galactic — in what experts call the world's first unpiloted space flight with an all-civilian crew. It represents Blue Origin's first crewed flight to space.

Bezos embraced Funk after the landing.

The flight coincides with the anniversary of Americans Neil Armstrong and Edwin "Buzz" Aldrin becoming the first humans to walk on the moon, on July 20, 1969. New Shepard is named for Alan Shepard, who in 1961 became the first American in space.

Funk was one of the so-called Mercury 13 group of women who trained to become NASA astronauts in the early 1960s but was passed over because of her gender. Daemen, Blue Origin's first paying customer, is set to study physics and innovation management in the Netherlands. His father, who heads investment management firm Somerset Capital Partners, was on site to watch his son fly to space.

The launch was witnessed by members of the Bezos family and Blue Origin employees, and a few spectators gathered along the highway before dawn. Spectators applauded during the flight.

New Shepard is a 60-foot-tall and fully autonomous rocket-and-capsule combo that cannot be piloted from inside the spacecraft. It is completely computer-flown and had none of Blue Origin's staff astronauts or trained personnel onboard.

Virgin Galactic used a space plane with a pair of pilots on board.

The launch represented another step in the race to establish a space tourism sector that Swiss investment bank UBS estimates will reach $3 billion annually in a decade. Another billionaire tech mogul, Elon Musk, plans to send an all-civilian crew on a several-day orbital mission on his Crew Dragon capsule in September.

On Twitter, Musk wished the Blue Origin crew "best of luck" hours before the launch.

Blue Origin aims for the first of two more passenger flights this year to happen in September or October.

Blue Origin appears to have a reservoir of future customers. More than 6,000 people from at least 143 countries entered an auction to become the first paying customer. The auction winner, who made a $28 million bid, dropped out of Tuesday's flight, opening the way for Daemen. Virgin Galactic has said 600 people have booked reservations, priced at about $250,000 per ticket.

Branson has said he aims ultimately to lower the price to about $40,000 per seat.

Bezos has a net worth of $206 billion according to the Bloomberg Billionaires Index https://www.bloomberg.com/billionaires. He stepped down this month as Amazon CEO but remains its executive chairman.