SALT LAKE CITY — As temperatures soared outside on a recent weekday afternoon, young figure skaters were practicing their jumps at the Utah Olympic Oval in Kearns. On an adjacent rink, a group of adult curlers furiously swept a path for a curling stone.

There was no ice on the 2002 Winter Games speedskating track and adjacent running lanes weren't as busy, but the new leaders of the group behind bringing another Olympics to Utah, the Salt Lake City-Utah Committee for the Games, focused instead on the athletes who were trying to perfect their skills.

It's something the committee's chairwoman, Catherine Raney Norman, understands well as a speedskater who competed in four Olympics, including in 2002. Steve Starks, vice chairman and Olympic adviser to Gov. Spencer Cox, gets it, too, as CEO of the Larry H. Miller Group of Companies and a former Utah Jazz president.

A figure skater before she switched to speedskating while growing up in Wisconsin, Raney Norman noted some of the training techniques in use, and Starks offered fist-bumps and words of encouragement to the young skaters as they left the ice.

When Salt Lake City and Utah first hosted the Olympics nearly two decades ago, Raney Norman, 41, had already competed as a teenager for Team USA at the 1998 Winter Games in Nagano, Japan. Starks, who's a year older, was student body president at Weber State University.

Both see those Winter Games as a major contributor to the state, something they hope to repeat again and again by hosting not just in either 2030 or 2034, but every 20 years or so after that, while continuing to use venues like the speedskating oval between Olympics for the community as well as for athlete training and competition.

"The pride that we feel in regards to having hosted the Games is still seen every single day, right? These venues are alive. They're active. They're busy. They've impacted our communities. And that spirit just continues to grow," Raney Norman said. "It's felt here every single day, and that's something I'm excited to amplify."

That legacy from 2002 helped Salt Lake City secure the support of the U.S. Olympic & Paralympic Committee in December 2018 over Denver as the nation's choice to bid for a future Winter Games. Whether that's for 2030 or 2034 may not be decided, however, until sometime after the Winter Games in Beijing that begin next February.

While waiting for a choice to be made by the national committee, Utah is already participating in the International Olympic Committee's new, less formal bidding process that allows for the selection of a host city whenever a suitable candidate emerges rather than the traditional timetable of seven years in advance.

That can mean multiple Olympics being awarded at the same time, as happened nearly four years ago when the 2024 Summer Games went to Paris and the 2028 Summer Games to Los Angeles. Or a pick can come quickly, as with Brisbane, Australia, now being recommended to host the 2032 Summer Games.

At least three other cities are also vying for a Winter Games: Sapporo, Japan; Vancouver, Canada; and Barcelona, Spain. All have also hosted an Olympics before, Sapporo in 1972; Vancouver in 2010; and Barcelona, which is bidding with communities in the nearby Pyrenees, the 1992 Summer Games.

Utah's bidders are putting together plans to host either 2030 or 2034, but they're not stopping there.

"We want to be prepared for both options and to be able to do it successfully," Starks said. "We also want to take the long-term view, that whether it's 2030 or 2034, what we would really love to see is 2050, 2070, that we're positioned as a place that can regularly host the Games. That's exciting, too."

No one associated with the Utah bid is stating a preference for when they'd like to see the Games return, but Raney Norman likes to joke that her son will still be too young to compete in 2030. In March, she introduced 4-year-old River Huck Norman to skating at the oval.

"My little guy kept yelling, 'Mama, let's go faster.' Of course, he can't stand. He can't stand so I'm holding him and my arms hadn't had to work out this hard forever. But he made his first trip" around the ice, Raney Norman said, something she didn't do until she was several years older than him.

The shift to a younger generation of leaders — Raney Norman is taking over from Cindy Crane, a retired Rocky Mountain Power president and CEO who will serve on a new executive committee along with the former vice chairmen — is intended to showcase the goal of becoming a perpetual host.

For now, the Olympic world's attention is on Tokyo, where what was supposed to be the 2020 Summer Games is set to start July 23 after being postponed a year due to COVID-19. With the virus still sweeping through Japan, many restrictions are in place for the upcoming event, including no longer allowing spectators in a decision announced Thursday.

That means Utah's bid team won't be able to mingle with Olympic decision-makers in Japan or see firsthand how Games organizers face the problems posed by the pandemic that in some ways parallel what Salt Lake dealt with as host of the first major international event following the Sept. 11, 2001, terrorist attacks against the United States.

Tokyo is "going to be different obviously than any other Games," Raney Norman said. "Of course, we're hoping everything happens smoothly and safely and all of that, but I think Tokyo is going to be an example of kind of one of those unique, iconic moments, like what we had here in '02."

The power of the world coming together after the deadly attacks is what stands out about the Salt Lake City Games, both leaders said, not the international scandal over the cash, gifts and scholarships provided to IOC members and their families during the bid for 2002, which helped lead to the new process for selecting host cities.

"I don't hear a lot about the scandal at all," Starks said. He said he believes "people remember the Olympics in Utah incredibly favorably because it was arguably one of the most successful Games ever held. I think that's what people think of when they think of 2002."

Tokyo represents another welcome opportunity to focus on athletic competition in troubled times, Starks said, just as Salt Lake City did after 9/11 and the National Basketball Association did by creating an isolation zone for players to finish out the season last year after suspending play at the start of the coronavirus outbreak.

"I think people will enjoy watching the world come together again and having sport unite us. Sports has played a really big role throughout the pandemic," he said, adding the Tokyo Olympics "will be a reminder that we're all excited to get back together in person." 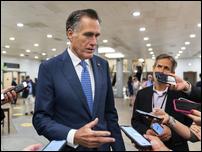 Folded into legislation the Senate passed in June aimed at competing economically with China is a mandate for a diplomatic boycott of the 2022 Beijing Olympics in light of ongoing human rights abuses, including the Uyghur genocide.

The next Olympics after Tokyo is now just months away, with the 2022 Beijing Winter Games on schedule to begin next February. But there's already controversy over China's human rights record, leading to calls for a diplomatic and economic boycott from Utah Sen. Mitt Romney, the former head of the 2002 Winter Games, and others.

In Beijing, Raney Norman said, the hope is that Team USA members who train in Utah — especially those among the 10 Winter Games athletes added to the committee — can take the lead in lobbying to bring the Olympics back to the state.

"Our athletes are our best advocates and ambassadors and they will be there," she said, calling the decision by the U.S. and several other nations not to send athletes to the 1980 Summer Games in Moscow to protest the Soviet invasion of Afghanistan "gut-wrenching."

Next February also marks the 20-year anniversary of the 2002 Winter Games, a milestone that's expected to kick off a more public campaign to ensure Utahns stay enthusiastic about another bid. Back in November 2017, a poll commissioned by bid backers found 89% of Utahns supported trying again for the Winter Games.

How Utahns view bidding again amid the political turmoil of Beijing's second Olympics in 14 years remains to be seen, but Starks is optimistic.

"The Olympics are one of the most unique and powerful ways that can showcase that we live in a world with differing views and sometimes, very sharp differences of philosophy and opinion and yet, it celebrates shared humanity," he said, creating a potential catalyst for positive change.

"That's a healthy thing, I don't think we ever want to lose that," Starks said. "Utah is really part of that world community. While we may not be able to influence things that are taking place in other countries, we want to make sure that everyone knows the world is welcome here."