SALT LAKE CITY — Dennis Lindsey's decision to step down from his longtime position with the Utah Jazz should come as no surprise.

While not specific to Lindsey's role as executive vice president, management reorganizations were basically inevitable dating back several months to the Miller family's decision to sell the team. Almost always, new ownership translates into new faces.

Even before Lindsey's resignation went public Sunday, there was rampant speculation change was coming at some level. Clevis Murray, a writer for The Athletic based in Massachusetts, reported on Twitter on June 24 of a disconnect between Lindsey and coach Quin Snyder leading to a belief that Lindsey could depart.

The discord between Lindsey and Snyder that developed over time was not exactly a secret in NBA circles. To each individual's credit, any philosophical differences didn't get in the way of the team producing the league's best record over the course of the recently completed 72-game regular season.

Rather than leave entirely, Lindsey said he will transition into an advisory role. Bottom line no matter the spin, after nine years in a leadership capacity, he is out.

In the NBA world, the news was hardly a surprise. Not that it should have, either.

New majority owner Ryan Smith deserves the right to shape the franchise as he sees fit. Lindsey said as much the day after the Jazz playoff run ended in disappointing fashion in the second round.

"As (Smith) gets his footing, it's only natural that a few of his preferences, inclinations will move us operating in certain ways," Lindsey said. 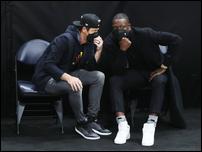 Bringing Dwyane Wade on was headline grabbing. But the announcement that Dennis Lindsey was moving to an advisory role was Ryan Smith's first big move as the majority owner of the Jazz.

Barely one week later, Justin Zanik was tabbed to lead the team's management. Capable in his own right, Zanik was promoted to general manager two years and has been intricately involved in shaping the team the last several years.

To some degree, Smith wasted little time in sending shock waves throughout the NBA. Less than four months after he officially assumed control of the team, NBA legend Dwyane Wade came aboard as a minority owner.

Instead of acting mostly as a silent investor, Wade literally moved to the front line. In addition to sitting next to Smith courtside in the playoffs, the longtime Miami Heat star repeatedly interacted with Snyder and the players.

"He's been around a lot," Joe Ingles said earlier this month.

Wade's involvement is part of Smith's master plan to reshape the organization according to his desires. Possessing a youthful energy, the 44-year-old owner has vowed his initial moves with the team are only the beginning.

At least for now, Smith is willing to side with Snyder in a move that is a huge vote of confidence for the seventh-year coach. Along with it, the onus now rests on Zanik and Snyder to improve upon the tremendous foundation that Lindsey built.

Lindsey joined the Jazz in 2012, leading the transition from coach Tyrone Corbin to Snyder. After missing the playoffs for four consecutive years, the Jazz made the playoffs in 2017 and have not missed since.

But the team, obviously, was far from without weakness. Management faces a tough decision whether to re-sign free agent Conley at a salary cap-friendly price and has to improve upon a bench that was woefully inadequate during the playoff loss to the Los Angeles Clippers in the second round.

Trying to evaluate the entirety of the Jazz season has become a difficult endeavor, with strong arguments pointing in opposite directions.
×