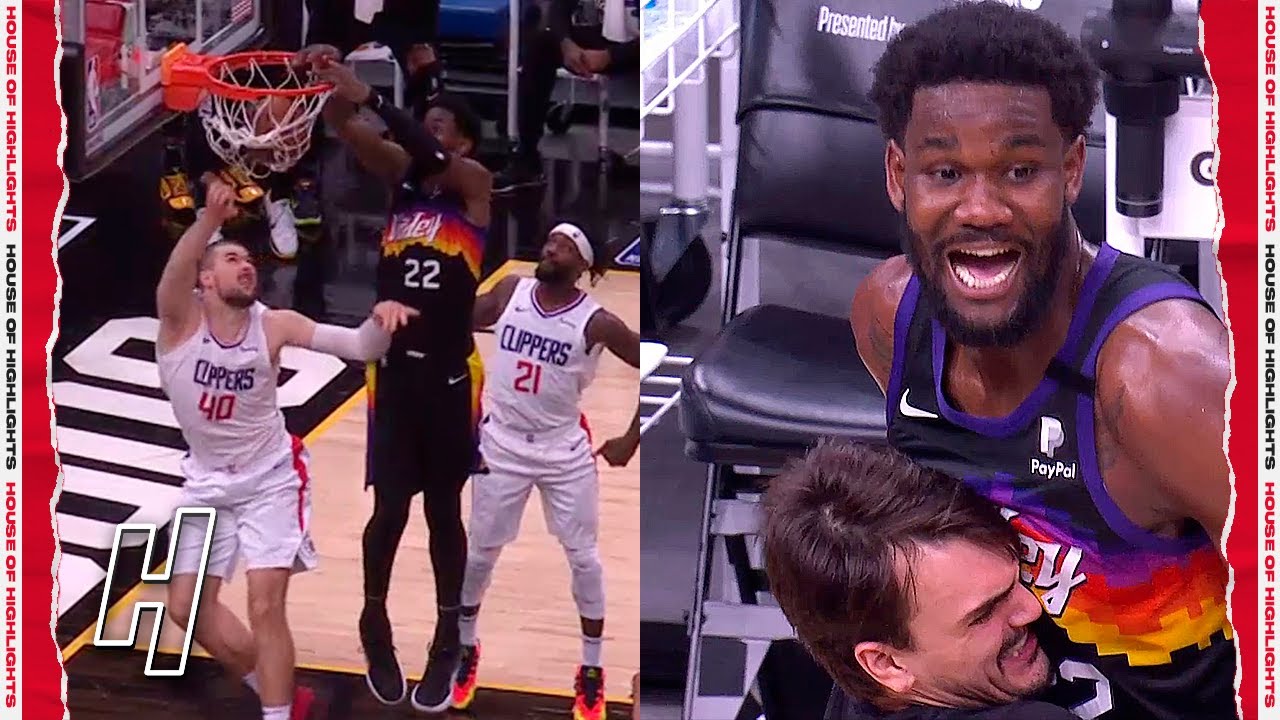 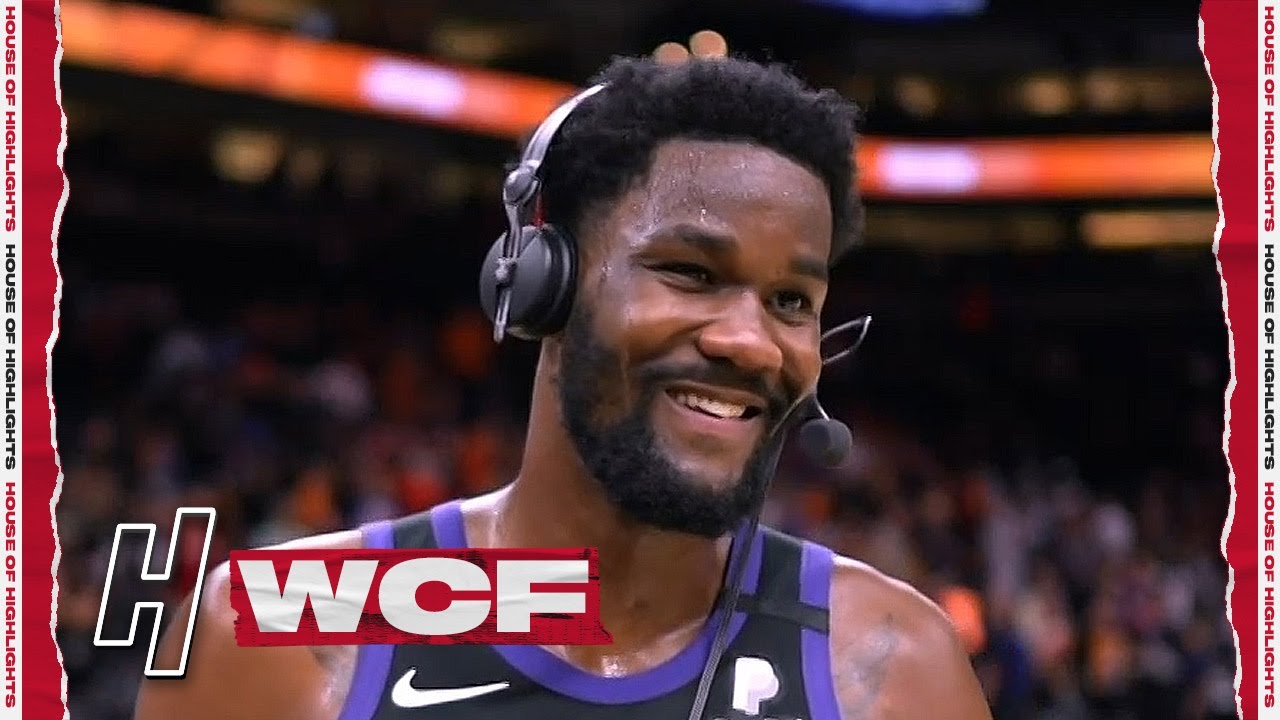 PHOENIX (AP) — Devin Booker sat in a chair with a crooked and swollen nose, complete with tape over three fresh stitches.

He also had a big smile on his face, remembering Jae Crowder's pass, Deandre Ayton's tip-in dunk and a play that will live in Phoenix Suns lore for a long, long time.

Ayton jammed an alley-oop pass from Crowder with 0.7 seconds left, lifting the Suns to a 104-103 win over the Los Angeles Clippers on Tuesday night in Game 2 of the Western Conference finals.

It was a game that looked as if it was all but over, but Booker's Suns were not going to be denied.

The Suns were down one with 0.9 seconds left when Crowder lofted a high pass on an out-of-bounds play on the baseline. A soaring Ayton came down the lane and stuffed it through the net over L.A.'s Ivica Zubac as the crowd roared in disbelief. Booker — playing with a stitched up nose following a collision with Clippers guard Patrick Beverley — had a key screen on Zubac on the final play, which helped free Ayton.

The referees spent about a minute reviewing the play before ruling the basket was good. The Clippers couldn't get a shot off in the final 0.7 seconds, and Booker spent some time jawing with Clippers players Rajon Rondo and Demarcus Cousins in the aftermath.

"Those are my Kentucky guys," Booker said with a grin. "I told them 'Go Big Blue.'"

The Suns now have a 2-0 lead in the series heading to Los Angeles for Game 3 on Thursday night. The Clippers will be fighting from a 2-0 deficit for the third time in these playoffs after rallying to beat the Mavericks and Jazz.

The Crowder-to-Ayton connection negated a Clippers rally that was led by Paul George, who had 26 points.

George made a layup with 31 seconds left to give the Clippers a 101-100 lead for their first advantage since early in the third quarter. He added a 22-footer on their next offensive possession for a 103-102 lead.

But there was a lot more action left.

George — and 85% career free throw shooter — missed two free throws with 8.2 seconds remaining and the Suns had a chance to win, but it looked as if it wouldn't happen when Mikal Bridges missed a corner 3-pointer and the ball was deflected out of bounds.

Instead, it set up Crowder's heave to Ayton, who was dominant in the paint all game long.

Even with his big night, George's missed free throws loomed large. He's shot nearly 85% at the line in his career.

"He is alright," Clippers coach Tyronn Lue said. "It is part of the game. Guys know without him we wouldn't be in the game anyway."

The Suns have won a franchise-record nine straight in the playoffs.

The Suns were led by Cameron Payne, who was brilliant while subbing for All-Star Chris Paul. He finished with a career-high 29 points. Ayton had 24 points and 14 rebounds, while Booker added 20 points.

"We just had no answer for Cameron Payne," Lue said. "He got downhill all night. His speed and his quickness really hurt us all night."

Payne repeatedly carved through the Clippers defense, making tough buckets at the rim with pretty left-handed finishes. He made what looked like a crucial layup with about 90 seconds left, finishing high off the glass to give the Suns a 100-95 lead.

But the gritty Clippers responded and nearly pulled this one out.

Ayton continued his eye-opening performance in these playoffs. The No. 1 overall pick in 2018 out of Arizona often has been overshadowed by later picks in the same draft like Atlanta's Trae Young and Dallas' Luka Doncic. But he has carved out quite a niche in Phoenix and now has a signature play that will live on in franchise history.

The Suns were playing without Paul for the second straight game. The 11-time All-Star has been in the league's COVID-19 health and safety protocol for the past week and the team isn't sure when he'll return.

Clippers star Kawhi Leonard missed his fourth straight game with a right knee sprain, and he stayed in Los Angeles to get treatment on the injury.

The action was physical from the opening minutes. Referee Scott Foster gave technicals to Crowder and Clippers forward Marcus Morris Sr. after some jawing following a scrum for a loose ball.

Booker took a shot to the nose late in the third after he bumped heads with Beverley, who was playing tight defense. The Suns guard fell to the floor and was down for a minute before walking back to the locker room with the medical staff with a towel over his nose.

Beverley was also left bloody on the forehead from the exchange and had to leave the game and change jerseys.

A foul was called on Beverley. The referees ruled it was not flagrant. Booker jogged back out onto the court before the fourth quarter to a big roar from the crowd.

Clippers: Lue shook up the starting lineup, using Beverley and Zubac in place of Nicolas Batum and Terance Mann. ... Leonard and forward Serge Ibaka (back surgery) didn't play. ... Morris was dealing with a sore right knee that limited him in Game 1, but he started on Tuesday.