SALT LAKE CITY — While some state lawmakers expressed concerns Wednesday about a new State School Board rule on diversity, equity and inclusion, others praised the board for "wading through the hysteria" surrounding the debate over teaching critical race theory concepts.

Rep. Andrew Stoddard, D-Sandy, said that as he listened to the board's presentation, he thought about "how hard it must have been to wade through the hysteria and craft something that is so universally accepted and accepted unanimously on the board."

Two members of the State School Board on Wednesday morning presented the newly approved board rule to the Utah Legislature's Education Interim Committee, its adoption prompted by lawmakers' recent passage of resolutions on critical race theory — one by the Utah Senate and another in the Utah House of Representatives.

Republican legislative leaders called themselves into an extraordinary session to consider the resolutions, which encouraged the school board to ban the teaching of "harmful" concepts. They joined other GOP-led state legislatures across the country taking various actions against the teaching of critical race theory.

The board's rule on diversity, equity and inclusion delineates what can and cannot be taught in public schools.

The rule prohibits instruction that "a student or educator bears responsibility for the past actions of individuals from the same sex, race, religion, sexual orientation, gender identity or any other protected class as the student or educator." 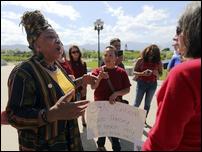 State schools now have rule on teaching about race, equity — here's what it says

After months of discussion in Utah and across the nation about the controversial critical race theory, Utah teachers now have a rule to clarify what concepts of diversity, equity and inclusion cannot be taught in public schools.

However, the rule does not prohibit or ban discussions of events, ideas, attitudes, beliefs or concepts "from the general sharing and participation in the marketplace of ideas fostered in a learning environment."

The 1619 Project curriculum was developed by the Pulitzer Center based on a collection of essays and literary works observing the 400th anniversary of the beginning of American slavery published in The New York Times Magazine. The curriculum asks students to examine the history and the legacy of slavery in the United States.

State School Board member Scott Hansen said the board rule also states that educators may not promote one ideology over another but they may moderate age-appropriate classroom discussions.

"We didn't want to be in the business of banning ideas. We thought that that was a bad precedent to set and wanted to make sure that ideas could be discussed appropriately and within guidelines," said Hansen.

The State School Board establishes core standards but curriculum decisions are left to local districts, he said.

Hansen said he expects that the 1619 Project will be discussed when the state board launches a process to revise social studies standards.

Rep. Karen Kwan, D-Murray, thanked the school board for its work on the rule.

"You thought about it critically, thoughtfully and purposefully. I was especially happy to hear that the intent is to reinforce the teachers moderating discussions. I did have a worry that our teachers might feel constrained about having these sometimes difficult conversations but it sounds that the intent was to encourage the conversation within age-appropriate ways and to allow our students to have their individual thoughts and opinions and develop that critical thinking," said Kwan.

Rep. Steve Waldrip, R-Eden, also expressed gratitude to the State School Board, noting "you guys have been walking a razor's edge in dealing with something that's very emotionally charged, a media-driven issue, that you know that that goes to the heart of some of the things that we worry most about in our society."

Earlier this month, the State School Board, over four hours of debate, considered 29 amendments to the rule, which was "nothing short of an absolute miracle," Vice Chairwoman Cindy Davis said at the time.

Under the board's rule-making process, the new rule will be published in the July 1 Utah State Bulletin and is subject to a 30-day comment period. Afterward, if 10 individuals or a group that represents at least 10 individuals requests a public hearing on the rule, the board must conduct a hearing. Otherwise, the rule could go into effect as soon as Aug. 7.

State School Board Chairman Mark Huntsman told lawmakers that the board's work on educational equity was not limited to the recently approved board rule.

It also addressed education equity in the board's strategic plan approved in 2018, the Portrait of Graduate adopted in 2019, which identifies the ideal characteristics of a Utah graduate after going through the K-12 system, and a resolution denouncing racism and embracing equity adopted by the board in January.

"All of this is very relevant and part of our journey within the Utah State Board of Education bringing these betterments forth in Utah public education," Huntsman said.