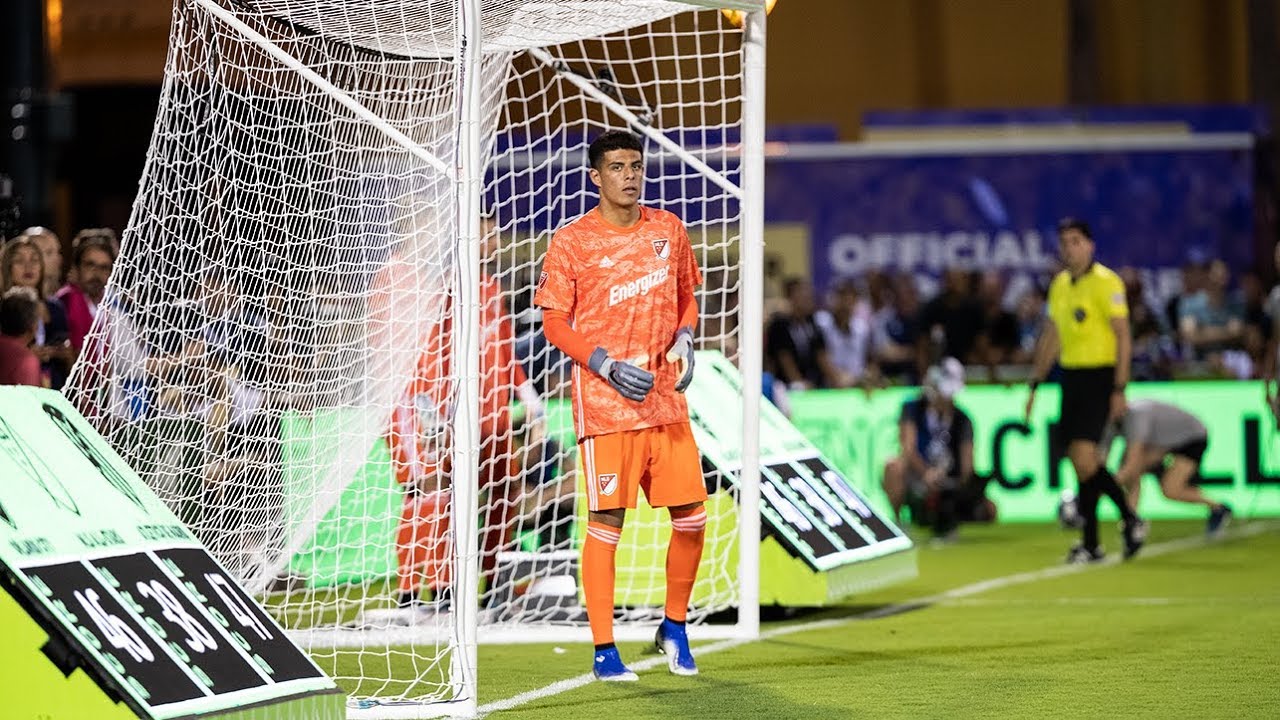 SANDY — David Ochoa is hardly a newcomer to the international game.

But the 20-year-old Real Salt Lake goalkeeper took a major step in the development of his career Thursday when he was named to the United States' 27-man roster for training camp ahead of a European-based international friendly at the end of the month.

Ochoa has been called up to the U.S. men's national team roster for training camp and subsequent May 30 international friendly against No. 13 Switzerland. The camp, which will be held in St. Gallen as the United States prepares for its final match ahead of CONCACAF Nations League semifinal play, will feature three goalkeepers — and only one from Major League Soccer.

Ochoa has represented the United States at the U-18, U-20 and U-23 levels, and he's been involved with the World Cup qualifying and Olympic qualifying since he was as young as 16 years old. He even got called into an all-domestic camp in Florida in December but was forced to withdraw with a quad injury after just three days. And the American camp still sees a bright future for the young keeper, despite what opposing coaches in MLS might say.

"It's all just a process, and ultimately you want to get to the senior team; that's the best of the best," Ochoa said. "Looking back, it's been a long ladder. It feels good to get this call up and to see all the guys on the roster. It's humbling to see all the hard work I've put in, and to be where I want to be."

Even after struggling in a loss to Honduras that sealed the United States' most recent Olympic qualifying fate, U.S. coach Gregg Berhalter is ready to give Ochoa another chance. He's barely 20, after all, and the Americans are in strong need to get younger between the posts, behind starters like 26-year-old Zack Steffen and 36-year-old backup Brad Guzan.

.@davidochoagk is a rising star on the international stage 🌟#RSL | @USMNTpic.twitter.com/3UmCNV8w9M

"We felt that David had a strong Olympic qualifying," Berhalter said. "Obviously the last game didn't go as planned, but we felt he performed well. We realize that our goalkeeper program lacks youth, and it will be good to get him integrated as soon as possible."

Ochoa will be joined by Ethan Horvath, the most tenured 'keeper in the camp with four international caps who plays for Club Brugge in Belgium; as well as Chituru Odunze, the Leicester City keeper who is also making his U.S. senior debut. He's also one of three making their first formal appearance in a senior camp, joining Justin Che and Matthew Hoppe.

"In every camp we like to integrate young players into it," Berhalter added. "We feel like the program will benefit from giving these young players experiences early on. These are three players that fit the mold."

U.S. Soccer hasn't told Real Salt Lake how much time Ochoa might miss with travel, camp and the friendly May 30. But RSL coach Freddy Juarez was quick to add his congratulations for Ochoa — not only because of what he's done as the No. 1 goalkeeper for Salt Lake, but also his development through the academy and Real Monarchs.

Backup goalkeepers Zac MacMath and Andrew Putna deserve plenty of credit for the moment, as well, he said.

"We're always excited for any of our players who go on international call, and even a little extra excited when it's someone who comes out of the academy, and even the Monarchs to the first team," Juarez said. "It's always a special thank you to every coach who helped support him and groom him. It always looks good on the club, and it helps his professional development, too. We love it."

"The environment that those guys created to help him develop has been amazing," the head coach added. "Those guys deserve a lot of credit for helping Ochoa earn this callup, as well."

A young roster in camp, 11 of the 27 players will have four or fewer appearances with the senior team, including four who like Ochoa have yet to receive their first senior cap.

Ochoa has represented the United States, including starting in goal during the country's most recent ill-fated campaign to qualify for the Tokyo Olympics. In four matches this season as Real Salt Lake's full-time starter, the 20-year-old RSL Academy product has a 2-1-1 record with one shutout and a 1.009 goals-against average. He previously starred for the second-division Real Monarchs, including winning the USL Championship title in 2019 with a 1.15 goals-against average in five playoff wins and a 9-9-4 record in 22 regular-season matches, with four shutouts.

The next level has required an adjustment, obviously, beginning with his first career start with RSL in the season finale a year ago and through the first four games of the 2021 MLS season.

But after attending the RSL Academy and signing a professional contract in 2018 with the Monarchs, the dual Mexican-American international from Oxnard, California is making the adjustment necessary — both with the RSL first team, and his future goals of playing in Europe, where he says a big club like Real Madrid would be the ultimate dream.

"It's obviously a little quicker than the USL and obviously the academy. But honestly, I feel comfortable," Ochoa said in Spanish. "My debut last season was probably the real wake-up call. But so far this season, I've felt comfortable. I feel confident in my abilities, and hopefully I keep performing.

The United States are facing a top-20 opponent for the sixth time in Berhalter's tenure since being named the manager in 2019. The Swiss feature big names like Arsenal midfielder Granit Xhaka and Liverpool's Xherdan Shaqiri, and will be preparing for the European Championship, where their own Group A also includes Italy, Turkey and Wales.

The United States' schedule will travel between Europe and North America throughout the summer, including for the June 9 match against Costa Rica at Rio Tinto Stadium.

USMNT roster for May training camp ahead of friendly with No. 13 Switzerland