SALT LAKE CITY — Gov. Spencer Cox on Tuesday unveiled his pick to be the state's leader over Utah's umbrella of homeless services — an announcement that has been eagerly awaited by advocates since the passage of a new bill to restructure Utah's homeless services system.

"During his legislative career, Wayne did not shy away from helping to solve some of the most complex and difficult issues facing the state, and he's proving that resolve again in accepting this key public service assignment," Cox said in a prepared statement. "His leadership and ability to bring parties together will be crucial as we develop a coordinated approach to improving life for some of the most vulnerable among us."

Niederhauser, a certified public accountant and real estate broker who co-owns and operates real estate company CW Real Estate Services, doesn't have on-the-ground experience specifically in homelessness, though he serves on the Pioneer Park Coalition's board and was a legislative leader when his House counterpart, former House Speaker Greg Hughes, spearheaded the controversial Operation Rio Grande in 2017.

The multi-year effort to break down overwhelming homeless camps and root out drug dealing in the neighborhood surrounding the Road Home's now-shuttered downtown shelter received backlash from groups including the American Civil Liberties Union, which called called it a "hammer" that treated people experiencing homelessness and drug addiction like "nails." While it helped bring the area back under control, clearing the way for a transition to the new system to serve the homeless, it also dispersed camping throughout Salt Lake City and beyond.

Some weren't happy with Cox's decision.

"A real estate developer, and someone who helped create the punitive, law enforcement drive 'operation rio grande' to displace the homeless, is a TERRIBLE choice to lead the effort to address homelessness in Utah," tweeted Deeda Seed, a former Salt Lake City councilwoman who is now a campaigner for the Center for Biological Diversity.

Niederhauser acknowledged in an interview with the Deseret News Tuesday that some "people might have a raised eyebrow" by his name being picked. "I get that." But he said he's going to listen and learn from everyone involved to find solutions.

"I want to know what are the things we can do to help with these real problems that these real people face," he said.

Cox: 'We need the Legislature to stay involved'

In an interview with the Deseret News on Tuesday, the governor said he picked Niederhauser because he has leadership experience on various levels of government.

"It's impossible to find the perfect person for this position because again there are all of these different interested groups. Of course, we have most importantly those that are experiencing homelessness, then we have service providers. We have the Legislature. We have county government, local government, city government, and then we have the philanthropic class who donates money," Cox said.

And all of those groups are stakeholders in addressing homelessness in Utah, Cox said, so he needed someone that had the relationships and experience to swiftly jump in and take the lead.

"The reason that I selected Wayne is that he has experience with all of those groups and has the ability to navigate those," the governor said. "And he understands what he's walking into. He understands how difficult this really is."

Cox also said he needed someone with the ability to keep the Legislature committed, even though some lawmakers — citing more than $63 million spent to construct three new homeless resource centers opened in 2019, over $67 million for Operation Rio Grande in 2017 and 2018, and now another $50 million and more for affordable housing and homelessness this year — think the state should be done.

"We need the Legislature to stay involved," Cox said, "and we're at a dangerous point where there's kind of a feeling like, 'You know what, we've done enough, we're done, we're out.' And we don't want to lose that." 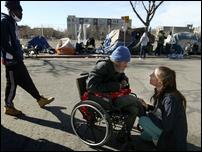 Utah's 2021 legislative session marked milestones in investments in affordable housing and sweeping changes to the homeless governance system, all meant to enact measurable improvements in two of the Beehive State's biggest issues.

"We don't have time to have somebody figure that out, and that's why it was so important and to get somebody of (Niederhauser's) caliber and his reputation was a huge win for the state."

"Having served as president of the Utah Senate as well as a key member of the Kem C. Gardner Institute study of homelessness, we believe Mr. Niederhauser is the leader Utah needs at this critical moment," Kelly said.

Niederhauser said he's eager to get to work.

"It wasn't that I needed a job — I have a business, I'm happy with that, but I wouldn't take any position in state government at this point except for this," Niederhauser said. "It's the human aspect. We're talking about real people in real situations that need some real help, and that's compelling to me."

Niederhauser said he's "humbled" by Cox's selection, adding that he knows he's "undertaking a huge issue in this state."

"We've had successes, and we've had failures. And we need to learn from our failures and capitalize on our successes going forward," he said.

We need the Legislature to stay involved and we're at a dangerous point where there's kind of a feeling like, 'You know what, we've done enough, we're done, we're out.' And we don't want to lose that.

Niederhauser said the situation downtown and on street camping is showing there continues to be those "failures" in Utah's homeless system.

"It's an uncomfortable place to be in the city at this point," he said. "I hear that from a lot of people."

Niederhauser said his first order of businesses is meet with all those involved, especially those "right on the ground" grappling with homelessness including service providers and those experiencing homelessness.

Passed this winter, HB347 creates a central leader on homelessness and makes other major changes after a Kem C. Gardner Policy Institute study late last year identified several issues with the state's homeless services system, including "confusing leadership" and incomplete data. The bill creates a governor-appointed state homeless coordinator position, who will lead a new Office of Homeless Services within the Department of Workforce Services and advise the governor about homelessness issues.

To assist Niederhauser, Cox also has assembled a sub-cabinet group on homeless issues, according to Tuesday's news release.

"This Cabinet support team will advise the coordinator, organize the state's response between various agencies and advance the governor's goals around supporting the implementation of directives set by the Utah Homeless Council," the release said.

Niederhauser served in the state Senate for over 12 years, including six years as its president. He led the state during the Great Recession and sponsored tax reform in 2007.

Currently, Niederhauser sits on several nonprofit boards including Utah State University's board of trustees, the Olympic Legacy Foundation, Columbus Community Center, the Utah Sports Commission, and the Salt Lake City-Utah Committee for the Games (Olympics). He also serves as co-chairman of the Utah Debate Commission.