Despite push to do so, few Utah students try to enter schools without masks

SALT LAKE CITY — After weekend rallies by the grassroots organization See My Smile that encouraged parents who believe their children should not have to wear masks to attend their K-12 schools to go to school without them, school districts along the Wasatch Front reported few incidents of maskless students on Monday.

Among parents whose children attempted to enter schools face coverings, most complied with administrators' requests to put on masks and join their classes or they took their children home, school officials said.

Although the statewide mask mandate ended Saturday, a state health order that requires masks to be worn in K-12 schools does not end until June 15.

Breann Johnson of Kaysville said she brought two of her children to their neighborhood school Monday without masks and she presented a parent letter to the principal. See My Smile's website provided examples of letters parents could present to school administrators.

The principal, whom Johnson described as "very, very wonderful," politely declined to allow the kindergartener and third grader into the school without a medical exemption signed by a licensed health care provider. Johnson said she will seek the medical exemption for her children.

Johnson said there has been a lot of fear-mongering regarding the wearing of masks. Wearing masks has affected children "psychologically, emotionally. It's deeply affecting our children. It is asinine, so bad, what we're doing to our kids," she said.

Some parents say there are only a few more weeks left in the school year, Johnson said.

Canyons School District spokesman Jeff Haney said there had been "very few instances when a student hasn't been wearing a mask. Students complied when asked to put their mask on."

Monday was like any other day since the beginning of the school year, he said.

"We're holding in-person classes while following all of the health and safety protocols, including mask-wearing, which is required by the health order," Haney said.

An excerpt from a letter to parents in the Alpine School District explains that under HB294, that the statewide mask mandate ended Saturday, but "it also stipulates that the K-12 school mask requirement does not end until June 15. Therefore, all schools throughout Utah are required to continue the expectation that masks be worn by order of the governor's office and the Utah Department of Health." 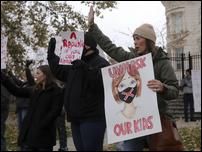 From planned weekend rallies in school districts across the state to speaking out at local school board meetings, some parents are pushing back against Utah's ongoing public health order that requires K-12 students to wear masks at school until June 15.

It also notes that the local school board, superintendent, principals or classroom teachers hold no authority to change the mask order. Concerns regarding mask issues should be addressed to state officials.

Rep. Paul Ray, R-Clearfield, sponsor of HB294, said he has heard from a number of frustrated parents but he has explained to them "that there was nothing the schools could do. They're under a requirement from the governor's office so there wasn't a whole lot to do."

Ray said it's unlikely the Utah Legislature would conduct a special session to deal with concerns over the mask mandate as it applies to schools.