SALT LAKE CITY — The CEOs of Facebook, Google and Twitter were back in front of Congress on Thursday but given little time to respond to a barrage of questions and concerns about their respective operations at a hearing that stretched for over five hours and included members of three U.S. House committees.

Facebook CEO Mark Zuckerberg, Google CEO Sundar Pichai and Twitter CEO Jack Dorsey were called by the House Energy and Commerce Committee to testify at a proceeding intended to explore how the platforms manage, or fail to manage, the posting and distribution of misinformation and extremist content. Instead, an extensive list of issues emerged with dozens of lawmakers from both parties lambasting the three executives for perceived collective and individual failures.

While the 2020 presidential election, the decisions by Facebook and Twitter to suspend the accounts of former President Donald Trump, inaccurate information surrounding COVID-19 and how social media platforms were leveraged to organize and mobilize activities that led to the Jan. 6 insurrectionist attack on the Capitol figured largely in the discussion, many lawmakers used their allotted five minutes of questioning to explore other issues.

Rep. Steve Scalise, R-Louisiana, raised the long-running conservative talking point that Twitter, Facebook and Google are biased against conservative viewpoints and censor material based on political or religious viewpoints. Experts say there's no widespread evidence that this is true. Scalise highlighted Twitter's blocking of a New York Post article on Hunter Biden, which CEO Jack Dorsey said was a mistake that the company corrected within 24 hours. Dorsey added that the content of the article wasn't the issue, but an imperfect application of the platform's "hacked materials" policy.

"We make mistakes and our goal (is) to correct them as quickly as possible and in that case we did," Dorsey said.

Scalise asked if anyone in Twitter's "censoring department" was held accountable.

"Well, we don't have a censoring department," Dorsey replied.

Utah Republican Sen. Mike Lee has expressed similar concerns about his feelings that social media platforms have shown a penchant for suppressing conservative voices and viewpoints in their content moderation and take-down policies.

In an announcement made last month, Lee said he's ready to lead the charge against U.S. Big Tech companies and what he sees as a widespread effort among those interests to suppress conservative voices and ideas and wield market power to suppress competition. 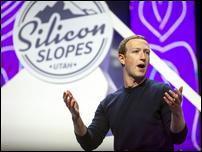 Facebook calls antitrust actions 'empty' and a government attempt at a 'do over' on Instagram, WhatsApp acquisitions

Social media behemoth Facebook announced Wednesday it has filed motions to dismiss two antitrust cases targeting the company, including one led by a group of state plaintiffs that includes Utah.

"We have much to address," Lee said in a release. "The actions of Big Tech continue to divide the nation, undermine fundamental liberties and distort the market.

"The Silicon Valley fairy tale of innovation and technological progress sold to Americans has turned into a corporatist nightmare of censorship and hypocrisy."

Rep. John Curtis, R-Utah, a member of the U.S. House Energy and Commerce Committee which convened the hearing, used his opportunity Thursday to explore whether the executives thought tightening up regulations on content moderation would create an unfair advantage for large, established companies with deep pockets and large staffs over the new companies that are coming out of emerging innovation zones like Utah's Silicon Slopes.

Zuckerberg, who has voiced support for updating federal regulations to better reflect the current reality of the online world, said he also believes those new rules should have a carveout for startups who, he said, should have a regulatory burden that's "as low as possible."

Curtis also shared an anecdote reflecting that a federal response to the power wielded by big U.S. tech companies was building broad support from both parties.

"My first comment is to point out that in her 2019 presidential campaign, Sen. Elizabeth Warren, Democrat, called for the breaking up of your companies," Curtis said. "Several weeks ago in his speech at (the Conservative Political Action Caucus conference) Sen. Josh Hawley, Republican, also said big tech companies should be broken up.

"I don't think I need to point out the irony of Josh Hawley validating Elizabeth Warren at CPAC."

"The time for self-regulation is over," Pallone said. "It's time we legislate to hold you accountable."

The Silicon Valley fairy tale of innovation and technological progress sold to Americans has turned into a corporatist nightmare of censorship and hypocrisy.

That legislative momentum, plus the social environment of political polarization, hate speech and violence against minorities, was reflected in the impatience of panel members as they questioned the three executives. Several lawmakers demanded yes or no answers and repeatedly cut the executives off.

The three staunchly defended their companies' efforts to weed out the increasingly toxic content posted and circulated on services used by billions of people while striving to balance freedom of speech. But while all three CEOs voiced at least some support for a revamp of current rules, they weren't aligned in support of federal agencies taking the lead on that effort.

Dorsey believes moderation rules could be improved by a more open process that brings stakeholders together in an effort that isn't necessarily directed by the feds.

Lawmakers raised various concerns about bias in moderation policy including those based on political and religious affiliation, race, language and the LGBTQ community.

Several committee members also questioned whether new products either already released or under development by some social media platforms that are being specifically geared toward children are appropriate given the current issues surrounding basic moderation policy.

And, Rep. Lori Trahan, D-Massachusetts, noted an uptick in practices employed by social media platforms that were unfairly drawing the attention of underage users.

"These applications introduce our children to social media far too early and include manipulative design features intended to keep them hooked."

While there continues to be partisan division over which content moderation issues are most significant, support is building for Congress to impose new curbs on legal protections regarding speech posted on their platforms.

Both Republicans and Democrats — including President Joe Biden, as a candidate — have called for stripping away some of the protections under the so-called Section 230 of a 25-year-old telecommunications law that shields internet companies from liability for what users post.

The tech CEOs defended the legal shield under Section 230, saying it has helped make the internet the forum of free expression that it is today. Zuckerberg, however, again urged the lawmakers to update that law to ensure it's working as intended.

He added a specific suggestion: Congress could require internet platforms to gain legal protection only by proving that their systems for identifying illegal content are up to snuff.