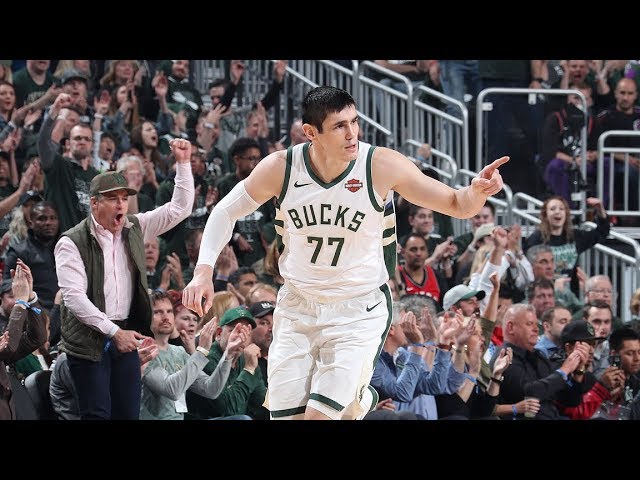 SALT LAKE CITY — Ersan Ilyasova likened it to be getting left behind. When the dust settled on free agency leading up the 2020-21 season, the 12-year NBA veteran found himself without a team.

"Sometimes it is what it is — it's part of the business," Ilyasova said, a day after signing with the Utah Jazz.

Part of the business is also having agents, and he happened to have a former one sitting in Utah's front office. Jazz general manager Justin Zanik represented Ilyasova early in the Turkish forward's career; when the Jazz had a roster spot to fill, it served as a pretty good foot in the door.

But Ilyasova needed to be ready to walk on through.

Despite not getting picked up by a team after being waived last November by Milwaukee, Ilyasova still believed he would play in the NBA this season. So, he used his suddenly wide-open schedule to do what he has done over the rest of his career: try to get better.

"I always tried to work on my game every day, stay ready," Ilyasova said. "I truly believed an opportunity would come at some point."

Days were filled with shooting and ball-handling exercises. He lifted weights and worked on his lateral quickness. He tried to stay in NBA shape as best as he could, hoping that someone would want his services in the latter part of the year.

Ilyasova has a long resume. He's averaged 10.3 points per game in a 12-year career and has shot 36% from deep as a floor-spreading big game. He's also played in 51 playoff games. He's got a lot of experience, and at only 33 years old should still have some gas in the tank.

Ilyasova has joined a team that isn't in need of a lot of help. The Jazz open up the second half of the season Friday at home against Houston holding the league's best record with three All-Stars. Ilyasova is well aware of all that, and he doesn't want to mess anything up. Still, he believes he can fit right in.

"The way they play, this is the way I play — obviously unselfish: if you're open, shoot, and share the ball," he said.

His relationship with Zanik aside, that is why the Jazz were interested in Ilyasova. Utah's success has been built a lot on a team-based system featuring some exquisite ball-movement and overall fun style of play — the front office didn't want to add a player that could jeopardize that.

"I don't think Dennis (Lindsey) and Justin (Zanik) and their group would have looked at someone if you couldn't plug and play," Jazz head coach Quin Snyder said. "I think the one thing we've been really conscious of is the chemistry of the team. And that's the case here. Ersan knows that, and he wants to be a part of that."

How big of a part will he have? That remains to be seen.

While Ilyasova has a knack for drawing charges — he drew the most charges in the NBA from 2015-20 by a large margin — he's not what you consider a plus one-on-one defender. He was never the fastest guy in the gym, and at 33 that foot speed has just slowed down. Snyder, though, praised his ability to guard multiple positions, which is something that should allow Ilyasova to be a good enough team defender.

"I think he's anxious to contribute in any way that he can," Snyder said.

That could be as soon as Friday — actually. It would be a surprise if his Jazz debut doesn't come against the Rockets.

Utah will face a depleted Houston team that's lost 14 straight and will be without John Wall, Victor Oladipo, Eric Gordon, Christian Wood, Danuel House and P.J. Tucker. There might not be another game this season the Jazz will be favored as much as they are against the Rockets. So, there should be at least a few minutes for Ilyasova to get into the game.

"We don't expect him to show up and be ready to go right away," Snyder said. "That's not to say that he won't be in many senses but, you know, there's an adjustment period. We're patient with him; I want him to be patient with himself."

That patience paid off this offseason as he waited for a call. Maybe it will again now that he's in Utah.