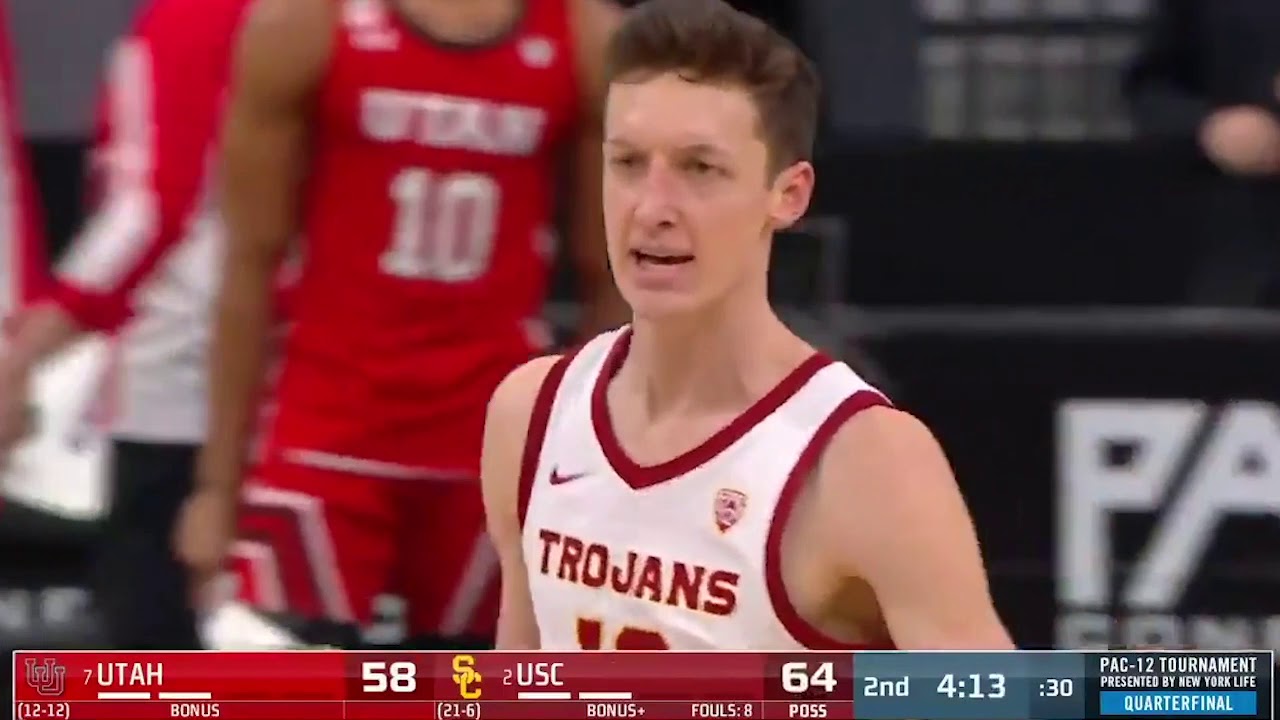 SALT LAKE CITY — Ahead of Utah's quarterfinal matchup against No. 21 USC in the Pac-12 Tournament in Las Vegas, Utes head coach Larry Krystkowiak wrote the word "believe" on the whiteboard in the locker room.

Believe that his team could hang with a team that is a lock for the NCAA Tournament, is one of the tallest teams in the country and features a likely lottery pick in the upcoming NBA draft in freshman Evan Mobley.

And whether it was just the pregame pep talk or a team not ready to give up on its season, Utah believed until the very end and took the Trojans to double overtime before Mobley showcased his dominance and lifted his team to a 91-85 win over the Utes. With the win, the Trojans advance to the semifinal round of the conference tournament at T-Mobile Arena.

"We're not going to win analytics or the eye test, but we're going to give you everything we've got," said junior Timmy Allen, who finished with a team-high 20 points, 13 rebounds and three assists in the loss. "I'm just proud to be part of it, to be honest. I was convinced we were gonna win, but obviously didn't end up that way.

"That's one of the craziest games I've ever been a part of, but a lot of respect to those guys. Evan Mobley is a problem."

Mobley had just 2 points in the first half after picking up his second foul just 7 minutes into the game. But the freshman made up for it, particularly in both overtime periods, and scored a team-high 26 points, nine rebounds and five blocks. Five other players for the Trojans scored in double figures, with Isaiah White scoring 14 points and grabbing five rebounds before fouling out of the game in the first overtime period.

Utah made overtime possible after trailing by 10 with 12:34 left in the second half, but slowly started to chip away at a USC team that had an answer for nearly every run Utah tried to make. Utah never quit, though, and eventually cut the lead to 1 before USC, again, made it a two or more possession game.

The freshman, who finished with a career-high 18 points and two rebounds, hit both free throws to tie the game up before White narrowly missed a last-second heave from half court to win in regulation — overtime.

In overtime, the Trojans got the advantage of the whistle and went 7 of 8 from the free-throw line — five of which were from Mobley — but Utah's Alfonso Plummer refused to give up and drilled a 3-pointer with 34 seconds left in overtime to tie up the game. The bucket would eventually send the game to double overtime.

Mobley went to work in the second overtime period and was unstoppable against a Utah defense decimated by four players that fouled out of the game — Martinez, Allen, Mikael Jantunen and Riley Battin — and Branden Carlson with four fouls. The Trojans used that advantage to claim the win — survive and advance.

"That game was life or death. I was locked in," Allen said. "One of the players on the other team said 'how are you not tired yet, you've played the whole game?' ... I was tired but I wasn't tired-tired. I was locked in and I was ready for whatever. I was ready to go another five minutes if we had to to win."

"This is one of those games I'm going to remember — there was just no quit in us," Krystkowiak said as he fought back emotions. "We were outnumbered, we were playing against an elite team and our guys — there was no quit. We got down 10, we got down a number of times and stayed in the fight. I'm one of the brothers with them and I couldn't be more proud of the way they handled themselves on and off the court — pretty special."

Big man coming in clutch for @UtahMBB in the final minute of OT to push it into double OT!

Utah controlled a 4-point lead midway through the first half and took every punch the Trojans gave before USC reeled off a 9-0 run to flip the advantage amid a long-lasting scoring drought from the field for the Utes. Utah hit a bucket with 9:19 left in the half and didn't score another field goal until Martinez drilled a 3-pointer with 2:46 left.

By the time Martinez hit his shot, USC had built up its lead to 9 and had firm control of a half that was mostly played without Mobley, due to his two fouls. But his absence didn't seem to shake USC's confidence as the Trojans outscored the Utes 20-8 in the paint to build a 34-29 halftime lead.

Neither team had a player score in double figures at halftime, but Martinez led Utah with 8 points and White led USC with 9 points at the break.

Rylan Jones was out again for the Utes on Thursday with a right shoulder injury. Jones has missed four straight games and was out for his eighth of the season — he only played 2 minutes against USC in February at the Huntsman Center before leaving due to re-injuring his right shoulder.

Utah's season has come to an end after finishing 12-13, just under .500, and has the potential for some changes to the makeup with its team due to players exploring professional careers, but Krystkowiak said he hopes to see everyone back as the team continues to be "on the rise."

"I just made it clear in the locker room, I would love to have everybody back coaching this group again," Krystkowiak said. "We can lace it all up, everybody can come back, got a couple of additions to the roster. So, you know, I remain optimistic. Guys can work on their basketball game but we can come back as a brotherhood and hopefully play in front of fans. I have no questions in my mind, you know, contrary to a lot of the noise that this is a program that is on the rise.

"Usually when the season ends, I'm kind of ready for a vacation," he said. "I would love to keep coaching them. I think the hardships have made us individually stronger, but we've learned to depend on each other. I'm thrilled."