SALT LAKE CITY — The Utah Senate moved a controversial bill setting the process to rename Dixie State University to the Senate Education Committee late Friday, after letting the legislation sit in limbo for more than a week.

When the committee may debate HB278 has not yet been posted on the Utah Legislature's website. The legislative session ends at midnight on March 5.

The bill, sponsored by Rep. Kelly Miles, R-South Ogden, passed handily in the House by a vote of 51-20 on Feb. 10. After it was transmitted to the Senate, some sources said it would not be considered further.

However, in recent days Senate leaders said they will debate the bill, although some have expressed concerns about a lack of buy-in from community members. Some area residents say the push for a name change was fueled by external forces and akin to "cancel culture."

DSU President Richard "Biff" Williams said the name change had been discussed for decades. A recent impact study commissioned by the university revealed that the name presented challenges for students who were applying to graduate schools or seeking employment following graduation.

Earlier this week, a group of Dixie State University students rallied outside the Capitol to urge the Senate to release the bill for debate. Some student leaders also met with Senate leaders to explain what was at stake for students. 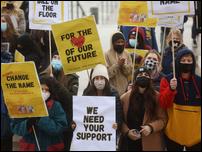 As Dixie State students rally at Capitol for name change, senator says bill will be debated

Utah Senate leaders announced they will debate a bill to start a name-change process for Dixie State University in an about-face after student protesters traveled from the southern part of the state to the Capitol in Salt Lake City to make their voices heard.

At the time, the university issued a statement that said, in part:

"It is now clear that the name is creating measurable and widespread negative impacts on our students, alumni, and institution. Out of respect for our students and the hard work they put into earning their degrees, the university feels it is paramount that the bill is heard on the Senate floor this year."

The statement notes the proposal to change the university's name was unanimously supported by the DSU Student Association Executive Council, University Council, President's Cabinet, board of trustees, the Utah Board of Higher Education, all college and university presidents from the Utah System of Higher Education System and a veto-proof majority of the House of Representatives.

"As an institution of higher education, we have a deep responsibility to look out for our students' continued success and appreciate the Senate's dedication to Utah's future workforce. We look forward to working with our senators as they work to bring this bill to the Senate floor," the statement said.