SALT LAKE CITY — Utah Gov. Spencer Cox joined 16 other GOP governors across the country urging President Joe Biden to rescind his executive order banning any new leasing for oil and gas on federal public lands, stressing that the energy sector means much more than just a tank of gas.

"There are many parts of our country where energy is more than a utility bill or tank of gas — it's a job-creating industry that provides good careers and steady paychecks to families in rural areas and small towns. Where the recent surge in oil and natural gas provided jobs and created wealth when we needed it most, the order will drastically hinder the ability of the oil and gas industry to recover, both onshore and offshore, as the effects of the COVID-19 pandemic subside," the letter dated Monday said.

The letter went on to emphasize that the order Biden signed during his first day as president has a particularly negative economic impact on Western states with large tracts of federal lands, as well as Gulf Coast states, chasing away capital investment impacting an array of services that include education and public safety.

"Beyond directly impacted states, the order is estimated to spike American residential energy costs by $1.7 billion per year," the letter said.

The order has been lauded by environmental groups and climate change activists as a step toward tamping down fossil fuel emissions and forcing a wider embrace of "green" energy such as wind turbines and solar farms. While it has only been in effect just over a month, the order is already leading to layoffs in the energy sector.

Biden also yanked the permit for the construction of the Keystone pipeline, resulting in the layoffs of more than a 1,000 people, even as the United States for the first time in decades became energy independent, exporting more energy than it imports.

The letter by Cox and other governors emphasizes that Biden's practices will merely shift production to foreign and possibly hostile nations where environmental regulations are not as stringent, amplifying levels of fossil fuel emissions, not abating them.

"To meet consumer demand and stabilize our electric grid, we depend on energy produced on private land and public land — we need both," the letter said. "Simply put, the order jeopardizes our national security interests and strips away the opportunity for Americans to be energy independent."

The order is part of Biden's ambitious embrace of a climate change agenda targeting fossil fuel emissions to slow a warming climate that a majority of scientists say is leading to increased wildfires in the West, sea level rise and jeopardizing wildlife and their habitat across the globe.

Utah and other fossil fuel rich states were collectively holding their breath after Biden's presidential election victory, which was seen as a harbinger of a sharp U-turn from former President Donald Trump's energy dominant agenda.

It took just his first day in office for those states to realize their fears, and not long after for his ban to prompt a lawsuit from the oil and gas industry challenging the ban.

The Western Energy Alliance, representing independent oil and gas producers in Western states, on Monday launched an advertising campaign that is running on digital music streaming services in states that produce the most oil and natural gas on public lands, including New Mexico, Wyoming, Colorado, Utah, and North Dakota. 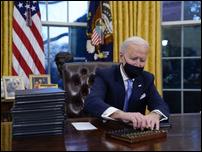 "President Biden has decided to sacrifice the livelihoods of tens of thousands of hard-working Westerners to appease environmental activists in his party," said Kathleen Sgamma, the alliance's president.

"The folly of their ultimate agenda to stop all American oil and natural gas production has been on full display in Texas. People are seriously harmed when they don't have access to reliable, affordable energy that keeps them warm in the winter with the electricity running. By disadvantaging Western production, he's adding further instability to the energy sources all Americans rely on," she said.

In the letter from Cox and the other governors, they criticize Biden for failing to follow through on his promise to seek unity.

"You began your presidency with calls for unity, specifically to end the divide that pits urban versus rural, and as Republican leaders, we stand ready to work with your administration to advance our states and country," the letter said. "In contrast, the lack of consultation with our states demonstrated by Executive Order 14008 is alarming, showing disregard for the citizens we serve and the businesses that employ them and keep our country running and our nation secure."

Biden's order canceled a planned oil and gas lease sale in Utah in March of more than 7,000 acres.

Fossil fuel critics and others say industry is overblowing the effects of the "pause" on oil and gas leasing, pointing to millions of acres of undeveloped leases and stressing there will be little short-term effects.

"We are pleased the Biden administration announced the postponement of the upcoming oil and gas lease sales," said Autumn Hanna, vice president of Taxpayers for Common Sense. "Instead of adding more leases to the pile, this decision will give the administration time to ensure that our public lands policies are reformed to ensure a fair return for taxpayers. We applaud the administration's commitment to stop the waste and look forward to concrete next steps to bring the federal leasing system into this century."