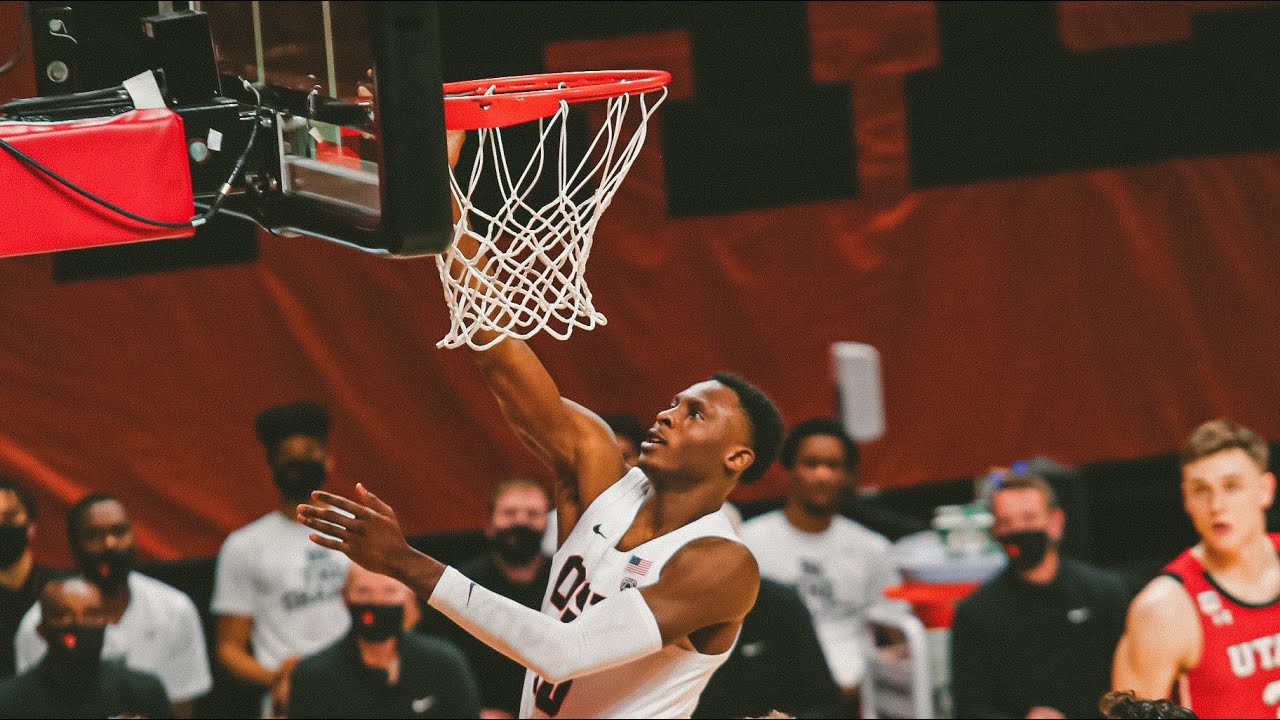 SALT LAKE CITY — For three minutes of the second half, Utah's Branden Carlson was untouchable.

The sophomore center who played only three minutes of the first half due to picking up two quick fouls, made up for lost time and reeled off a quick 10 points to give Utah a 5-point lead (its largest of the game) to take control of a game that lacked any really shooting prowess up to that point.

But that short spurt from Carlson was the closest Utah would come to a win as Oregon State went on a 19-3 run of its own behind aggressive post play by Rodrigue Andela and Ethan Thompson over a seven-minute period — a slow-growing lead — to pace the Beavers to an eventual 74-56 win.

"We kind of stopped playing like the way we were," Carlson said. "We were playing good, we were playing together, and I think after that we kind of just let them get into us a bit, let them go on runs, didn't make our shots and pass the ball. There's just a lot of things — turned it over."

Over that same time period, Utah (9-9, 6-8) failed to score a single basket out of eight field goal attempts and made only two out of 10 field goal attempts, in addition to five turnovers to build on an already high first-half turnover performance (10).

"There was a lot of sloppy play, I thought — ill-advised passes," Utah head coach Larry Krystkowiak said. "The correlation is so strong in this game: When we actually executed, which we did very little — we did coming out of the second half — you're only going to be as strong as your weakest link as an offensive and defensive unit, and offensively, it seemed like we had one person that wasn't involved with our execution and then you can kind of make things up and at times we look like a deer in the headlights, but that was the story of the game."

Thompson led Oregon State (11-10, 7-8) with 25 points, eight assists and five rebounds and was a large reason for the Beavers scoring 26 points off 20 total turnovers from the Utes in the win. He was joined by Warith Alatishe, who had 19 points, nine rebounds and four assists.

It was all too much for the Utes, but it really came down to the Utes beating themselves in a game they were expected to win despite being on the road.

"I've never had a problem with a team beating us, but I really feel like some of this is self-inflicted right now and we're doing a pretty good job of beating ourselves, and that can't happen," Krystkowiak said.

Junior Timmy Allen led Utah with 24 points, nine rebounds and five assists in the loss and was about the only good thing to go well for the Utes in the first half. The team's leading scorer had 12 points on 4-of-6 shooting from the field, was a perfect 4-of-4 from the free-throw line in the half and was one of the only aggressive players on the court for the Utes.

Beyond that, Utah struggled to put together a consistent half of basketball. Utah shot 36% from the field, including a five-minute scoring drought late in the first half that featured only one made basket on nine field goal attempts, and the Utes had 10 turnovers that led to 12 Oregon State points. It was the same type of result for the Utes in the second half, but with a large margin as Oregon State outscored Utah 44-32 in the final half.

Oregon State wasn't much better than the Utes in the opening half, shooting 38% from the field with multiple scoring droughts. The Beavers had eight turnovers, but Utah could only manage 4 points off those turnovers. Still, it was enough to give Oregon State a 6-point halftime advantage (30-24).

Utah was again without starting guard Rylan Jones, who missed his third consecutive game due to a right shoulder injury, as well as starting forward Mikael Jantunen, who is in Europe with the Finnish National Team for a time.

"We have a lot of fight in us, we just can't beat ourselves throughout games and down the stretch, especially on the road," Allen said.