SALT LAKE CITY — In an effort to head off potentially more restrictive measures, Utah egg-producers have been working with legislators on a bill mandating a cage-free environment for hens by 2025.

"Without egg farmers being a part of this conversation, policy would have been written into law that would not be aligned with our production standards and animal husbandry principles, and placed on a timeline to compliance that would be both physically and financially unattainable as a family farm and as an industry," Jeremy Rigtrup, owner and operator of Rigtrup Egg Farm, said.

The driving factor for SB147, sponsored by Sen. Scott Sandall, R-Tremonton, is to provide commercial egg producers with time before a ballot referendum mandating stricter rules could get filed in Utah as has happened in other states, he said.

On Tuesday, the bill passed the Senate, 27-1, on its second reading, with Sen. Lincoln Fillmore, R-South Jordan, voting against. It must pass one more Senate vote before heading to the House.

Cliff Lillywhite, co-owner and CEO of Oakdell Egg Farms, said the number of egg farms in the state dropped from 15 farms in the early 20th century to five today.

Rigtrup said the bill was necessary to ensure "a thriving egg industry remains in place in Utah for years to come."

SB147 would require farms with 3,000 or more egg-laying hens to have enclosures that are completely cage-free by the year 2025. Also by that time, Utah grocers will only be allowed to sell eggs obtained from a caged hen if that they are 10% or less of the total number sold in a year or if the business sells "fewer than 15 cases of 30 dozen shell eggs per week." 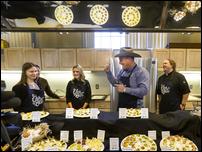 In 1905, Cecil and Bertha Woodward received 10 chickens as a wedding present. Millions of eggs and 114 years later, Oakdell Egg Farms is still going strong, contributing to the state’s 2018 record production of 1.5 billion eggs.

Sandall said this 10% exception was specified due to the one to two cent cost increase, per egg, that organic, cage-free eggs will be.

"Currently caged eggs are a little less expensive to produce and (we) didn't want to hurt the welfare of our lower-income people," said Sandall.

The Utah Department of Agriculture and Food can impose civil fines as well as issue temporary restraining orders or even a permanent injunction for violations.

According to Rigtrup, if the bill passes the Legislature, the Humane Society of the United States and the World Animal Protection Group promised they will not push initiatives related to egg-laying operations in Utah.

According to its website, in a little over six years since the national Humane Society campaigned for changes at chicken farms, almost 25% of all eggs produced in the U.S. are cage-free.

Lillywhite and Mark Woodward, owner of Oakdell Egg Farms, reached out to Sandall to craft SB147. They offered Sandall a tour of their facilities and pleaded their case.

It's actually quite a phenomenon to see that those birds kind of train themselves to go into what is the nesting area in the building, lay their eggs and then those eggs are actually moved out (on a) conveyor belt, the same way they are in a caged facility.

Sandall says that the bill will remove the hen from small cages and place them in a building with an area where there is minimal fencing.

Sandall said a completely cage-free system "allows the birds access to ground floor and up on different levels where they roost."

"It's actually quite a phenomenon to see that those birds kind of train themselves to go into what is the nesting area in the building, lay their eggs and then those eggs are actually moved out (on a) conveyor belt, the same way they are in a caged facility. Those eggs are rarely touched by hands until a consumer picks them out of the grocery store," Sandall said.

I would never support this bill if the egg producers didn't ask for it. I'm angry about threats that have been hung over their head.

In a hearing of the Senate Natural Resources, Agriculture and Environment Committee last week, lawmakers expressed concern about how the bill came about.

"I am not happy with this bill. I would never support this bill if the egg producers didn't ask for it. I'm angry about threats that have been hung over their head. I listened to 215 years of production that haven't seemed to be a problem. But I'll support it on their behalf. You're welcome in rural Utah," said Sen. Derrin Owens, R-Fountain Green.

Sen. David Buxton, R-Roy, said he was appalled with the rhetoric of animal activists saying "we're going to blackmail you into laws and regulations" when it came to a cage-free production system. Despite his feelings, Buxton said he'd support the bill because the egg farmers backed it.