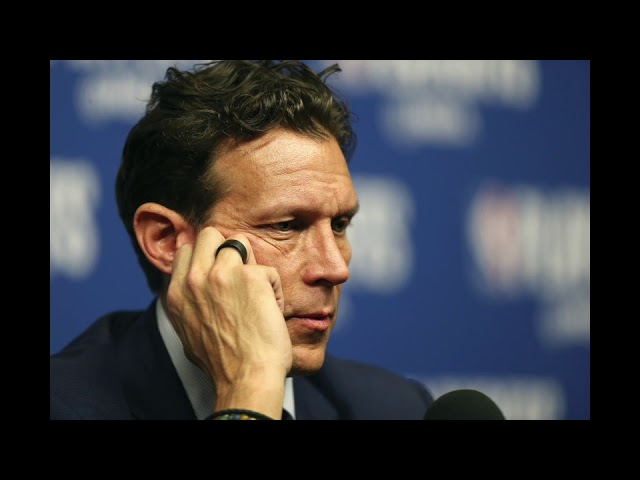 Quin Snyder on his journey and Utah's offensive progression

SALT LAKE CITY — It was a simple question: What style and era of basketball do you prefer?

The query could have been answered by Utah Jazz coach Quin Snyder in a number of ways. He could have talked about his time at Duke or about his days coaching at Missouri; he could have expanded on his days in the former D-League in the San Antonio Spurs' organization; he could have mentioned what he saw as an assistant in the NBA or how the game was played during his time overseas; he could have even pontificated on how his Jazz squad, the team with the best record in the league, has expanded its game.

Or he could have done it all.

In a response that went over 10 minutes, Snyder went through nearly his entire coaching journey — and by doing so, let on just how the 2019-20 Jazz became title contenders.

You could say the seeds of Snyder's space-based system were planted when he was on Duke's Mike Krzyzewski's staff. The Blue Devils spaced out on the perimeter — even often playing with a shooting power forward — to give space for players to drive inside. Basketball philosophy aside, Snyder took a bigger lesson from his six years there.

"One of Coach K.'s many strengths was his ability to adapt," Snyder said. "I think that's why he's had so much success, over the years."

That's a lesson that followed Snyder to Missouri, where he said he played with two traditional bigs but also a 6-foot-4 power forward — "Part of my evolution as a coach has been the opportunity to see different ways to play and different styles," Snyder said — and into the D-League where he coached the Austin Toros.

The first thing he had to do when he arrived with the Toros in the San Antonio Spurs' system was learn the team's fundamental core-motion offense. That's not unique; it's the normal set up for any affiliate club. The Salt Lake City Stars, for example, play the same system as the Jazz.

But Snyder soon realized that his players in Austin didn't match what Gregg Popovich had in San Antonio, so he asked if he could deviate from the system.

"I can recall talking to Pop and just saying, 'Our personnel is so different. Is it OK with you if we play differently?' He was absolutely supportive. We became really a pick-and-roll team, and had multiple handlers — similar to what we have now (with the Jazz)."

Snyder moved around a lot after his time with San Antonio. He spent a year in Philadelphia, followed by a season with the LA Lakers. He then coached a year in Moscow before joining Mike Budenholzer's staff in Atlanta — four years, four different assistant positions. That proved to be a valuable learning experience.

"One of the things that I benefited from the most is not only did I have a chance to work for Doug Collins, Mike Brown, Mike Budenholzer, but it was everybody's first year," Snyder said. "... I really got to see the way that your philosophy as a coach, when implemented, has to evolve and adapt to your personnel. You don't know those things always on the front end."

Early seasons with the Jazz

When he arrived in Salt Lake City as the new Utah Jazz head coach in 2014, the league was going through an evolution. The Golden State Warriors were about to embark on the first championship of their dynasty runs and the NBA was adapting to a new wide-open style of play. Teams spread out the floor, run and shot threes. While Snyder was in Atlanta, the Hawks took nearly 26 3s per game; he inherited a team that averaged just 19.

"I can remember coming from Atlanta and the rage in the league was pace in space and that was not necessarily my expectation, but in the immediate past that's the way we have played," Snyder said. "We had Enes Kanter, Derrick Favors, Trevor Booker, Rudy Gobert, and we were starting two bigs. And that was our team. We weren't a pace and space team.

"I can recall questions about that. And as I evaluated it, that was not the best way for us to play. We weren't going to space the floor, we needed to move the ball and grind through a possession. We were like a football team that runs the ball, and hopefully in the fourth quarter we would wear you down and play great defense. That style in one way or the other fit that team."

He wasn't going to box the Jazz into a certain style of play. Sure, the Warriors were taking over the league by playing a fast and open style but could Utah with Gordon Hayward, Trey Burke and Joe Ingles on the perimeter really outshoot those guys?

"I think we were at the bottom of the league in terms of pace and we didn't shoot a lot of 3s because that again wasn't the strength of our team and we tried to be really good at what we did. And to me, that's the important thing. The Warriors at that point were redefining the league as far as pace and space and shooting. If we tried to play that way against Golden State, that was their game."

But through the years, the Jazz roster changed, making way for a team that is less about "running the ball," to use Snyder's football term, and one that is focused on airing it out. It's a further sign that Snyder is not committed to playing a certain style, but instead building one around the players he has.

You give him a team with big roles for Ricky Rubio, Rudy Gobert, Jae Crowder and Derrick Favors, it's going to be a slower-paced team with a focus on defense. But with Bojan Bogdanovic, Mike Conley, Jordan Clarkson and Donovan Mitchell in the fold, they can get out and run.

"Your job is to try to adapt what you do to fit your personnel and the underlying philosophy for me is not changed," Snyder said. "We talked about being obviously unselfish and ball movement and quick decisions. But what those decisions were, or are does change. So last year with the addition of Bojan ... and then with JC, and with Mike, our style was evolving.

"I think for a group of guys that has played a certain way for a period of time with Donovan playing with Ricky Rubio and Jae and Rudy and that group, that was a different makeup of the team. So we've tried to continue to adjust and adapt and evolve."

This season, the Jazz are taking 42 3s per game and hitting on over 40% of them. The Jazz have taken the aspects of Snyder's offense that have always been prevalent (ball movement, drives, the blender, screens) and turbocharged it with quick shots and lots and lots of 3s. The result is an offense that is averaging 118.9 per 100 possessions when factoring out garbage team, according to Cleaning the Glass.

"We shoot the ball so well right now," Snyder said. "Those teams as other teams have different strengths. This (shooting) is a strength now. So the question becomes how can you play to your strengths? That means kind of redefining for some guys how they've played over a period of years, and really helping them understand why it is we're doing what we're doing."

So it's not just Snyder that has adapted — Utah's players have, too.

"We don't need to be as open to shoot. ... Oftentimes a look early in the possession is going to be a better look than we get later in the possession," Snyder said. "The more you move the ball, the chances of you making a mistake become greater. If you come down and shoot without passing the ball, you're probably not going to turn the ball over."

Snyder said the team is still trying to find the perfect balance over when to shoot quickly or when to run through one of Utah's complex sets. But the big key is not to pass on an open shot.

"Moving the ball is something that I think is where some growth can continue to occur for us," Snyder said. "I'd like us to not pass shots up because when we're driving closeouts, we may not get a better shot. That said, there's plenty of times to make an extra pass and for our guys finding that balance has been really important and I think that's what's taking time.

In short, Snyder is never going to be mad with a shot — and that attitude has trickled down to the rest of the team. In a game earlier this month, Gobert got the ball and was open in the corner. He lifted the ball up and for a second it appeared as if he was going to shoot. That might have been the one time Snyder and the Jazz would have questioned a 3-pointer (though since the Jazz held a big lead, it would have been easily forgiven.

"The key is everybody has given everybody else on the team permission to take those shots," Snyder said. "If Georges (Niang) takes a shot after one pass, Joe's not feeling like, 'What's he doing?' … that's the trust. I think the unique thing about this team is they trust each other. And they really are our shots, it's not one person's shot.

"I think, collectively, that mindset is something that's really important," Snyder continued before concluding, "So that's a long answer but it's a pretty comprehensive one."