SALT LAKE CITY — A bill to drop the permit requirement for Utahns to carry a concealed firearm sailed through the Utah House of Representatives on Tuesday, coasting on a mostly party-line vote.

Rep. Walt Brooks' HB60 now heads to the Senate for consideration, where the bill is expected to be supported along similar party lines. Gov. Spencer Cox has also indicated he's supportive of a "constitutional carry" bill, even though former Gov. Gary Herbert vetoed a past attempt.

The House voted 54-19 to approve the bill, but not without first changing it on the House floor to specify that any unused funds from the remaining permit fees be transferred to the state's Division of Substance Abuse and Mental Health for suicide prevention initiatives and educating the public about safe storage of firearms.

That change was sponsored by Rep. Steve Eliason, R-Sandy, and co-sponsored by more than 30 other House lawmakers. Eliason argued that using those leftover funds will help "mitigate" risk of potentially fewer Utahns taking the concealed-carry permit class, which includes a video on risks of youth suicide when firearms aren't stored properly.

"Some will lose that educational opportunity," Eliason said, noting that 162,000 Utahns last year watched that video as part of their concealed-carry training. He acknowledged it's not clear exactly how many will opt out of taking the class — which will still be available even without the permit — but using those funds, "we believe, will continue to help Utah reduce the number of individuals that die by suicide."

Brooks called Eliason's substitute bill "friendly" and welcomed it. But he said he trusts Utahns to be responsible gun owners, and predicted many will continue to take the class even without the permit requirement.

"This bill allows law-abiding citizens to be able to carry their weapons to protect themselves," Brooks said. "Legal and law-abiding citizens do just that. They're careful, and they're responsible, and they don't need the government to force them to do something that they would do on their own anyway. I trust the people of Utah."

Brooks noted that most states don't track what happens when they drop permit regulations but "Kansas does." Citing Kansas data, Brooks said "their permits went down. That would be logical. But the class attendance went up. Why? Because law-abiding citizens are accountable and responsible for their actions. They go get the training."

Brooks said 19 states have some version of a permitless concealed-carry law. He cited a 2019 study by the Journal of the American College of Surgeons, which found state concealed-carry laws had no impact over 30 years, from 1986 to 2015, on homicide, violent crime and public health indicators.

"The perception is that this bill is huge," Brooks said, "but the reality is it's very, very focused on, 'Can I take my legally open carried (gun) and cover it with my jacket?'"

To concerns about whether his bill will lead to more suicides or accidents, "those are all important and should be addressed. But making someone get a permit doesn't resolve that issue," he said. "Because I'm allowed to put my jacket over my gun does not increase suicide."

"This is not just a left issue or a right issue," Brooks said. "This is a good issue backed by good policy."

But Democrats like Rep. Carol Spackman Moss, D-Holladay, opposed the bill. Although she said she's a Second Amendment supporter, she expressed concerns about the "perception" that not requiring a concealed-carry permit would lead to more people carrying guns.

"What I hear from my constituents is more about perception," she said. "They overwhelming they (say) they're opposed to this because they perceive it to open the door to many more people carrying guns that aren't properly trained."

Nelson questioned "what problem does this bill solve" and argued it created "classic tension between political expedience and good public policy." As a Republican, Nelson said it would be a "dangerous vote" for him, noting that if he voted against it he would be "targeted by the NRA, they've made that clear."

"So come next election I will be painted as someone that's anti-gun, anti-Second Amendment," Nelson said. "When nothing could be further from the truth. I am pro Second Amendment. I love guns. I own guns. I use guns. But the question really is what is good public policy?"

Nelson said the issue came down to constitutional rights and public safety. He didn't agree that it should be called a "constitutional carry" bill because Utahns can already openly carry a gun without a permit. He noted courts have upheld the concealed-carry permit requirement as "perfectly reasonable and proper under the constitution." 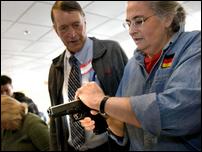 Will Utah become the next state to drop concealed carry permit?

A Utah lawmaker is furthering his bid to make Utah the next state to allow concealed carrying of firearms without a permit.

Nelson said lawmakers have to ask the question: "Which poses the greater danger to society? A concealed weapon or an openly carried weapon?"

He argued passing the law will only take Utah "one step closer to the wild West."

"Removing this permit requirement will make our society less safe," he argued. "We have nothing to gain by passing this law. It solves no problem. But we have much to lose."

Nelson also argued law enforcement would be able to easily identify a weapon — and therefore a greater threat — if an "agitated constituent" comes to the Utah Capitol with an open weapon as opposed to if they were carrying a hidden gun.

To arguments that law-abiding citizens follow laws and criminals don't, Nelson said that isn't a good enough argument to not create or keep laws.

"What about other criminal laws? ... Do we repeal those laws just because bad guys ignore them, or do they serve some purpose?" he said. "I have to believe that our laws have some impact, have some deterrence ... I have to believe they make a difference. Otherwise, why are we here?"