SALT LAKE CITY — While one Utah lawmaker is hospitalized with COVID-19, two other lawmakers tested positive for the disease Monday.

Rep. Jon Hawkins, R-Pleasant Grove, has been absent from the Utah Legislature since the beginning of the legislative session last week. A post on his Facebook page Sunday stated he's "not participating" in the session "as he is in the hospital battling COVID-19 at this time."

"No matter your political affiliations, we would request that we all come together in prayer for Jon and his family," the post states, requesting privacy for the Hawkins family.

House Speaker Brad Wilson issued a statement later Monday, saying Hawkins' "jovial nature" has been missed at the Legislature during his absence.

"We've been in regular contact with his family to stay up to date on his condition and to offer the collective best wishes of the House," Wilson said, offering no details about Hawkins' condition as of Monday. "Rep. Hawkins is a well-respected and esteemed member of our body and we hope to have him back at the Capitol, representing his constituents as soon as he is back to health."

Weiler, who told the Deseret News on Monday he wasn't feeling any symptoms, said his daughter's boyfriend tested positive for the virus Sunday, so he's "pretty sure that's where I got it" from an exposure on Friday. He said he went to the Capitol on Monday morning "expecting a positive" from rapid testing. He noted that he was "very careful" when he came in to the Capitol, so he wasn't worried about spreading it to others.

"I kind of figured I'd get it," Weiler said. "I'm surprised it took this long. ... I'm hoping it will be mild. If I had to get it during the session, I'm glad it was at the beginning as opposed to the end."

Weiler participated virtually in Senate floor time on Monday, while Ipson was absent.

"I'm glad that we have (rapid testing). I think it will help us avoid a major outbreak," Weiler said, pointing to the Missouri House of Representatives, which shut down earlier this month due to a COVID-19 outbreak.

Although Ipson sat in close quarters with other Senate leadership during a media availability late last week, Adams said he did not believe any legislators were quarantined Monday due to close contact with Weiler or Ipson.

"Right now, we're not aware that anyone had close contact," Adams said. "We think the system is working. We're monitoring it really closely."

Asked whether the positive COVID-19 cases is a "bellwether" of more to come to the Capitol — especially considering Monday marked the first day for in-person public participation — Adams said "let's hope not."

"I believe in Utah," he said. "We, again, are trying to work together and trying to get the people's work done. We'll see what happens. I won't predict the future."

As for when there may be a change in protocols, closures or limits on the number of lawmakers in the building, Adams said "we're monitoring it closely and we'll make that determination."

"We have a system we set up that is functional," Adams said, noting that the session can continue both in-person and virtually as needed.

Adams also said about 17 senators have either been vaccinated or have had COVID-19 already. 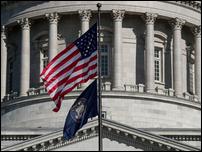 "We feel fairly confident that we can continue to maintain a quorum in the Senate and that if we have to do some virtually, which we've made accommodations for, we will do that," Adams said. "But our intent is to try to make it work. And it appears it is. And we knew we have some people who have actually contracted COVID, and I think right now it appears to be working. The best example is Sen. Weiler this morning. So we're doing our best."

Weiler said he was pushing a few weeks ago for everyone allowed in the Capitol to be tested every day, "and we're not doing that, but I think that would be, in my opinion, the most prudent thing to do."

Rapid testing is available — not required — every morning for lawmakers. Legislative staff and interns are also being tested.

News of more cases on Capitol Hill came hours after an early morning committee meeting was briefly shut down because three anti-mask protesters showed up to a House Building committee room brandishing fliers.

"We're going to go ahead and pause," said Sen. Jake Anderegg, co-chairman of the Social Services Appropriations Committee, about an hour into the committee's business when the protesters walked in without wearing masks.

"We've just received direction from House and Senate leadership that we need to take a break on our committee," Anderegg, R-Lehi, said. "We have members in the audience that are not complying with the health department rule for masks."

Anderegg then directed those lawmakers participating in the meeting in person move to their offices and join the meeting online after a roughly 5-minute delay.

"This is being done so we can continue keeping the Capitol open," Anderegg said. "That is a health order — whether I agree with it or not — a health order that we must comply with."

Rep. Paul Ray, R-Clearfield, told the Deseret News later Monday that every time a Utah Highway Patrol trooper tried to talk with the protesters, "they turned their phone on and recorded the whole conversation with the trooper, so we knew they were looking just to cause a problem."

I kind of figured I'd get it. I'm surprised it took this long. ... I'm hoping it will be mild. If I had to get it during the session, I'm glad it was at the beginning as opposed to the end.

"This committee of all committees," Ray said, noting that "a lot of high-risk individuals" attend the meetings to testify about their underlying health conditions. "If you look at the comorbidity issues that's pretty much most of our typical audience in here. So we need to keep everybody safe."

"I never thought that would happen," Ray said. "The rule is, if you want to come to the Capitol you have to wear a mask."

"I hate masks," Ray added, "but I'm going to follow the rules because it's not for my safety."

Ray said he's already had COVID-19, but the mask precaution isn't for him. "We've all had it or are having it. But you have high-risk people specifically in social services that we really have to pay attention to. We can't do this and put their health at risk."

Ray said those protesters were told to leave the meeting but were not arrested.

If any other members of the public are thinking about going to the Capitol to protest the mask mandate, Ray wanted them to know "the majority of us in the Legislature don't like masks either."

"You know, we're here because we need to do the people's work and we have to do it safely," Ray said. "Therefore, the governor has mandated the mask, and we're going to wear a mask."

Sen. Gene Davis, D-Salt Lake City, referring to the committee meeting that had to be shut down, said "this is the reason masks are needed."

"We need to make sure that we protect one another from spread of the virus," Davis said.