Masked up and rapid tested, Utah lawmakers back to business in heavily guarded Capitol

SALT LAKE CITY — Utah's legislative leaders kicked off the 2021 general session Tuesday with messages of a bright future despite challenges due to COVID-19.

"Beyond the physical effects of COVID, the global pandemic has caused widespread economic hardship, social disruption, and mental health issues. Discouraging news about the pandemic, natural disasters, and civil unrest have seemed to arrive at a tempo that left moments of reprieve few and far between," said House Speaker Brad Wilson, R-Kaysville, in his opening day speech on the House floor.

"But in the midst of all this tragedy, we have seen Utahns facing adversity with determination, overcoming challenges with innovation, and lifting others with compassion," Wilson said.

Wilson and Senate President Stuart Adams' opening speeches Tuesday sought to focus on priorities beyond COVID-19 — from education funding, to a tax cut, mental health, and more — but the strangeness of lawmakers working amid a pandemic dominated, at least visually.

Masked lawmakers in the House listened behind panes of plexiglass installed on each of their desks. The Senate Chamber did not have plexiglass between lawmakers' desks. Senate President Stuart Adams said that was because the open layout in the House is more functional for plexiglass, and would not be conducive in the Senate's tighter chamber.

Adams said everyone in the Senate chamber tested negative for the disease prior to Tuesday's floor time. House Chief of Staff Abby Osborne said all House members who participated in person on Tuesday also tested negative. Everyone in both chambers appeared to wear masks or other face coverings throughout the morning's business.

The Capitol's hallways were bizarrely quiet, temporarily closed to the public. No lobbyists, no crowds of schoolchildren. Only lawmakers, media and law enforcement roamed, while legislators spent most of their day in the confines of their chambers. No protesters had appeared outside the building, although dozens of armed Utah National Guard soldiers walked the Capitol's halls, many with shields and riot gear.

Lawmakers still plan for a hybrid 2021 session, with options to participate online and in person, but they decided to close Utah's Capitol Hill to the public for at least the first week of the session after the storming of the U.S. Capitol in Washington Jan. 6 and as more protests are anticipated nationwide ahead of President-elect Joe Biden's inauguration ceremony Wednesday.

Rapid COVID-19 testing — and a handshake ban — are new realities for Utah lawmakers this session, as legislators hope to avoid a COVID-19 outbreak on Capitol Hill, which has been referred to as a "petri dish."

"As vaccines begin to be administered across the state, now is not the time to let our guard down," Wilson said. "As we spend the next 45 days in close quarters, we must remember that some among our colleagues and staff — and their families — have conditions that put them at increased risk of complications if infected. Under these far-less-than-ideal circumstances, we should all do our part to protect one another so we can continue the work of the people of Utah."

Some had hoped the Legislature wouldn't meet at all until lawmakers allowed the public inside the Capitol. A group of rural elected officials signed onto a letter calling for lawmakers to "find the courage to meet the people at the Capitol" or delay the session.

"Utahns are suffering from digital burnout and crave face-to-face interaction," states the letter posted on Facebook by Iron County Commissioner Paul Cozzens. "We have witnessed the measures people will take when they feel ignored."

The letter urged lawmakers to "listen with courage rather than create walls of fear ... Without real interaction and citizen involvement beyond lobbyists, resentment will continue to foment. Digital meetings may suffice for planning, logistics and education, but a sterile electronic environment is no place to connect with those who are hurting. If the Legislature believes these decisions to conduct Utahns' business in a digital vacuum is adequate why would the legislature meet in person?"

Legislative leaders credited staff for their efforts to make participating in the session — remotely or otherwise — easier than ever before, and said that they'll re-open the Capitol when it's deemed safe to do so.

Wilson called 2020 a "tragic year for the world, for our country and for our state," referencing over 1,000 Utah families, including some from the Legislature, who have "lost loved ones." Wilson also said even as the Legislature convened, a "dear friend" was hospitalized due to COVID-19. He didn't identify the person.

Despite "daunting challenges," Wilson said this year's session is "a time of great opportunity for our state."

"We, as a Legislature, have a tremendous responsibility to create an environment in which Utahns have the freedom and ability to improve their lives and for succeeding generations to partake in prosperity," he said. "We are going to work harder and smarter than we've ever worked; and we are going to come together like never before because the moment demands nothing less."

"We need to learn from the lessons of the past — to avoid the pitfalls of those who have gone before us," Adams, R-Layton, said. "We will lose what makes our country the beacon of hope, the American dream, everything that is so precious to us if we continue down this path. Our very freedoms are at stake."

He called for people "to practice their constitutional rights in a peaceful and orderly manner" and said legislators "will not tolerate violence and civil disorder."

"Our work this year is just beginning. We have a long road ahead of us and many things have changed, including the annual general session. Instead of gathering with all our family and friends, we have limited family members and senators. Some senators are here in the Capitol and some senators are joining virtually. But we are all convening, and we are ready to do the people's business and represent our constituents. What a difference a pandemic makes."

Adams emphasized the importance of vaccinating older adults to reinvigorate the economy and save lives.

"If we vaccinate those 65 and older, we eliminate 77% of fatalities by focusing on just 10% of our population. Vaccinating those 65 and older is the most significant step we can take to protect lives and livelihoods. If we do that, we can open up the parts of our economy that are still struggling, including our entertainment facilities, convention centers and hospitality services," Adams said.

In the midst of all this tragedy, we have seen Utahns facing adversity with determination, overcoming challenges with innovation, and lifting others with compassion

During their speeches, both Wilson and Adams said governmental balance of power amid a prolonged emergency will be a priority.

"As a legislative body, we made some important and timely adjustments to allow us to function during the pandemic." Wilson said. "However, as time wore on, it became clear we need an exhaustive effort to review and update our plans and procedures for navigating an ongoing crisis like a pandemic."

Wilson called on his fellow representatives to "provide clear direction on what constitutes an emergency, what authority that triggers and how long it should last. No emergency should usurp the power of the people, nor should it dismiss the need for transparency and accountability for actions taken in times of crisis."

Adams said policy "should not be created by the executive branch or judges but should be a deliberative process reserved for a larger, more diverse group of elected officials. Our Founding Fathers got it right — only a legislative-like group could create the most significant policy document in our country's history."

Adams told reporters later Tuesday the issue of executive emergency powers was one that lawmakers decided to take up more fully in a general session, and is an issue that will be headed by Senate Majority Evan Vickers, R-Cedar City, to avoid multiple different legislators "coming up with their own ideas" in a separate, uncoordinated fashion, Adams said.

Vickers said lawmakers are still working to identify some changes and are hoping to have a draft ready to present to working groups, legislative leadership and then to Gov. Spencer Cox and Lt. Gov. Deidre Henderson for their input.

"It's a bill that's moving through the process, and then when we're ready to take it to (the) public we want to make sure that there's ample time for people to review it," Vickers said. "Certainly not a bill we're going to rush through."

Some other bills dealing with executive powers, however, are likely to surface, Vickers added. "That's the legislative process. Any legislator can open a bill file."

During their speeches, Wilson and Adams highlighted a variety of legislative priorities for this session, including education funding, reviewing business regulations, infrastructure investment, mental health programs and tax relief.

"The House is leading an effort to change that," he said. "We are working with the state health department to help families of uninsured children access available resources for coverage."

Both Wilson and Adams also devoted time in their speeches to mental health initiatives.

"Our state's health depends on more than just physical well-being. Today, we have a clearer understanding of the importance of long-stigmatized mental health issues and how to treat mental illness without hiding it away," he said. "The time has come to invest in a comprehensive approach to address mental health challenges."

Adams said he will focus on "reinvigorating our mental health efforts." 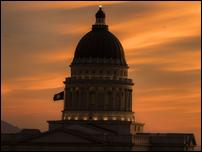 "One of the core principles that makes our ability, as a Legislature, to have good outcomes, is having a lot of involvement from stakeholders," said Utah House Speaker Brad Wilson, R-Kaysville, in a Q&A event Thursday to preview the 2021 legislative session.

"Throughout the pandemic, mental health needs have increased. Davis County's receiving center for mental health has experienced amazing results. This program and others like it need to be expanded. We cannot ignore this growing concern. Utah should and will create models the country can use to help address this important issue," Adams said.

Funding for infrastructure and education, and protecting the state's open spaces through trail and park capacity projects, will be other major focuses, Adams said.

"Utah faced some incredible challenges in 2020, and we met adversity head-on. The great people of Utah deserve all the credit. Their fortitude enabled us to emerge from 2020 stronger, as individuals and as a state. Nothing good just happens," Adams said.

"Now, we have a lot of work ahead of us in the next 44 days. I urge you to be civil and respectful, even at times when we disagree. Let us set the standard for 2021 – our comeback year – for health, for jobs, for civility and to unite as a nation once again," he said.

Wilson, concluding his remarks, said lawmakers will "face the challenges" and "seize the opportunity."

"Let's think broadly, debate vigorously," he said, "and do the hard work."