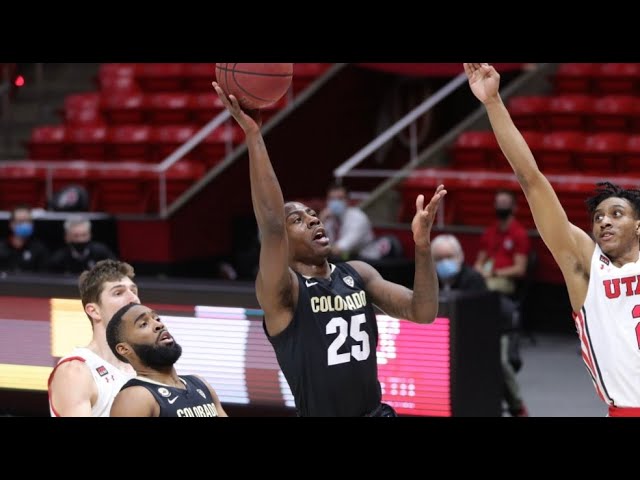 SALT LAKE CITY — For the second time in three days, Utah blew a 10-point halftime lead to fall to its opponent in the closing minutes of the game.

But unlike the turnover problem the Utes faced in their second-half loss to then-No. 17 Oregon Saturday, Utah couldn't get into an offensive rhythm out of the break on Monday against Colorado in a 65-58 loss at the Huntsman Center. It's the team's fourth straight loss on the season.

Colorado's D'Shawn Schwartz led the charge for the Buffaloes in the second half and scored three straight buckets to start the scoring onslaught. He finished the half scoring 12 points after having only 3 points in the first half. He added 15 rebounds to help Colorado outrebound Utah 49-31 on the night, including an 11-rebound differential (15-4) on offensive boards.

"I thought the other night was turnovers and tonight was rebounding," Utah head coach Larry Krystkowiak said. "We got pounded on the glass; we got them to miss."

Jabari Walker added 15 points and 10 rebounds for the Buffaloes, including a pair of late free throws to keep Utah from spoiling Colorado's late lead. Conversely for Utah, missed free throws became a real detriment to a late-game comeback as the team went 2-of-11, including 0-of-7 in the second half, from the charity stripe.

"We were 0-for-7 in the second half at the free-throw line, so different story, same result," Krystkowiak said. "I don't know exactly what the good Lord has in mind for us here with already a difficult year."

Timmy Allen led Utah with 19 points, five rebounds and four assists in the loss, and Plummer added 12 points and two rebounds in his second game coming off the bench for the Utes.

Late in the first half, Utah relied on Allen to oversee the offense with Rylan Jones unable to run the point due to two early fouls against a difficult-to-contain McKinley Wright IV. The shift in offense seemed to work as Utah overcame a 2-point deficit to reel off a 13-2 run and take an 11-point lead before Colorado's Maddox Daniels broke the dry spell with a 3-pointer.

"It's actually been one of the bright spots for us — offensive efficiency — with the ball in his hands; it really gives us a good chance — we've just got to make some of the shots."

Utah carried a 10-point lead into the break behind a strong game plan to attack the rim, for which Colorado had few answers. The Utes scored 26 points to Colorado's 8 in the paint to overwhelm the Buffaloes. But the tide turned as Colorado closed the gap in the second half to score 22 points in the paint.

A poor shooting performance doomed Colorado's ability to keep the game close in the first half. The Buffaloes managed only 27 points on 27% shooting from the field on 33 attempts and struggled to convert easy shots under the basket. The team's saving grace was its ability to shoot 4-for-10 from behind the arc to keep Utah from running away with the game.

Utah will continue with its third of four games in seven days Thursday when it welcomes Stanford to the Huntsman Center. The game will tipoff at 3 p.m. MST and will be broadcast on ESPNU.