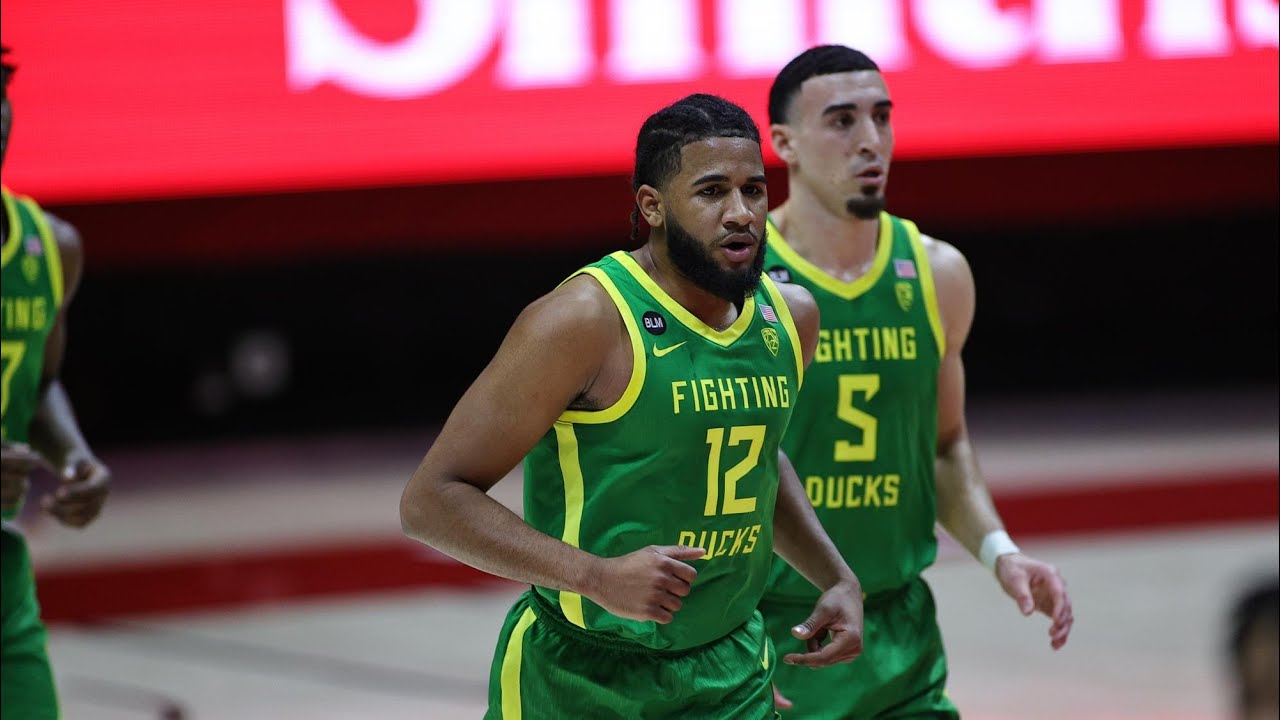 No. 17 Ducks use stingy second-half defense to close out Runnin' Utes 79-73 in Salt Lake City

SALT LAKE CITY — A four-minute stretch to open up the second half was all it took for the visiting No. 17 Oregon Ducks to capitalize.

After controlling a 10-point advantage at halftime, Utah committed three consecutive turnovers out of the break and the Ducks quickly went to work to the tune of a 9-2 run. Utah was forced to play catch-up for the remainder of the game as the Ducks outpaced the Utes 46-30 in the second half to come away with a 79-73 win to split their road trip.

"The ball was moving and we were clicking, and we were making open shots," Utah's Timmy Allen said. "They picked their pressure up in the second half — our first four minutes of the second half were not great. I think they just took us out of the rhythm a little bit. ... For the most part, I think we handled the pressure pretty well, but too many turnovers down the stretch."

Those turnovers, of which Utah (4-4, 1-3) finished with 18 in the game, led to 25 points on the other end for Oregon (9-2, 4-1) — a significant chunk of Oregon's second-half comeback. The Ducks only had 5 points in the first half off of Utah's six turnovers, but they sped Utah up and forced the team into uncomfortable situations.

"The situation I thought tonight was, it's the 25 points on our turnovers — and a lot of that started in that stretch in the second half. They really picked up the pressure," Utah head coach Larry Krystkowiak said.

"We got sped up, turned the ball over, and the 25 points that they got off of our turnovers are oftentimes undefendable," he added. "But when we're in the half court, I thought we had a really great effort from our guys. We fought, scratched and shared the basketball."

Beyond the turnovers, Utah did almost everything right — if you can consider that in a loss. The team opened up with an aggressive style of play, they spaced the floor out to give guys open looks, the passing was crisp and clean, and the shots were falling. Utah finished the first half with 13 assists on 18 made baskets and looked to be in charge.

But the shot didn't fall in the second half.

Utah finished with 20 assists. Krystkowiak said the team had a "mindset of sharing the ball" and not much changed in the second half, other than the shots didn't fall.

"I thought we made shots, made extra passes, got to the rim. And not a whole lot changed, really, once we got through that three-, four-minute segment to start the second half," he said. "We made the same passes, but it's not an assist if the ball doesn't go in. So I think we could have had in the mid 20s, even more perhaps if we knock down some shots. But it's a physical game."

Mikael Jantunen, who finished with a career high 20 points on 8-of-14 shooting, said the biggest thing for the team's early success was everyone was playing "free" and "playing together."

"We were playing, I would use the word 'free' — we played happy, like we enjoyed playing with each other, and that was kind of the key for us," he said. "After that we started making our shots. And when somebody passes to you, you want to pass to them, so it kind of spreads and everybody was sharing the ball and we got good looks and made our shots, and I think that was the biggest key in the first half for us. That's what we need to continue to do."

Utah changed its starting lineup Saturday night and inserted Pelle Larsson and Riley Battin in place of Alfonso Plummer and Branden Carlson to go with a more defensive-minded lineup, according to Krystkowiak. And whether by coincidence or a product of the change, Utah found a spark it hasn't featured much during the season.

Allen used a strong first half where he scored 17 points on 8-of-10 shooting to give Utah a double-digit advantage at the break. But the junior forward cooled down in the second half to finish with 23 points and five rebounds as the team's leading scorer. Larsson added an additional 15 points, five rebounds and five assists before fouling out of the game.

Oregon, who entered the game off its first conference loss of the season to Colorado Thursday, was led in scoring by Chris Duarte; he finished with 25 points on 9-of-13 shooting from the field. Eric Williams Jr. added 19 points and six rebounds, and LJ Figueroa added 15 points and three rebounds in the win.

The Ducks built onto their early second-half momentum to outpace Utah in the half and build up their largest lead of the game — 6 points — with just under four minutes left to play in regulation. All Utah had left to give at the end was fouling Oregon in an effort to cut into the lead, but Oregon finished 81% from the charity stripe to close out the game.

Utah returns to action Monday at 4 p.m. MST against Colorado in the second of four games in a seven-day period. The game will be played at the Huntsman Center and will be broadcast on the Pac-12 Networks.