SALT LAKE CITY — Although Utah lawmakers are seeking to eliminate hurdles with proposed legislation to allow any doctor to recommend medical marijuana, some experts argue it's only a temporary fix to a lasting problem.

Under the previous law, which expired at the end of 2019, physicians could recommend the use of cannabis without registering as a qualified medical provider (QMP). Lawmakers want to continue this provision, allowing doctors to continue without the online training.

By doing so, lawmakers say they believe it will eliminate one of the biggest hurdles with the current program.

"If they don't have a physician in their area, especially in a rural area, they'd have to go to a physician somewhere else in the state," said Senator Evan Vickers (R-District 28), who is familiar with the legislation. "Some of those physicians who have become QMPs are charging a pretty high fee."

However, some medical experts say it can be dangerous to allow doctors to recommend medical marijuana to any patient without understanding the effects.

Lawmakers plan to present the bill during the 2021 general session, which would allow any doctor to recommend medical marijuana to a maximum of 15 patients.

Although the program has been in place since March 2019, Vickers said several physicians haven't registered as QMPs. This could be for a number of reasons, he said, such as the extra time commitment or the monetary fee.

Others may just not want to do it, according to the state senator.

This causes disparities across the state, particularly in rural areas, because those who are registered QMPs may charge more money while not accepting insurance. 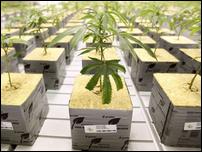 Legislators are again eyeing changes to Utah's medical marijuana law, including enabling any doctor to recommend the medication to up to 15 patients.

Instead, Vickers said he hopes the program will encourage more physicians to "get their feet wet" and undergo the formal online training.

"(It would) expose them to the cannabis program and see if they have the desire to go farther than that," he said.

Some medical experts say education on cannabis is crucial

However, some medical experts say omitting the required qualifications can lead to more issues as physicians recommend — or don't recommend — cannabis to patients without fully understanding the drug.

Dr. Meredith Fisher-Corn, a board-certified physician specializing in anesthesiology and pain medicine, created one of the courses Utah physicians can complete to become a QMP. The course only takes four hours — but without it, she said it could negatively impact the treatment.

"As a physician, I completely understand how many clinicians would view registering with the state and with the program a 'hurdle,'" Fisher-Corn said. "However, I do not see education as a hurdle. It's a four-hour course, and most doctors have not received any education on medical cannabis or the endocannabinoid system in their medical school training."

Omitting the training isn't the solution, according to Fisher-Corn. Instead, doctors should take regular courses studying the medical literature on cannabis.

"They need to have the basic understanding of what medical cannabis is and what the endocannabinoid system is in order to effectively and safely treat their patients," she said.

Lawmakers argue education is there as doctors work with experts

On the other hand, lawmakers say the new program won't be an issue, as physicians work closely with cannabis pharmacists who are experts in the field.

That way, physicians can consult with experts to know whether to recommend medical marijuana to their patients. It would also allow doctors to learn more about the drug.

"We've quickly learned that the cannabis pharmacists have become very much an expert in the area," Sen. Vickers said. "So that cannabis pharmacist teaming with the physician can overcome that, at least in those few patients we're talking about."