'Celebrate our history and our present and our future': Utah marks 125 years of statehood

SALT LAKE CITY — Utah is celebrating its 125th birthday with a commemorative broadcast and statewide firework displays in every county Monday evening.

Statehood Day, or Jan. 4, normally goes unnoticed as the major holiday celebrations have wrapped up and people are returning to their normal day-to-day activities.

The Utah Department of Heritage and Arts was tasked by the Legislature to commemorate Utah's 125th anniversary of statehood, but faced challenges with the COVID-19 pandemic. Lawmakers allocated $1 million out of the 2020 CARES Act for hiring local celebrities, performing artists, and studio or sound techs, and the money had to be spent by the end of the year.

Josh Loftin, spokesman for the heritage department, said social distancing guidelines led to the "Thrive125" anniversary celebration to be prerecorded in various parts of the state and set to air Monday night at 6:30 p.m. on all local television stations, with fireworks occurring at 7:30 p.m. in many cities across Utah.

"It's a dose of showing we can come together as a people and celebrate our history and our present and our future, even if it's only for an hour," he said. "I think we could all use something uplifting and optimistic; which is what this program and the fireworks will be,"

Loftin said the creators of Thrive125 worked just as hard for the 2021 statehood celebration on being fair to history as they previously did with the 2019 celebration of Spike150 and the transcontinental railroad. The goal was to recognize the state's good history, such as women's suffrage, but not to ignore or downplay the negative impacts on Native Americans, Asians, African Americans, Irish settlers, and other immigrants that made up the state's population for more than 125 years.

"When we did (the Spike150) celebration, we made sure we really highlighted those voices and not to whitewash it; to really be honest about what (the celebration) was about," Loftin said. 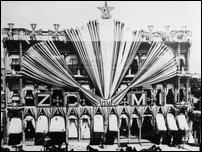 State of Utah at 125: 6 facts about Utah statehood you may not have known — or forgotten

Happy birthday, Utah state! Monday marks the 125th anniversary of when Utah became the 45th state of the U.S. In honor of the holiday, here's a look back at how it came together.

Thrive125 is set up to not only celebrate Utah's 125th anniversary, but to educate the general public on Utah's almost 50-year journey to statehood. According to its website, the goal is "to honestly discuss our relationships to each other, to the nation as a whole and to the land itself."

The Department of Heritage and Arts is hoping to encourage public schools to use newly created resources, such as lesson plans on Utah's Immigrants, original Native American history and sovereignty, as well as Utah's ties to polygamy that slowed efforts to become a state. It has also provided a 16-minute video on YouTube called "Becoming Utah: A People's Journey" as an all-in-one history lesson that is meant to be entertaining and relevant.

Loftin said the major roadblock to publicizing these events was in making the history "engaging" while currently being confined to a virtual platform.

The Thrive125 website lists other events about the state's history throughout 2021.

"This statehood celebration is an opportunity for Utahns to start their new year with unity and hope. This program celebrates the arts and their importance to the state's economy and quality of life, and encourages each of us to continue to support the cultural community as our economy recovers," new Gov. Spencer Cox said in a news release.