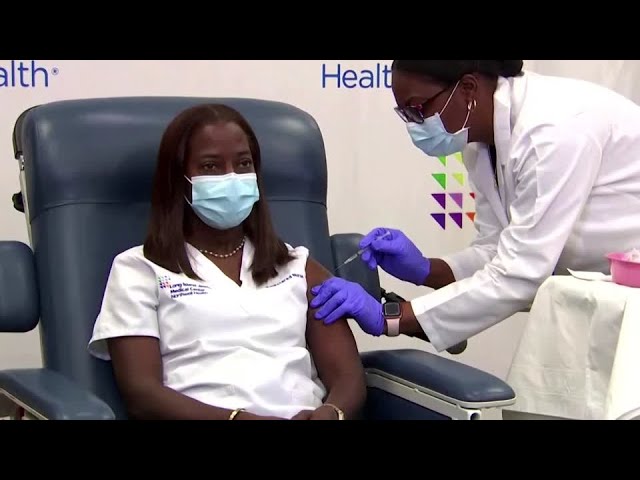 NEW YORK (Reuters) — A New York City intensive care unit nurse on Monday became the first person in the United States to receive a coronavirus vaccine, calling it a sign that "healing is coming," as the nation's COVID-19 death toll crossed a staggering 300,000 lives lost.

Sandra Lindsay, who has treated some of the sickest COVID-19 patients for months, was inoculated at Long Island Jewish Medical Center in the New York City borough of Queens, an early epicenter of the country's coronavirus outbreak, receiving applause on a livestream with New York Governor Andrew Cuomo.

"It didn't feel any different from taking any other vaccine," Lindsay said. "I feel hopeful today, relieved. I feel like healing is coming. I hope this marks the beginning of the end of a very painful time in our history.

"I want to instill public confidence that the vaccine is safe," she added.

"This is what heroes look like," Cuomo wrote in the caption of a photo of Lindsay, wearing a mask and staring resolutely ahead, that he posted on Twitter.

Similar scenes played out at select hospitals in other cities, including Los Angeles, where California Governor Gavin Newsom applauded as a Kaiser Permanente emergency room nurse rolled up her sleeve for a needle jab on live television.

"It's been an incredible morning. It's historic," said Dr. Leonardo Seoane after he received a shot at Ochsner Medical Center in New Orleans, where he has led some of the clinical trials that found the vaccine 95% effective in preventing COVID-19 illness.

The made-for-TV events — the first U.S. coronavirus immunizations outside of clinical trials — were part of a broad campaign by public health authorities and political leaders to reassure Americans of the vaccine's safety as they launched a national immunization program of unprecedented scope.

By day's end on Monday, vaccine shipments had made it to nearly all of the 145 U.S. distribution sites pre-selected to receive the initial batch of doses, with a number of major hospital systems launching immunizations immediately.

"This is a race against time," said Greg Adams, chairman and CEO of the Kaiser Foundation Health Plan Inc.

U.S. officials said no major hiccups were reported. U.S. Army General Gustave Perna said on a call with reporters that severe storms forecast this week could potentially hamper rounds of shipments to another 491 locations.

'A proud day for science': 1st COVID-19 vaccine doses arrive in Utah to be administered this week

The vaccine's arrival provided hope as the country passed 300,000 lives lost. Mounting COVID-19 hospitalizations — a record 109,000 patients reported on Monday alone — have strained healthcare systems to the breaking point, and more than 16 million U.S. coronavirus cases have been recorded to date.

Over the past seven days, the United States has averaged 2,462 deaths a day, the highest since the pandemic started, according to a Reuters count.

The process of shipping the first 2.9 million doses of vaccine began on Sunday, 11 months after the United States documented its first case of COVID-19.

The initial doses have been earmarked for healthcare professionals and nursing home residents, with essential workers, elderly people and individuals with chronic health conditions next in line.

As part of a national security protocol aimed at ensuring continuity of government in the event of an emergency, senior leaders in the executive branch, Congress and judiciary were also being offered early vaccines.

It will take months before vaccines become widely available to the public at large, and health officials have warned Americans to remain diligent about social distancing and the wearing of face masks to curb virus transmissions.

The first U.S. vaccine shipments departed Pfizer's facility in Kalamazoo, Michigan, packed into trucks with dry-ice to maintain the cargo at its required sub-Arctic temperature. Driven to air fields in Lansing and Grand Rapids, the shipments were then flown by UPS and FedEx planes to cargo hubs in Louisville, Kentucky, and Memphis, Tennessee.

From there, they were trucked or flown to the first 145 vaccine-staging areas across the country. Second and third waves were due to go to 491 remaining sites on Tuesday and Wednesday.

"This is the most difficult vaccine rollout in history," U.S. Surgeon General Jerome Adams told Fox News on Monday.

Governors in 26 states and territories were deploying National Guard troops to assist in the operation, the Guard said.

U.S. top infectious disease expert Dr. Anthony Fauci told MSNBC on Monday that Americans with no heightened risk factors could expect to get vaccinated by late March or early April.

"Maybe by the end of late spring," Fauci said, "so that by the time we get into the fall, we can start approaching some degree of relief."

That would include vaccines from both Pfizer and Moderna. An outside U.S. Food and Drug Administration advisory panel is scheduled to review the Moderna vaccine on Thursday, with emergency use expected to be granted shortly thereafter.