Could voting with your phone be the way of the future? Some Utah lawmakers think yes; others disagree

SALT LAKE CITY — After navigating the world as a blind man for nearly 17 years, independence is everything for Jeff Smith.

"As a blind person, that's the first thing you lose — your independence," he said. "Anything I can do without assistance and someone else is a winner in my life."

So when the Farmington resident heard he could use his smartphone to vote, he was excited and nervous but said it is a "real superior experience and easy."

"It's very reassuring, and it just felt empowering to me to know that I was able to vote on my own and to see that it actually went through," he said.

Smith uses Voatz, a mobile voting app, to participate in elections. Utah County first began using the system in 2019 and has since utilized it in five elections, including the recent presidential election.

Currently, mobile voting is only allowed in the county for military members, disabled residents and residents living overseas — like those serving a mission for The Church of Jesus Christ of Latter-day Saints or those away at college.

Utah County Clerk Amelia Powers Gardner said she hopes to see that change with the system available to all absentee voters and maybe, probably a decade down the road, as an option for any voter. She also hopes to use mobile voting as a contingency plan for emergencies — like in the COVID-19 pandemic or wildfire evacuations, for example.

"Most people carry a cellphone these days," Nimit Sawhney, co-founder and CEO of Voatz, told KSL.com in an email. "Even in a natural disaster, cell service is the first service to be restored in affected areas. Without a mobile option, it's hard to imagine an election resilient to shocks."

The week of the election, Utah County had around 85 people contact the clerk's office saying they had just tested positive for COVID-19 and could not vote in-person. Powers Gardner was able to classify their positive COVID-19 test as a temporary disability and allow them to vote by phone.

You use your phone for pretty much everything, so why not voting, too? Some Utahns could soon get the chance to try out the system thanks to a draft bill sponsored by Rep. Mike Winder, R-West Valley City. The proposal will allow certain municipalities to use mobile voting in local elections. It was approved last month by the Government Operations Interim Committee, and it will likely be discussed more in the 2021 general legislative session.

"A city election is the perfect place to expand the use of these pilots so we can continue to test and improve the technology, so eventually — maybe 10 years down the road — it can be broadly adopted," Powers Gardner told the committee.

With proper testing on a wider base of people, counties will have experience with the system so they are prepared for those emergencies and able to roll it out within 24 hours.

"One of the things that I want people to understand is that this pilot really will take it from a few hundred people who utilize the system each election to a few thousand," Powers Gardner told KSL.com. "I think it would be irresponsible not to test the system in that way, so that we have this option in the future in an emergency." 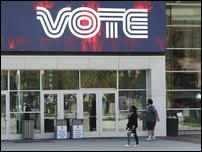 2020 Election: Where Utah's record voter turnout was the best and worst

The 2020 election will go down in history for many reasons, including the record turnout across the U.S.

As for the Voatz system itself, Powers Gardner is confident it's a secure and safe way to vote. The system uses blockchain technology, which is also used for cryptocurrencies. Voatz was recently found to be compliant with U.S. voting systems by an independent Voting System Test Laboratory, Powers Gardner added. To be certified with the Election Assistance Commission, Voatz will need to register with its Testing and Certification program.

"The decentralized nature of blockchain ensures that no one person or entity can affect the integrity of the election," Sawhney explained.

"Any time we bring transparency into this process, I think it improves confidence," she said.

Mobile voting can help voters feel confident in the process since they're able to track their vote and see if it was counted — similar to mail-in ballots — and know their vote made it where it needed to be. Although by phone, the app works the same as standard voting methods; the vote is securely sent to the clerk's office where it is then printed and tabulated. The app does not count votes; all mobile votes will be tallied and sent through the same machines any other ballot goes through when being counted.

Others around the state see the benefits of making voting more accessible and resilient, but Overstock.com CEO Jonathan Johnson believes mobile voting technology can also increase voter participation and give people more time to become educated on the issues.

"In that sense, it's a lot like mail-in voting, but it also makes it easier to vote," he said. "You can wait until the last moment and you're fully educated."

Voatz is one of many current mobile voting companies, and Johnson believes embracing the new voting method won't be a "one company solution." However, not everyone sees the benefits of mobile voting and instead feel it leaves elections more vulnerable to hacking.

State Rep. Suzanne Harrison, D-Draper, said during the committee hearing that she sees security concerns related to Voatz specifically, citing an MIT research paper and criticism from the Department of Homeland Security.

"My concern is, we should be embracing things that are most secure and addressing those legitimate areas that are security risks and cyberattack risks by continuing to embrace the gold standard of paper ballot."

Powers Gardner countered that the app still generates a paper ballot, and it's simply a "mobile ballot marking device." The system assumes no more risk than any system currently used to vote in Utah, she added. To be certified with the Election Assistance Commission, Voatz would need to register with its Testing and Certification program.

As for the research papers citing security concerns, Powers Gardner said that claim has to be put into perspective.

"The MIT researchers were a bunch of college students who really have no clue how we run elections," she told the committee.

One major concern cited in the research was that the voter data, or votes, is given to a third party in order to run the election, Powers Gardner said; however, the state of Utah uses secure networks to send voter data to printers, and it's considered common practice. MIT researchers painted it as unacceptable risk.

There are more credible critiques of the system, Powers Gardner noted. The Department of Homeland Security said the technology wasn't open sourced; however, the system used to tabulate votes in every county except for Salt Lake County garners the same criticism from the department, since it also isn't open sourced.

Voatz is just as secure as the county's other voting methods, like in-person or by mail, she said, noting the app's security meets the required federal standards. The system, according to Sawhney, has been successfully used in 75 elections without incident, including multiple governmental elections and conventions for both the Republican and Democratic parties.

"Security has been our utmost priority since day one, and it begins with how we build our technology," he said. "We follow industry best practices across our corporate and elections infrastructure, including end-to-end encryption and layered security to provide in-depth defense.

"We also hope that there will be movement towards creation of standards for new voting technologies, more industry collaboration in the sector, federal/state funding to support pilot programs and more jurisdictions coming forward to pilot the mobile voting technology in order to enable more access and choice for voters," Sawhney added.

In the proposed Utah pilot, cities can opt into the program; its citizens, too, can opt in to vote but still choose to vote by mail or in person. Winder said it will simply give people more options to vote.

Winder said the pilot could help the Beehive State model better voting techniques for the nation.

"I love the idea that Utah is at the forefront of the nation when it comes to making voting easy for people, making it accessible and embracing the 21st century," Winder said.