She lost her limbs but never lost hope. How Rosalie Parker miraculously recovered after nearly dying 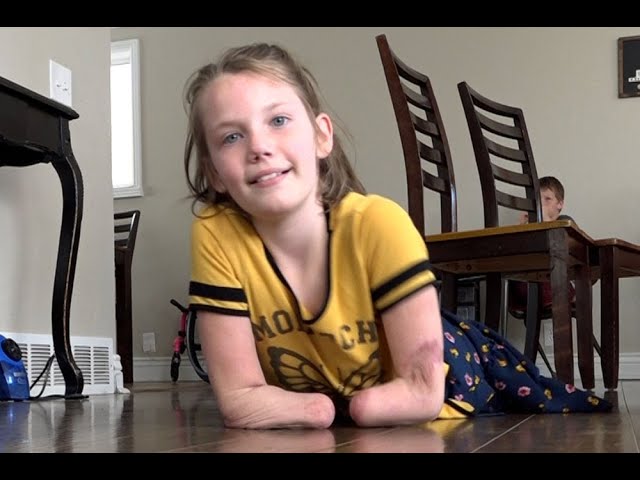 IDAHO FALLS — It is a moment Benjamin and Eileen Parker will never forget.

Their 9-year-old daughter, Rosalie, was clinging to life in her bed at Primary Children's Hospital when three nurses entered the room. One had a guitar while another grabbed a pink plastic container and tapped on it like a drum. They started playing music as the third nurse danced.

The family joined in and Benjamin turned on his phone to videotape the moment.

Months later, Rosalie would leave that hospital bed with half of her body gone and a whole new world awaiting her.

Rosalie is the Parkers' oldest child. She has a 7-year-old brother, Micah, and a 4-year-old sister, Charlotte, according to EastIdahoNews.com.

"The day she was born, she decided to come, and she's had a fiery personality and strong spirit ever since," Benjamin recalls. "She definitely likes things her own way."

Eileen refers to Rosalie as her "mini-mom" because she takes charge and watches over her siblings.

Last December, the Parkers were looking forward to Christmas when a fellow church member asked Benjamin if he could come over for a few minutes. It was Dec. 4, Charlotte's birthday, and Eileen was at a PTO meeting with the two youngest kids. Benjamin picked up Rosalie, went to his friend's house and then made his way home.

"I was turning into the driveway and I didn't see an oncoming car, and we got T-boned in front of our house," Benjamin says.

He had some minor injuries, but Rosalie's rib was fractured and her liver was torn, so she was taken to Eastern Idaho Regional Medical Center.

"All I remember after the car crash is they had to pick me up and put me on this little bed thing, and then they put me in the ambulance," Rosalie says.

The doctors weren't too concerned about Rosalie's injuries and said it wouldn't be too long until she was back to full health.

"Within two to three days, they said we'd be able to go home," Eileen says. "They told us they just had to watch her for a few days, and then we'd be good to go."

The crash happened Wednesday. Rosalie felt fine Thursday but on Friday, she developed a fever, wasn't talking very much and the doctors became concerned. Her situation then took a dramatic turn.

"We were downstairs (at the hospital) because some friends had come to visit. We heard on the intercom a code blue, and they said her room number," Benjamin says. "We raced to the elevator, and someone was there. I said, 'This is an emergency. Our daughter is dying.'"

The Parkers raced to Rosalie's room, where "tons of doctors and staff" were trying to revive Rosalie. The worried parents held each other – crying and praying their daughter would be OK.

Hoping for a miracle

Rosalie was brought back to life and flown to Primary Children's Hospital in Salt Lake City. It was Micah's birthday, so Benjamin stayed home with him in Idaho Falls while Eileen went to Utah.

"As soon as we got there, they immediately started working on her, and she coded a second time. That's when I called Ben and said they weren't sure if she was going to make it through the night and he needed to get up there," Eileen recalls.

Doctors discovered group A streptococcus bacteria had formed in Rosalie's blood and spread throughout her body. The Parkers were told their daughter's organs were shutting down.

"They basically said, 'She's not going to make it, but if she does, you'll be on dialysis for years, she's not going to have any brain function, her kidneys will be shut down and you just don't even know what kind of life she'll have,'" Eileen says.

Benjamin remembers arriving at the hospital and going into his daughter's room. He sat down next to Rosalie's bed and began talking to the nurse.

The next day was agonizing as the Parkers were faced with a sobering choice: If Rosalie's heart stops again, should doctors resuscitate or let her go?

"We came together and said, 'There's no way we could make that decision. We're going to trust in our Father in Heaven. It's in his hands, and we just put all of our faith in the Lord,'" Benjamin says.

The hours seemed like days, but Rosalie slowly began to stabilize. Even though she was asleep, she made subtle movements. Her family was by her side every moment — reading, singing, praying, holding her hand and telling her how much they loved her.

Brittany Badeau was one of Rosalie's ICU nurses. She's seen a lot of kids come and go, but this little girl is someone she won't forget.

"It was touch-and-go for so many hours," Badeau tells EastIdahoNews.com. "There were stretches of days where there was no progress, and in those days, I swear, it was that family. We would just sing and dance and bring light as best we could in the darkest place you could ever imagine as a parent."

That light made a difference because one day, Rosalie woke up. It's one of few moments she remembers.

It was January, one month after the crash, and although Rosalie was stable, sepsis had caused blood to stop flowing to her limbs and doctors would need to amputate.

"My friend had called me and asked what my fears were. I told her, 'I think she's going to lose her arms,'" Eileen recalls. "We were really, really hoping that her feet would make it. They didn't turn as quick as her hands."

Rosalie endured not one, not two, but 17 surgeries and doctors did end up removing her hands, arms and both legs below her knees.

"It is Rosie's ridiculously strong body that got her through that," Badeau says.

That strong body was now half of what it was as Rosalie and her family prepared to begin a new chapter in their lives.

Rosalie returned home to Idaho Falls in March with a wheelchair and eventually a set of prosthetic legs.

"The first couple weeks were pretty overwhelming to us," Eileen says. "I was really scared to come home. At the hospital, you have the nurses, you have your help and you have such a huge support system."

EastIdahoNews.com tagged along with Rosalie on the day her school celebrated Halloween. She dressed as Cinderella — complete with a carriage built on top of her wheelchair.

She began the day in class before going to occupational therapy, where she proudly showed us how she eats, drinks, writes and cuts paper without any hands.

It was then time for physical therapy in the pool, where Rosalie showed no fear.

After swimming, Rosalie headed back to school. Everyone seemed to know and love her.

During recess, she says, she usually takes her wheelchair around the track while other kids play. On this day, she simply enjoyed a piece of candy, and when asked if she needed help opening the wrapper, she politely declined.

After school, Rosalie went home with Micah, Charlotte and Mom. On most days, an aide shows up to help her with homework, reading and crafts before the Parkers eat dinner and settle down for bed.

"Her confidence has just grown huge. She had pretty bad anxiety before the accident, and I don't see it anymore like I did," Eileen says. "She is just more fiery than ever."

Rosalie admits there have been challenges. Going up and down the stairs was the hardest thing to learn and she says she cried a lot – but then got used to it. Now, she can make it up and down in a matter of seconds.

She also worried what other kids might say about her.

"At first when I first went to school, I'm like, 'Mommy, what if people say that your feet are gone and you look weird?'" Rosalie says. "But I noticed a lot of people were being nice to me and my teacher told everybody about me because I was embarrassed to say it in front of the class. Now I'm not that embarrassed anymore."

Eileen says while their lives are completely different than a year ago, things are actually easier now for her family.

Rosalie, now 10, is already on her second pair of prosthetic legs and she'll likely go through two to four pairs a year until she stops growing. Prosthetic arms could come later in life.

There are memories on the Parkers' living room wall of her last handprint before the amputations, but if you ask Rosalie if there's anything she misses about her hands and feet, she'll take 15 seconds to think and come up with this answer.

"I only miss like, um, nothing," she says with a smile.

Rosalie's story is one full of miracles, according to her family, and they don't dwell much on how such a relatively minor car crash ended up the way it did.

"I thought that I was 100% responsible for this, and over time I've realized Heavenly Father knows what he's doing," Benjamin says. "We believe Rosalie had a choice in the hospital. She could have easily passed away, but I think she heard our voices and her will to live was stronger than anything that the doctors were telling us about her condition."

The Parkers believe Rosalie is here for a purpose, and despite the rough times, they say they wouldn't change a thing.

"I think it's opened our eyes to how much good there is in the world and how wonderful people are," Eileen says.

Benjamin adds, "I think she has a destiny and purpose just like everyone here. I think God is fulfilling a special purpose."

The Parkers received special gifts from an anonymous Secret Santa in 2018 and 2019. You can watch the first surprise here and the second surprise here.