Patrick Kinahan: No need for BYU to add more games this season

SALT LAKE CITY — Only two games, both of which it is expected to be favored, stand between the BYU football team and an undefeated regular season.

Not that athletic director Tom Holmoe or any other BYU administrator is asking for advice, but here it is, anyway: Keep the schedule as is. Don't make any additions.

"I know Tom's on top of it," said coach Kalani Sitake. "If there's an opportunity for (adding a game) to happen, then great. For me, it doesn't really matter what it could do for bowl games and things like that. All I know is we're bowl eligible, so we're going to be able to have another guaranteed opportunity to play with these guys again. But other than that, whatever can happen we'll appreciate. That's our mindset, and if nothing happens, we'll appreciate that and keep working with what we've got."

In this most improbable of seasons, given all the upheaval the coronavirus has caused in every aspect of life, the Cougars have strung together a series of impressive wins that have catapulted them into the national conversation. Every November, going back to the inaugural season as an independent nine seasons, BYU was far off the radar beyond its opponent in a second-tier bowl game.

The storyline is radically different this season, in which the 8-0 Cougars have, at the minimum, deserved to be among the teams considered to make the four-team College Football Playoff. If the Rose or Sugar bowls, the two sites for the semifinals this season, seems far-fetched, BYU at least has a decent shot at the prestigious Cotton or Fiesta bowls.

The only path to either game is to crush North Alabama on Nov. 21 and then follow it up in similar fashion against San Diego State on Dec. 12. In both cases, while it might go against unwritten sportsmanship rules, style points matter.

Win big the next two games and it might lead to the program's best bowl since making its only New Year's Day appearance in the Cotton Bowl in 1997. Anything less could result in another bowl game that nobody cares about beyond only the players and parents.

As it appears now, the Cougars have an excellent chance to finish 10-0 with a national ranking that should be no lower than their current spot of No. 8. Only San Diego State could derail BYU's quest for perfection — yes, we intended to recall the catchphrase that former coach Bronco Mendenhall coined — but the Aztecs lost credibility by losing last week to San Jose State, which played a backup quarterback.

Once the virus destroyed BYU's original schedule, which included six Power Five opponents, Holmoe sought agreements with any available team willing to play this season. Over time he came up with 10 takers, including swapping out Army for Boise State, with the idea of possibly adding games as the season moved along.

As the season progressed, the thought of filling open dates seemed enticing as an attempt to beef up the piecemealed schedule that was woefully short on marquee names. A slew of Group of Five opponents, some of which have no reputation, was not going to open any eyes.

But something happened along the way, reversing the idea that BYU couldn't garner any national attention by feasting on nobodies. Yet here we are, toasting the Cougars as one of the sport's darlings.

No need to ruin a good thing.

Unless BYU can add a reputable P5 program, which doesn't seem likely this deep into the fall with all the COVID restrictions, there's no point in trying to improve its credentials against another low-profile team from the Sun Belt or American Athletic Conference. Let the resume — which includes blowing out Navy, Houston and Boise State — stand on its own accord.

With quarterback Zach Wilson mentioned as a Heisman hopeful, the Cougars are an attractive brand. Best to go 10-0 and see what happens. 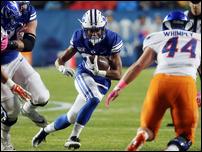 Suffice to say, considering all the strong opinions that drive talking points, media hyperbole often is angled toward the sensational.
×