BYU's Jake Oldroyd has kicked a 70-yard field goal. But 10-yard 'Chip 9' may play more pivotal role for No. 12 Cougars 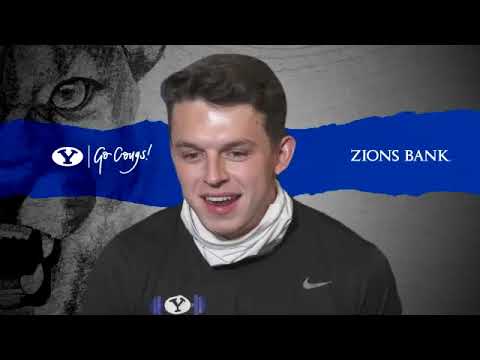 PROVO — Jake Olroyd measured the distance in his mind, looked far down the field, and checked the uprights.

He then backed up into his usual stance and let the kick fly.

The 70-yard field goal was good — in the Cougars' indoor practice facility a few weeks ago.

"I don't see myself hitting a field goal beyond 60 yards," he quickly added this week when asked about his career-long. "Being able to hit a ball from that far just helps me get more height on shorter field goals.

"I'm hoping it gives me more consistency on those shorter kicks, though."

Oldroyd is back at the Cougars' starting placekicker this year, a sophomore with a two-year break to serve as a missionary for The Church of Jesus Christ of Latter-day Saints. And while he probably won't be asked to boot a 70-yard field goal, his role on this year's team has been just as important as the top-10 offense and defense during BYU's best start since 2008.

No. 12 BYU (5-0) hosts Texas State this Saturday, eight days after coming from behind to beat Houston 43-26 in the biggest test of the season to date.

And while Zach Wilson received plenty of due credit for his 400-yard passing day and Dax Milne shared the spotlight with three receiving touchdowns, Oldroyd's contribution was just as crucial.

He wasn't called on to boot a 70-yarder against the Cougars. But he was tasked with kicking a 10-yard hop for an onside kick as BYU rallied to score the final 29 points of the game and held Houston to just 8 yards of offense in the fourth quarter.

"That's something I've been working on for a long time," Oldroyd said. "I've done similar things in high school, and we've been working on it and waiting for the right time to use it. I was anxious; it was ready to go for this last week, so I was excited for the opportunity to pull it out."

Oldroyd lined up in his usual kickoff position, and — aided by his soccer background — dragged out his usual run-up before squib-kicking the ball that bounced in front of Houston's first line of the kick return formation. That's where Talmage Gunther collected the ball untouched, easily corralling the unexpected kick and downing it to give the possession back to Wilson and the offense.

"All the credit to Talmage, who came up and made the catch in the end," Oldroyd said. "It feels amazing. But all the credit goes to my guys on kickoff, who had the faith in me to put down that kickoff and make the right play."

Plenty of credit goes to the kicker, as well. Just a week after missing the Cougars' 27-20 win over UTSA to a back injury, the 6-foot-1, 195-pound Oldroyd added to his storied career that includes a career-long-tying 54-yard field goal that he scored earlier this season against Troy.

Oldroyd first approached special teams coordinator Ed Lamb with the kick over the summer, and the Cougars put it into the playbook. The kick was then added to the playbook leading up to the Houston game, when coaches thought there might come a time the visitors could need it.

"We always have a kickoff huddle, and Isaiah Kaufusi came into the huddle and told the guys, 'Don't look at it,'" Lamb recalled during his Coordinators' Corner coaches show. "It's just Jake and Talmage. Everybody else needs to head down the field, and sell the coverage.

"That's something that's been executed over and over in practice."

The Cougars' win over Houston wasn't perfect, but it kept the unbeaten start alive. And there were some things the visiting Cougars learned — both good and bad — from the win.

For starters, it further convinced BYU head coach Kalani Sitake of the need to be smartly aggressive — including on special teams.

"There are some things that I think could really help us to have some success as a team, in all three phases," he said. "It's going to be based around us being aggressive, and establishing our identity as a team."

The kick — called Chip 9 — was the latest big play from a kicker who introduced himself with a game-winning field goal in his first collegiate game as a freshman, leading BYU to a win over Arizona in Sitake's first game as a head coach.

Since then, Oldroyd has been on a roller coaster ride with the Cougars, filled with highs and lows. At times, he's kicked BYU out of the most difficult situations with his ever-reliable pitching wedge with green cleats. Other times, he's been unable to see the field — like he did a week ago in a win over UT San Antonio, when Oldroyd was out with a back injury he suffered in practice.

The onside kick against Houston isn't the only special kick he has in his bag of tricks, though. He declined to elaborate on the rest — but said they'll come around on a need-to-see basis.

"I won't give away the rest of it," Oldroyd said, "but I can do a lot of other things in the future. Maybe in the future, we'll pull them out."