SALT LAKE CITY — Utah lawmakers took a first step Tuesday toward setting statewide standards for police dog programs, a move that comes amid a criminal investigation of several Salt Lake police K-9 handlers whose police dogs were allegedly ordered to bite suspects even though they appeared to be complying.

The legislative law enforcement panel voted unanimously to consider such a measure, but not before one lawmaker suggested that Utahns should simply stay home if they don't want a police dog to attack them.

"We want to be sure that they're not premature in their biting, but I don't have a lot of sympathy," said Sen. Don Ipson, R-St. George. "We don't want to harm the public, but if they don't want to get bit, stay home."

The statement drew swift criticism from the left-leaning Alliance for a Better Utah, which called Ipson's comment a "terrible statement in support of police violence."

"As a lawmaker, his job is to set policy with the safety and security of Utahns in mind," Lauren Simpson, the group's policy director, said in a statement. "Suggesting that people should just 'stay home' if they don't want to experience police brutality is truly one of the more obscene things to be uttered recently by a sitting lawmaker in Utah."

Simpson called on the Utah Legislature to ensure an end to what Salt Lake City Mayor Erin Mendenhall has called a "pattern of abuse" in apprehensions using police dogs.

K-9 training in Utah's police academy is seen as a national model, and several states have written laws based on the program, Chairman Rep. Lee Perry, R-Perry, told colleagues on the Law Enforcement and Criminal Justice Interim Committee.

But he said some Utah police agencies continue to obtain the training out of state, and Utah hasn't gone so far as to codify best practices.

"So if somebody wanted to fudge the system right now, they could," he said. "We want to say, 'Hey, look, we just need to make sure you're trained.'"

Other states like Minnesota, South Dakota and Washington have codified training requirements for police dogs, with some stipulating that police agencies aren't liable for missteps like mistaken searches, said legislative analyst John Feinauer.

Salt Lake City's program came under scrutiny earlier this year after body camera video showed a Black man, Jeffery Ryans, kneeling in his yard with his hands in the air as an officer deployed a police dog. Attorneys for Ryans, 36, notified the city in a letter of his intent to sue, saying he has long-term injuries including nerve and tendon damage.

Officer Nickolas John Pearce, who is accused of releasing his dog, Tuco, on Ryans, is due in court next week for his first appearance on a criminal charge of aggravated assault, a second-degree felony. His attorneys did not immediately return messages seeking comment Tuesday. 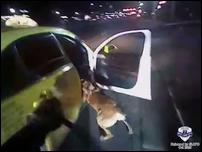 Following an audit of the use of police K-9s to apprehend suspects over the past four years, Salt Lake City police have identified 19 incidents that they believe require a second look.

The city suspended its K-9 apprehension program indefinitely and has placed six officers on administrative leave as prosecutors comb through body camera footage and weigh potential criminal charges for other handlers. In an internal review, the department flagged 19 cases for review by the Salt Lake County District Attorney's Office.

But prosecutors in the office are examining even more cases — 34 total — wherein a K-9 was used in an arrest in Salt Lake City. They are similarly looking at footage from seven other law enforcement agencies in the county.

On Tuesday, Rep. Sandra Hollins said while the dogs are a tool for law enforcers, she believes the panel should examine when the dogs are used and which circumstances make it appropriate to do so.

"For someone to be laying on the ground and complying ... and have a dog go after them, or one of the canines go after them, I think was inappropriate," said Hollins, D-Salt Lake City.

Rep. Mark Strong, cautioned against what he said could be a rush to judgment.

"If we already have established — through research and practice — the best way to handle this, then I don't think it's necessarily rushing to turn around and say, 'If you're going to run this program, you should run it based on evidence and best practices,'" Thatcher said.

Perry, a retired lieutenant with the Utah Highway Patrol, said he has spoken with police chiefs and they support the effort.

Salt Lake police detective Michael Ruff said the agency has gone through Utah's own police academy for K-9 training and is supportive of the legislative effort.

"If there's a way we can improve our department, we'll do that," he said.