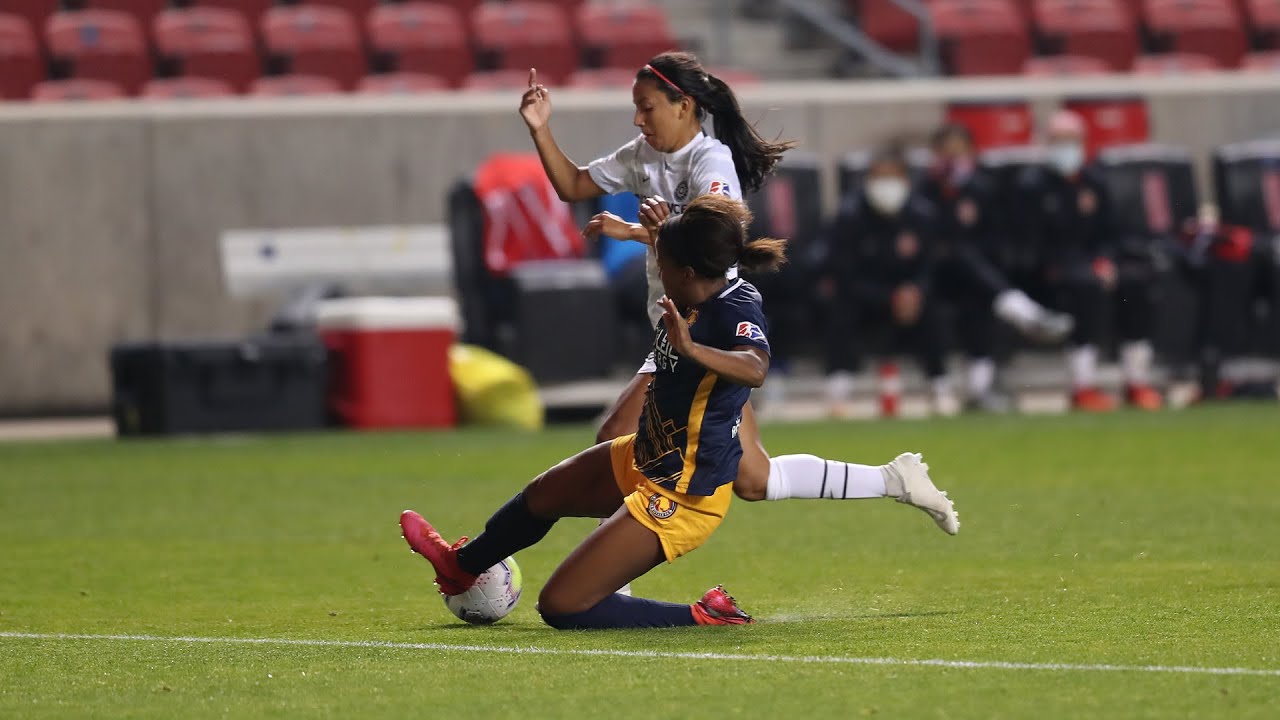 SANDY — Utah Royals FC saved what may be their best performance (so far) for last.

Amy Rodriguez scored a first-half goal, Abby Smith made four saves, and Utah Royals FC played arguably their best match of the NWSL fall series with a 1-1 draw against the Portland Thorns in front of an announced crowd of 1,905 fans Saturday night at Rio Tinto Stadium.

Christine Sinclair scored a 59th-minute goal for the Thorns (2-0-1, 7 points), who trailed at halftime for the first time in the National Women’s Soccer League’s four-game slate of exhibition matches scheduled to finish the disruptive 2020 calendar year.

“I think a lot of tonight can be attributed to attitude,” said Rodriguez, the 38-year-old captain who scored her first goal of the fall series. “We have a fantastic group of players that work hard, that pass the ball around the field and play the field.

“I’m excited to see where this team is going to keep going.”

Playing at home for what is presumed to be the last time in 2020 helped, too.

“I think the message is that we’re going to always play with heart,” Rodriguez said. “Tonight, being the last match of 2020 at home, we wanted to show all our heart.

“We are hanging our heads about walking away with a draw. But at least we can walk away knowing we left it all on the field.”

It’s been a weird year for the Royals, with the club up for sale by owner Dell Loy Hansen and head coach Craig Harrington and assistant Louis Lancaster both on administrative leave.

Exiting the pitch Saturday night with three points would’ve made a lot better. Even without it, the team put it in an effort worthy of pride.

“I think it was our last home game, so you want to defend your home field,” interim manager Amy LePeilbet said. “It was the last one for the fall series, and that adds a little to the effort you put out there.

“But honestly, this group has been working hard every single day. They’re committed, they got after it tonight, and they left it all on the field.”

Rodriguez opened the scoring in the ninth minutes, after the Royals (0-1-2, 2 points) spent the first 10 minutes on constant attack. Vero Boquete served a ball into the box, and Lo’eau LaBonta flicked a shot with her left boot towards the goal mouth that Portland goalkeeper Britt Eckerstrom saved.

But Rodriguez was on the other side of the shot stopper to poke the rebound home and give the hosts a 1-0 advantage, which it held until the second half.

.@AmyRodriguez8 cleans it up and @UtahRoyalsFC are in the lead 🧹

The back line of Katie Bowen, Elizabeth Ball, Taylor Leach and a high-angling Mallory Weber held the Thorns without a shot on goal until the 33rd minute, helping Utah out-shoot the Thorns 6-1 in the first half hour.

That’s when Sinclair connected on a shot with her left foot, but Smith was there to brush it aside — and Lindsey Horan’s attempt at a follow-up drifted wide of the net.

But Smith, the third goalkeeper who has started at least one game in the Royals’ eight matches in 2020, saw a different defensive attitude — a bite, if you will — in her squad’s effort.

Ideally, that character keeps building through Utah’s fall finale at OL Reign — and into the 2021 season, which will follow what has been the strangest season in the NWSL’s seven-year history between the mid-summer Challenge Cup and four-match regional series in the fall.

“We’re trying to build a foundation of our team fighting for each other,” Smith said. “Whenever we’re on the field, we’re going to grind it out.”

“We know that as soon as we step on the field, we’re in game mode,” the former Texas goalkeeper added. “We’re taking each game and each day to make ourselves and our team better. I think we have a great group here, and we’re just trying to build off this year — because obviously 2020 is pretty crazy.”

Sinclair pulled one back just under 15 minutes after halftime, though, connecting with a one-touch equalizer after Smith initially saved a shot that fell to pull level, 1-1.

That brought the Thorns back to life, though Utah out-shot the fall series’ co-leaders 18-14. The Royals also clung held Portland to just five shots on goal — and nearly came away with the go-ahead goal when rookie Tziarra King nearly ripped a shot from the edge of the 18 off the crossbar in the 71st minute.

The Royals close out the fall series Saturday, Oct. 17 in Tacoma, Washington against OL Reign. Kickoff is scheduled for 6 p.m. MT on CBS All Access.