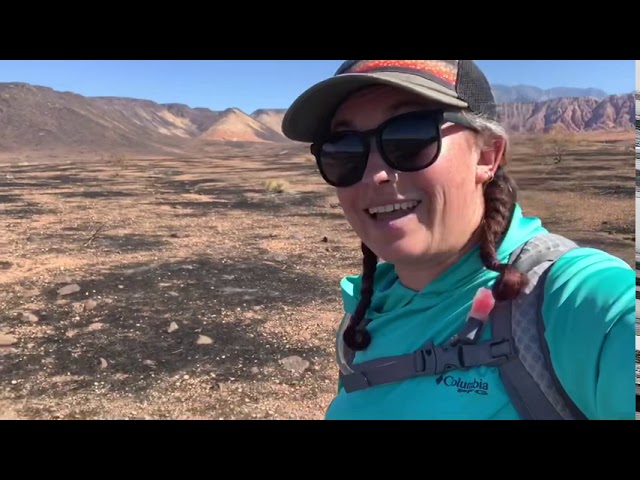 ST. GEORGE (AP) — After the Turkey Farm Road Fire fried nearly 12,000 acres north of St. George, in mid-July, including large swaths of the Red Cliffs National Conservation Area that was set aside in 2009 as habitat for the threatened Mojave desert tortoise, biologists worried what they would find in its wake.

Now, they’re setting out to survey the destruction. On a scorching day in late August, Mike Schijf, a biologist with the Red Cliffs Desert Reserve, led a crew of volunteers out into a landscape left looking like the surface of Mars. These heroes on behalf of half-shells fanned out along a dirt service road and began to march across the scorched earth in search of reptile remains.

First, they found a row of old tires, exposed by the ignition of grasses that had previously concealed them. As they pressed on, their feet sank through the scarred surface into underground spaces left by incinerated roots of desert shrubs. And then they arrived at an abandoned burrow, fringed by fragments of tortoise egg shells.

Where this particular tortoise escaped to or what became of its offspring remains a mystery. They might have managed to stay underground as the blaze passed overhead and then marched their way to freedom after the fire passed. Or they could be entombed within the burrow feet below the surface. But what became increasingly obvious with each crunchy step of survey work, is that a live tortoise lingering in this landscape is in for a hard-knock life.

Desert tortoises rely on native desert shrubs, herbs, cacti and wildflowers to sustain them. But, increasingly, they are surrounded by invasive grasses that lack nutritional content and have spiky awns that can get lodged near the tortoises’ eyes and mouths. After a wildfire, this cheat grass, as it’s called because it out-competes other plants and cheats its way to taking over the landscape, is among the first plants to return. Once it fills in the space between desert shrubs, it serves as quick fire fuel and the habitat is even more likely to burn again.

Ann McLuckie, a wildlife biologist with the Division of Wildlife Resources who was not out with the group surveying the landscape that day, said that much of the 11,994 acres that burned in the Turkey Farm Road Fire had actually previously burned in 2005. That blaze was a disaster for Mojave desert tortoises, consuming about 7,500 acres of the Red Cliffs Desert Reserve and claiming the lives of nearly 700 tortoises.

“The fire in 2005 that re-burned this year, that just makes it much more difficult to restore habitat and restore those native shrubs,” McLuckie said. “Both fires will have impacts on (tortoise) populations. It’s basically a steady decline of native diversity, native shrubs, and basically a slow conversion into an exotic grassland with very little plant diversity and much more readily able to burn in the future.”

As he guided volunteers walking the tortoise transect line from the dirt road to the base of a looming lava slope, Mike Schijf estimated the desert tortoise density in this area of Red Cliffs Desert Reserve before the Turkey Farm Road Fire to be around 17 per square kilometer, a slight rebound from the 15 per square kilometer detected in 2007 but still a far cry from the half-shell heyday of 1998, when biologists found more than 30 tortoises tottering through each kilometer of this terrain.

Today we are grateful for small victories. Found this very old tortoise in the Turkey Farm burn area, with scars from the 2005 fire. We saw his burrow, gave him a drink, watched him munch some of the newly sprouted grass, and wished him luck on his journey.

About halfway through the second transect line, Schijf shouted for the group to stop as he stooped to inspect a burned tortoise shell. Less than six inches across, the outer shell was all that remained of this animal after the fire.

“I would guess this tortoise would probably have been ten to twelve years old when it died, so probably what we would call an immature-aged tortoise,” Schijf said as he measured and photographed the animal for his records.

Mojave desert tortoises don’t reach reproductive maturity until about age 15, so this particular animal would have been on the cusp of being able to help propagate its species before July fireworks blew up that possibility. The Turkey Farm Road Fire was determined to have been human-caused, though the three teenage culprits were never identified.

After a few hours of walking survey lines, Schijf and his group of volunteers broke ranks to see if they could find any live tortoises before calling it a day. Walking up towards some red-rock overhangs, John Mittler and his wife Elaine Daniel, both retired, spotted two tortoises nestled up under a rock ledge in the company of a Great Basin rattlesnake. This was Mittler and Daniel’s second time out doing tortoise surveys, and they also volunteer their time as trail stewards in the reserve, answering questions from hikers and keeping an eye on maintenance needs.

“I think it’s just really important that people are aware that this whole Red Cliffs Desert Reserve was established in order to protect the Mojave desert tortoises,” Mittler said. “We like coming out here and being a part of that.”

Larry Cazier is also a volunteer trail steward in the reserve, and has even taken his commitment to desert tortoises a step further: he attended ‘tortoise school,’ meaning he’s certified to handle this threatened species if necessary to ferry it to safety.

Found a total of 5 tortoises today along Mill Creek, all healthy despite having endured the Turkey Farm Fire a month ago. When we find tortoises out and about, we hydrate them to hopefully help them make it through the heat of the summer!

After documenting the day’s evidence of torched tortoises and marking the new transect edge with pin flags so the next group will know where to start, Team Tortoise heads back to the trucks so that Hall, Snow and Schijf can return to the office to celebrate the final day of Hall’s internship. She may be graduated by the time biologists understand the consequences of the Turkey Farm Road Fire, sparked in an instant.

“It might be two, three, four years before we really know the full impacts of the fire,” Schijf said. “We can come out and find direct mortality and do some calculations on the immediate impacts of the fire, which may end up being significant. But when you look at the landscape around us: the lack of shrub cover that was once here, the lack of food from the fact that we haven’t had rain in a long time, these are going to be some of the more direct impacts that can last for a really long time.”

McLuckie, in her separate surveys of the Turkey Farm Road Fire damage, has also found dead and injured tortoises amid a dry and damaged landscape. After witnessing the aftermath of the 2005 fire in the same area, she expects this blaze to have “devastating impacts on the tortoise population.”

But she’s also seen these tough tortoises survive burned shells, melted skin and other seemingly insurmountable setbacks. She’s spent her career watching this species claw its way through drought and fire towards survival. Now she can only hope its journey to recovery from this latest trial proves, as ever, slow and steady.

Meiners is an Environment Reporter for The Spectrum & Daily News through Report for America, a nonprofit national service program that places journalists in local newsrooms to report on undercovered issues.