Johnson, 44, used “straw” donors to give $50,000 to Lee’s Senate campaign and $20,000 to Reid’s reelection campaign in the 2009-10 election cycle, according to a pending consent judgement filed Monday in U.S. District Court.

The FEC, which filed a civil complaint against Johnson in 2015, fined the St. George businessman $840,000. But recognizing Johnson owes the federal government millions of dollars in connection with other cases and is limited in earning a living, the commission agreed to forgo the penalty.

A federal judge must still sign off on the judgement.

“They wanted us to admit the facts. We wouldn’t do it because a lot of them are not true,” said Karra Porter, an attorney for Johnson. “What we did agree to for the purposes of this one filing was not to challenge the allegations.”

Porter said the FEC went to “all that trouble” of going after Johnson for nothing.

“They got nothing out of it. They didn’t even get an admission of liability or of the facts. They just wanted it gone,” she said.

In a document accompanying the consent judgement, Johnson agreed not to contest a list of FEC allegations describing how he came to make the campaign contributions, several of which involve former Utah Attorney General John Swallow.

According to the document, Swallow solicited Johnson for donations to Lee in 2010 and for former Utah Attorney General Mark Shurtleff, who launched a short-lived campaign for U.S. Senate in 2009. Swallow was Shurtleff’s chief deputy at the time and would be elected attorney general in 2012. He helped raise money for Shurtleff and Lee.

The FEC added Swallow to the complaint against Johnson in 2016, alleging he showed Johnson how to circumvent federal laws that limit individual donations to $2,400.

A federal judge dismissed Swallow from the case two years later after his attorneys successfully argued that federal election law is silent on secondary liability — the practice of holding one party legally responsible for helping another — for the type of campaign finance violations Swallow was alleged to have committed. He was not accused of making the donations himself but of helping Johnson do so.

At the time of the dismissal, Swallow told KSL that he didn’t encourage Johnson to violate federal election laws, nor would he ever him tell him to do that.

The FEC case against Swallow was based largely on statements Johnson made to federal and state agents under immunity during a criminal investigation of Swallow. 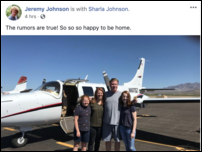 Johnson was to be a key prosecution witness in the public corruption case against Swallow but refused to testify at the trial. A 3rd District Court jury acquitted Swallow, who resigned after a year in office, of all charges.

It is illegal under federal law for a person to donate funds to a federal candidate through another person or allow their name to be used to contribute to a candidate.

When Swallow asked Johnson to contribute to Lee’s campaign, Johnson wanted to know whether he could write a large check or if limits applicable to a previous campaign to which he had contributed applied. Swallow told him that the same rules applied, according to Monday’s court filing.

Swallow did, however, promise Johnson that donating to Lee would help protect his business interests from federal prosecution, according to court documents. Johnson’s businesses included processing tens of millions of dollars in transactions for online poker companies.

“Swallow told Johnson, ‘I’m supporting you, and supporting your processing of poker ... you don’t have to worry about anything on the state level, but if the federal government comes after poker, you wanna head that off and this is how you do it,’” court documents say.

Johnson told friends, family members, employees and business associates, “Hey, would you donate to Mike Lee? I’ll get you the money,” the court filing says. He either paid the straw donors up front or reimbursed them for their contributions.

In one instance, according to the FEC, Johnson’s Triple 7 poker processing company issued a $14,400 check — enough to cover six donations at the legal $2,400 limit each — to a company controlled by a business associate. The company in turn wrote checks to six people who donated the money to Lee. Four of the checks bounced.

Swallow told Johnson about the problem, and Johnson said he would “fix” it immediately. The following day, four new checks were written, one of which bounced a second time.

According to court documents, Johnson used the names of others to give $20,000 to Reid, who was seeking reelection in 2010. Reid was the Senate majority leader for eight years and retired from the Senate in 2017.

Federal regulators were investigating Johnson’s company for charging customers’ credit cards without authorization and other fraudulent practices. The FTC ultimately sued Johnson and the U.S. Attorney’s Office later indicted him on fraud charges.

The Federal Election Commission says Johnson knew the contributions to Reid and Lee were illegal because of donations he had made to Shurtleff’s Senate campaign in 2009.

Johnson offered to write a check to the campaign, but Swallow told him the FEC has limits on the amount that a person could legally give to a federal candidate.

“Swallow and Johnson then discussed the possibility of illicitly contributing additional amounts to Shurtleff’s campaign by giving the funds to straw donors and arranging for those straw donors to pass on the funds to the Shurtleff campaign,” according to Monday’s FEC filing.

The donations to Shurtleff’s campaign are not included in the consent judgement.

Johnson was convicted in 2016 of eight counts of making false statements to a bank in connection with iWorks and sentenced to 87 months in federal prison. He was released to home confinement in May as part of a government effort to combat the coronavirus pandemic.

Also in 2016, a federal court in Nevada entered a $281 million judgement against Johnson but suspended payment in light of his financial circumstances. The IRS has also assessed him millions of dollars in unpaid federal income taxes.