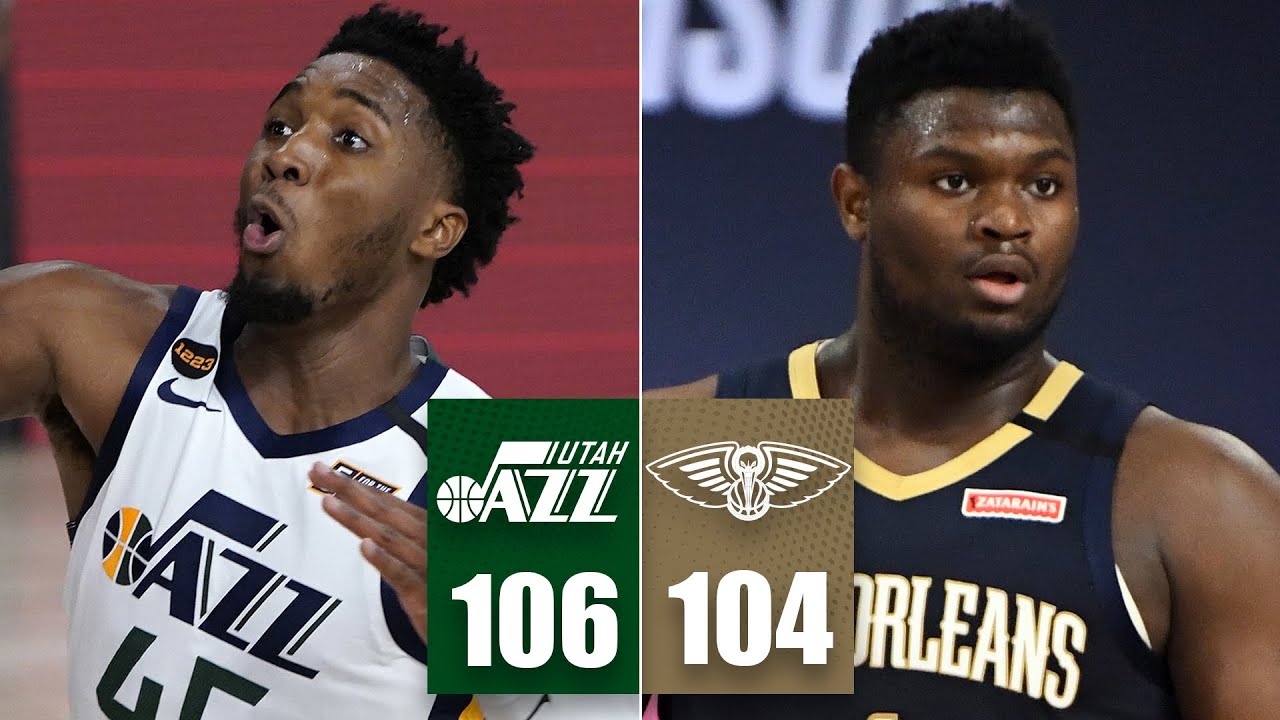 SALT LAKE CITY — This is what we've missed.

Under 10 seconds left, game tied, Donovan Mitchell with the ball. In the first game back since the season was put on hold four months ago by the coronavirus pandemic, the NBA reminded everyone how fun the league can be.

Mitchell made a quick move to get into the paint and was heading to the hoop, but if you thought the young Jazz All-Star was dead set on shooting — think again. Mitchell, who had already scored 8 points in the last four-plus minutes of the quarter, drew the Pelicans defense to him and then dished the ball to Rudy Gobert on the baseline.

New Orleans did the only thing it could — hack the Jazz center before he got to the rim.

Game-winning free throws aren’t as exciting as a game-clinching slam, but they count just the same. Gobert calmly sank two shots from the charity stripe to give the Jazz a 106-104 win over the Pelicans in the first game of the NBA restart on Thursday.

Gobert, the player who first tested positive for the coronavirus, scored the first point of the game — and then the game-winning ones. The All-Star duo of Mitchell and Gobert, whose relationship was questioned throughout the hiatus, combined on the deciding play.

There was something poetic about the NBA’s reopening night.

“Hopefully that kind of stops y'all from talking about it, to be honest with you,” Mitchell said. ”I think at the end of the day, we're basketball players, we're out there make the right plays.”

To call Thursday’s game “great” would be a stretch. There were long periods of porous defense, poorer shooting, and some discombobulated play — things that were expected after a 141-day break. But it didn’t need to be great.

It’s a different world than it was the last time the NBA played a game. The coronavirus pandemic has mercilessly spread through the country, killing tens of thousands and uprooting economies and lives. Social justice issues have been at the forefront with hundreds of protests happening throughout the country and world. On March 11, the night of the league shut down, the national anthem was played — no player kneeled. Before Thursday’s Jazz-Pelicans game, every one of them did.

“It seemed like more than a singular game,” Utah coach Quin Snyder said. “There’s been so much that’s happened since we last played with COVID and all of the people that have been fighting for that and the social justice issues. The anthem was powerful. It’s an honor to be there with coaches and players, so it did feel like something more than a singular game. We feel really blessed and fortunate to be able to be playing right now. (There are) so many people fighting through challenging and difficult times.”

It may have felt larger, but a single game it was. It was the first of eight seeding games for the Jazz, followed by what they hope will be a long playoff run.

The Jazz came out looking like they were going to send a strong message, jumping out to a 19-8 lead in the game’s opening minutes. Gobert had gone one-on-one against old friend Derrick Favors for the game’s first points, Mitchell had hit a pull-up 3 and Mike Conley was getting to the rim with ease.

It was a dream start but then everyone woke up. The Pelicans went on an 18-4 run which eventually led to a 16-point New Orleans' lead in the third quarter.

“I think the team, we’ve been through tough stretches throughout the year, this was just trying to find our groove. We had it to really start the game and after that it kind of went downhill, they started to dictate us, our game on both ends of the floor so we started to just compete,” Mitchell said. “It’s not always going to go your way every night, but as long as you keep fighting and find a way to get back, you’ll be fine.”

And, on Thursday, they were fine. Especially since the starters were superb. Conley had 20 points and four assists, looking more comfortable running the Jazz offense than maybe any other time during the season. Gobert added 14 points and 12 rebounds, Joe Ingles had 13 points and Royce O’Neale finished with 12.

As for Mitchell? Over four months since his last real game, he showed he was still a closer.

The Jazz guard scored 8 of his 20 points in the final 4:06 of the game to finish off Utah’s comeback. He drove in the paint for a floating bank shot, he drew two fouls to get much-needed points and then, on the game’s deciding play, he pulled the Pelicans defense to him, allowing Gobert to be free.

The Jazz needed to make a big comeback for a few reasons. Defensively, they lost New Orleans' JJ Redick repeatedly in transition, allowing him to drop 21 points on mostly wide-open looks. Brandon Ingram tormented them in the first half on his way to a 23-point night and the Jazz bench struggled to defend — and for the most part, to score (not a great combo).

Jordan Clarkson saved the reserves, yet again, with a 23-point night to lead the Jazz. Outside of Clarkson, Utah’s bench was 2 of 10 for four points. Clarkson did most of his damage on the inside, going 7 of 9 from inside the 3-point line and 1 of 8 from outside it. Those long-range shooting struggles were team-wide as the Jazz, missing injured sharpshooter Bojan Bogdanovic, were just a collective 8 of 34 from 3-point range.

The Jazz combated the rough shooting night by scoring 56 points in the paint. Conely and Clarkson repeatedly got inside for layups and Utah's guards found a rolling Gobert for easy looks — just like the play that resulted in the game’s final points.

“They certainly had some synergy on the court,” Snyder said of Gobert and Mitchell. “Just to see them connected like that was really good. We’ve moved on from all that stuff and we’ve been here practicing and working.”

After Thursday, that stuff — the reportedly unsalvagable relationship of their two stars and being the team with Patient Zero — seems to finally be over.

Basketball is back. The play can now dictate the drama.