SALT LAKE CITY — Utah health officials say there was actually a dip in suicide ideation and drug overdoses after the first Utah case of COVID-19 was reported and a stay-at-home directive was issued in March; however, they’re concerned because numbers are once again rising, and there’s been an increase in stresses that may lead to an uptick.

The numbers were provided by experts during an Intermountain Healthcare webinar Tuesday afternoon. There, some of the top experts in the field discussed how the COVID-19 pandemic has affected mental health well-being and spoke further about a new website, LiveOnUtah.org, launched last week to help those dealing with secondary impacts caused by the pandemic.

Lt. Gov. Spencer Cox, who opened the discussion, acknowledged that suicide was a topic Utah lawmakers neglected for a long time but said efforts made by the state have helped “flatten the curve” of the state’s suicide programs. The recent pandemic is now creating a new test for mental health policy.

“We know that mental health matters now more than ever,” he said. “The consequences of COVID-19 are profound. Half of Americans report heightened stress due to worry from the virus and its economic effects.”

Utah emergency service calls about suicidal ideation fell 23.5% and suicide attempts were down 7.5% after the "Stay Safe, Stay Home" directive was issued. That’s compared to the "13 weeks or so" before the order was issued, said Dr. Michael Staley, suicide prevention research coordinator for the Utah Department of Health’s Office of the Medical Examiner. But those numbers are starting to go back up. The number of suicide deaths has remained at about 14 per week, or two every day.

Both prescription and illicit drug overdoses have risen since the pandemic began, Staley added. He said the overdose data is still early and relies on preliminary data, but it’s concerning because the state had started to see "quarter-after-quarter" declines in overdoses.

Staley explained there are two social forces that the pandemic causes.

The first is solidarity. Everyone is affected by the pandemic in one way or another. Everyone was facing the same stay-at-home experience at the same time.

The second is something that’s emerged after shutdowns began, which may be factors for higher suicide risk. There’s been a spike of unemployment, isolation, and it’s still unclear when this will all end, which has "thrown a monkey wrench" into the comfort of certainty.

In Utah, we are fortunate to have the Emotional Health Relief Line available until 10 p.m. It’s a FREE service from Intermountain or visit https://t.co/1RFivqJT7wpic.twitter.com/qsQl9aQd30

"That can lead to hopelessness, purposelessness, a sense of not belonging and a number of other risk factors that we know lead to suicidality," he said.

The discussion came as many states, including Utah, have begun to reopen aspects of their economy. Dr. Irwin Redlender, director of the National Center for Disaster Preparedness and a clinical professor of health policy and management and pediatrics at Columbia University, said there’s still cause for concern that the pandemic isn’t over, and that reopening too quickly can lead to additional stress. That’s because there is the lingering possibility that another wave of the coronavirus strikes between now and the time a viable treatment or vaccine is discovered — likely in 2021 at the earliest. If states don’t have adequate measures to prevent another spread from happening, a stronger wave might hit.

He said the ordeal has been "very, very distressing to people." Those who are "economically fragile," have preexisting mental health conditions, have substance abuse problems or are elderly, and those who are racial minorities are most at risk, and thus should have stronger access to mental health services, he continued.

Children are also among those most at risk mental health-wise.

"For people who are already preconditioned to be susceptible and vulnerable to mental health stressors, this has not been good," Redlender said. 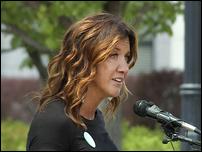 The state is kicking off a new campaign called “Live On” to prevent suicide by promoting education, providing resources and changing the social norms around mental health.

Amid the mental health concerns from the pandemic, state and community leaders launched "Live On" Thursday, which aims to provide Utahns with resources to prevent suicide. Taryn Aiken Hiatt, director of the Utah area of the American Foundation of Suicide Prevention, said seeking help isn’t as much of a taboo subject and people are seeking help in ways they may not have before.

Hiatt said programs help to provide people with newer mental and emotional support. After the pandemic hit, her organization focused on self-care, which included limiting the intake of media and social media and finding ways to combat social isolation.

State officials hope "Live On" — a program that not only provides Utahns with access to suicide prevention help but also provides access for Utahns to help others in need — will help to address.

"We need to continue to support our patients in this unique way because even though the world is opening up slowly, people are still struggling financially, people are still experiencing job loss and financial stress — the schools not opening until the fall, there’s additional family stress," said Allison Foust, suicide prevention program administrator for the Utah Department of Human Services’ Division of Substance Abuse and Mental Health. "Our providers need to also just do what they can to continue to meet the needs of Utahns through telehealth services and other ways to support our families in Utah."

Hiatt said she hopes the program will be integrated into areas where mental health may still be taboo, such as the workplace.

Staley also explained during the webinar that there are plenty of misperceptions regarding how to treat mental health and that there are many ways for people to help. He said there are studies that show that suicide rates in the state could be cut in half with any form of human intervention.

"A lot of people do, but not everybody needs to see a psychiatrist, not everybody needs to see a (licensed clinical social worker), a lot of people just need a confidant or just someone to check in on them to say ‘how’s it going?’" he explained. "We need to make sure that we’re making suicide prevention, drug overdose prevention everybody’s business and not just the business of health care."

Dr. Brooks Keeshin, a child and adolescent psychiatrist, also weighed in, saying parents can see how their children are dealing with pandemic stress by asking them how they are doing. He said this can be done with open-ended questions and by offering a safe environment for children to talk to them.

Experts during the webinar explained that it was important for the state to look into ways to fight mental health issues related to COVID-19 now instead of waiting for any potential fallout in the coming months or years. Proactive measures like creating programs and talking about the issue are ways they hope to solve the problem before it gets out of hand.

That’s because there really isn’t an idea of what will come next from the pandemic. As Staley put it: "As researchers, we don’t really have any historical event to look back on that would tell us where we’re going, where this roadmap is taking us."