'People used to think it was a luxury': Internet use is surging and so is UTOPIA Fiber

MORGAN — It might be a bit easier for the residents of Morgan to stay home now than it was a few weeks ago.

On April 27, UTOPIA Fiber completed its infrastructure in the city, giving the 4,500 citizens access to some of the fastest internet speeds in the nation.

UTOPIA Fiber started as a group of 11 local cities that joined together in 2004 to bring fiber internet to residences and businesses in their areas. The group lays down fiber optic cables, then leases the infrastructure to local internet service providers so residents can choose from a variety.

“We’re all excited about our new fiber connectivity,” said Ray Little, Morgan's mayor. “As Morgan City continues to grow, high-speed Internet is increasingly important for our residents and businesses.”

Little has some stats to actually back up the excitement. About a third of Morgan’s households signed up for the service during the five-month period, leading to all bond payments of the $2.5 million project already being paid off. UTOPIA expects north of 60% of the city will eventually be using fiber.

The completion of the project comes at a time when the internet is needed the most. With most Utah business doors still shut due to the coronavirus pandemic, work has to be done primarily online. That’s made a quick and reliable connection not only a convenience but a near necessity.

“It's been a crazy time to watch what's really happened,” McKinley said. “We're seeing about a spike of about 30% of bandwidth usage, and our peak hours have changed for residential usage.”

In fact, there are now two peaks. The first comes from 3 p.m. to 5 p.m., as employees finish up the workday. The second comes after 8 p.m. when streaming becomes popular. 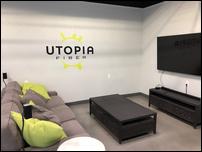 Many residents, especially those in more rural areas, don’t normally have access to more than one or two internet service providers.

With more time spent online, it makes sense for residents to be looking for a better connection. And, so, yes, UTOPIA has had some profitable months.

“We just calculated our sales for the month of April and we are still seeing a staggering amount of customers coming on the network still,” McKinley said. “This would be our second-highest month in UTOPIA’s history.”

That comes from people getting fiber for the first time, but also existing users that have needed to upgrade to accommodate school work done, business being conducted, and entertainment being streamed all at once — for the majority of the day.

“Where some people might have been more price-conscious before, they now might be like, this is more of a necessity to me now,” McKinley said. “And so we've seen this huge uptick of sales. ... People used to think it was a luxury.”

Even before the coronavirus pandemic hit, it had been a busy year for UTOPIA. It finished a $23-million infrastructure build in Layton and began building the infrastructure in West Point as more cities have put their faith in fiber.

“As a governmental agency, we don't have shareholders, we're a steward of the residents of Utah,” McKinley said. “So we go into whatever city comes to us, and we'll go talk to him and say can we make this work? We've done Woodland Hills, which only had 300 residents, and we built out that city.”

The Morgan build is the latest in the line of smaller cities that UTOPIA has built fiber infrastructure in. Others include Perry, Tremonton and Payson.

“We believe we're one of the ways forward for rural Utah to get connected to the 21st century,” McKinley said. “It’s funny because I live in downtown Salt Lake and Morgan, Utah, has better connectivity than I have.”