He had no idea if his football career was over.

But after one of the most vicious hits taken by an NFL quarterback in more than three decades, he was just grateful — to be alive, to have his leg, and to have a supportive family by him every painful step of a medical episode he couldn’t help but wish was over.

And on Friday evening, he shared his story with the world.

The former No. 1 overall draft pick who will be inducted into Utah’s latest Hall of Fame class this fall finally broke his silence about an injury that has kept him out of the NFL for nearly two years — and nearly ended his life, he revealed in an ESPN long-form project titled "Project 11," directed by Daniel Lindberg.

From his star-studded career at Utah to his early struggles in the NFL with the San Francisco 49ers, and a career renaissance with the Kansas City Chiefs, Smith’s rise in The Shield was chronicled by the award-winning ESPN special projects bureau.

Then, in March 2018, at the age of 33, Smith signed a four-year extension worth more than $90 million with the Washington Redskins. Through ups, downs and everything in between, Alex Smith and his family were back on the upswing.

In one collision during a regular-season game against the Houston Texans on Nov. 18, 2018, Smith’s career — and even his life — changed.

The injury was gruesome, drawing many NFL fans’ immediate comparisons to Joe Theismann following a career-ending compound fracture after a tackle by Lawrence Taylor in 1985.

"I remember the play. I remember pre-snap, making a protecting adjustment. It was a pressure look," Smith told ESPN. "To look down and to see your leg crooked, bending where it shouldn’t bend, was an unusual site.

"Immediately, I remember thinking, ‘My season’s over,’" Smith added. "It got pretty painful at that point."

The diagnosis revealed the worst: a compound tibial fracture, an open wound, and necessary emergency surgery in nearby Fairfax, Virginia. He had three plates inserted into his leg, two in the tibia and one to repair another break in his fibula.

"It was black. I mean, the blisters were huge," Smith’s wife, Elizabeth, told ESPN. "I couldn’t fathom seeing it in a war movie."

Bacteria had infected Smith’s leg, which was fully necrotic and filled with dead tissue. Saving his leg became preferable, but optional; doctors resorted to immediate life-saving measures. By the time they finished cleaning out all the necrotic tissue, Smith was missing vast portions of muscle from the knee to his ankle.

“Now we’ve got this lower leg that’s ravaged and deformed,” Smith’s father, Doug, recalled in the documentary, which shows the extent of the injuries in gorey detail. “We’re not even sure we could keep it. Maybe we shouldn’t.”

The Smiths elected to try to salvage his limb, and doctors transferred portions of his calf muscle and the opposite quadriceps to the damaged leg. The initial surgery was a success, but it left him clearly weakened. 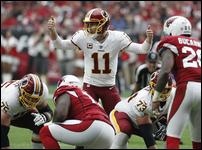 In a two-month period in 2005, the University of Utah claimed the No. 1 overall pick in both the NFL draft and the NBA draft. It’s the only time in history one school has claimed the top pick in both professional leagues in the same year.

He was alive. He had his leg. But his football career? That was far from a certainty.

"I was upset. I was pissed off," Smith told ESPN. "You’re getting a little bit into a why-me-how-did-this-happen? mentality."

Rehabilitation wouldn’t come through NFL physicians, physical therapists and athletic trainers. The Smiths needed an even higher level of expertise.

"As the doctors explained it, he no longer had a sports injury," Elizabeth told ESPN. "He had what was more comparable to a military injury. He had a blast injury."

"Having gone through everything, I feel really good about where I am. Optimistic. Hopeful," Smith told ESPN.

"I’m anxious for the next steps, of what I have left in front of me … So many people have put so much into it. I feel pretty good about the rest of my life, regardless of what happens with football."

The episode is available for replay on WatchESPN and the ESPN app.