SALT LAKE CITY — The head of the U.S. Olympic and Paralympic Committee made it clear Friday there’s no hurry to decide whether Salt Lake City should bid to host the 2030 or 2034 Winter Games even though Sapporo, Japan, is already in the race for 2030.

“We don’t feel any sense of urgency that we’re going to miss an opportunity,” Sarah Hirshland, the CEO of the national Olympic committee, told reporters after a meeting with leaders of the just-announced Salt Lake City-Utah Committee for the Games at the Salt Lake City-County Building.

The new committee, the mayor said, shows support “to pursue this and do it right. So we’re taking the right steps. We’re putting the team in place. We’re beginning the evaluation and conversations, and we are not going to rush a decision of this scale.”

Hirshland said there’s plenty of time to evaluate which year is better for the national Olympic committee as well as for Salt Lake City and Utah. Much of the national committee’s efforts are focused on Los Angeles, the host of the 2028 Summer Games.

“The next available Games, as you know, is not until 2030, which is still quite a long way away. So it isn’t a function of a lack of interest,” she said. “Frankly, it’s simply a function of we are well ahead of a typical schedule in naming future venues. So the opportunity for us is really to continue to evaluate. We have time on our side on that.”

There is no timeline for choosing which of the next two Winter Games Salt Lake City should bid for, Hirshland said, and there doesn’t need to be one despite Sapporo’s recent announcement and the International Olympic Committee’s new, more informal host city selection process.

“Sapporo’s decision was a decision made exclusively by them,” she said. “If we determine 2030 is the right time for the state of Utah, the city of Salt Lake and the USOPC, we’ll be ready and we’ll be right in the mix as we need to be. If we determine that 2034 looks more optimal or there’s another opportunity, we want to make sure we’re really inclusive of all of our options and are confident we’re not going to miss anything.”

Those options, Hirshland acknowledged, could include not bidding for a Winter Games.

“I think you have to be open to every possibility. The commitment that I think we share together is to do the work and make sure that this the right opportunity for everyone involved,” she said. “As long as that opportunity is there for everyone involved, then we’re super excited about pushing forward and I think the optimism is absolutely there.”

Hirshland and other national Olympic officials in town to attend the world speedskating championships underway at the Utah Olympic Oval in Kearns, also made a stop at the state Capitol, where they met with Gov. Gary Herbert, House Speaker Brad Wilson, R-Kaysville, and Senate President Stuart Adams, R-Layton.

The governor’s spokeswoman, Anna Lehndart, said afterward that he “appreciates the opportunity to meet with USOPC and looks forward to working with the newly appointed (Salt Lake-Utah) committee to show Utah is ready, willing and able to host a Winter Olympics.” 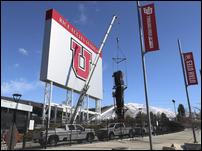 Cranes and construction workers surrounded the Olympic Cauldron Park Thursday afternoon in preparation for the Rice-Eccles stadium expansion, only to face a small hiccup.

Herbert told KSL after the committee’s membership was announced Wednesday that “the bottom line is, we’ll get what we can get,” and said getting the 2030 Winter Games “might be a little more problematic, I think, timewise,” coming on the heels of another American city, Los Angeles, hosting in 2028.

Adams said he stepped off the Senate floor for the meeting.

“We’re talking. There wasn’t a lot of conversation from me about which year,” the Senate president said. “We’re preparing and when the opportunity comes forward, we’ll be ready.”

He said the Legislature has a budget request for $6 million toward updating the state’s Olympic venues, that include a ski jump and a bobsled, luge and skeleton track in Park City as well as the oval, money that’s going “to be hard to come by but we hope to find some funding for that.”