SALT LAKE CITY — Utah’s two senators were among the overwhelming majority who voted Thursday for a revised trade agreement with Mexico and Canada designed to create hundreds of thousands of new U.S. jobs.

The Senate passed the U.S.-Mexico-Canada Agreement 89-10, sending it President Donald Trump’s desk. Passage of the pact fulfill’s Trump’s 2016 campaign promise to update the 26-year-old North American Free Trade Agreement with Mexico and Canada. The House approved it in December.

Sen. Mitt Romney said though the new pact isn’t perfect, it was long overdue and would benefit workers and farmers in Utah and across the country.

“This trade deal creates more balanced and reciprocal trade, raises labor standards, and protects our technology and intellectual property from those who don’t play by the rules,” he said.

Romney said he was disappointed that protections for the biologics industry were not included in the final deal, but Utah’s dairy farmers will benefit from access to new markets in Canada and Mexico. The agreement also supports communities that were disproportionately harmed by the effects of NAFTA, he said.

As one of few states with a trade surplus, Utah made an attractive backdrop for Vice President Mike Pence to promote the languishing trade agreement last summer. 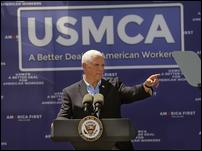 Vice President Mike Pence is visiting Utah as the next stop on a trip to promote the Trump administration's trade deal with Mexico and Canada.

In a speech at Merit Medical, Pence said the nation knows that Utah knows how creates jobs, and asked people to spread the word that it’s a priority for the state’s economy. He said the deal would boost the nearly 20% of Utah’s exports already going to those countries.

More than 3,500 companies in the Beehive State export about $16 billion in goods and services worldwide each year, about $4 billion more than Utah imports annually. Utah sends $2 billion worth of goods to Canada each year and $750 million worth to Mexico. Exports have doubled to Canada and tripled to Mexico over the past five years.

The new pact will replace rules for moving products among the three countries, essentially eliminating tariffs on most goods.

The deal will not go into full effect until Canada approves the agreement. A vote is expected in the coming weeks. Mexico passed the revamped agreement in December.