In an online town hall Wednesday, the Utah Republican also revealed that like Sen. Mitt Romney, R-Utah, he once had a secret Twitter account, though he didn’t disclose its name.

Lee attacked the “mythical” belief that federal ownership and management of public lands is better than state or local control.

Lee’s comments came in response to questions from rural county commissioners and former GOP state Rep. Ken Ivory, who have long argued for the state to take over management of millions of acres of federal land. The senator’s office lined up the officials ahead of time to keep the town hall focused mostly on public lands issues.

This weekend, Lee will bring several members of Congress, including Senate Energy and Natural Resources Chairwoman Lisa Murkowski, R-Alaska, to Moab for a discussion on “successes” in state management of state and federal public lands in Utah.

“The environmental devastation that the federal government has wrought upon our state and upon other predominantly public land states is enormous,” Lee said.

The senator said it’s false that entrusting management to the state would cause the lands to no longer be public or to become part of an “environmental hellscape.” He said he’s not talking about the state taking over national parks or designated wilderness, but putting to use “garden variety” Bureau of Land Management acreage.

“It’s not that anybody wants to install a drilling rig underneath Delicate Arch,” Lee said.

“It is not the wealthy and well-connected who suffer from excessive federal land ownership, Lee said. “It’s the poor and middle class in our state, particularly those in rural communities who are hardest hit.”

Piute County Commissioner Darin Bushman said his office calculated that if federal land were taxable, the county would get about $2.9 million. Instead, it receives $250,000 a year under the government’s Payment In Lieu of Taxes, or PILT, program.

“At the end of the day, it’s kind of a spit-in-the-eye scenario. It’s payment in lieu of trillions,” Bushman said. “We either need to get to a point where we effectively use these lands in a multiple use scenario or the federal government pays the real tax on these lands.” 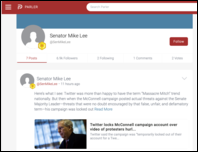 Why has Utah Sen. Mike Lee joined a Twitter alternative and is urging others to do the same?

Sen. Mike Lee has joined what he calls an unbiased alternative to Twitter that attracts conservatives who were banned from other social media platforms.

When Lee opened the town hall to other issues, one caller asked if he has a private Twitter account, and perhaps it could be named “Miguel Leon.”

Lee said he didn’t have one but that would be a “fantastic” name if he did. The senator said he had a private account a few years ago but never used it, so it was discontinued. Lee said he tweets through his Senate office and campaign accounts, but not on a personal basis.

Over the weekend, Romney revealed that he has been secretly using a Twitter account under the name Pierre Delecto to read political news and keep track of politicians and others. He also apparently used it to defend himself against criticism on social media.

Created in July 2011, the account was made private after the story broke.