Ben Anderson: Where will the Jazz have weaknesses this season?

SALT LAKE CITY — The Utah Jazz retooled this summer and had as successful of an offseason as just about any team in the NBA.

Short of adding Hall of Famers, the Jazz impressively filled the weaknesses the team showed last season. Most notably, those weaknesses were a lack of shot creation outside of Donovan Mitchell and a lack of consistency at point guard.

Too often last season, the Jazz would rely heavily on Mitchell’s offense late in games. If he was making shots, the Jazz were strong; if he wasn’t, they were helpless. Point guard Ricky Rubio had a strong sense of head coach Quin Snyder’s offense but wasn't a threat as a scorer. He struggled both to spread the floor beyond the 3-point line and to finish consistently at the rim.

With the addition of Mike Conley Jr., the Jazz should even out the point guard play. He has a career 44% shot from the floor, compared to 39% for Rubio. Conley, as well as forward Bojan Bogdanovic, averaged better than 18 points per game last season, which should help Mitchell and the Jazz with their lack of shot creation from last season.

The Jazz won’t enter the season as a perfect team, though; and by the time opponents have an opportunity to scout the team more thoroughly, the Jazz's flaws will become more apparent.

A month out from the team retaking the floor for training camp, here’s where I think those flaws may pop up:

The biggest problem for the Jazz may still be offensive efficiency, largely as a result of Mitchell’s still inconsistent offensive games. Through the first half of the season, Mitchell averaged a very respectable 22 points, but shot just 41% from the floor and 32% from the 3-point line to get there.

It took Mitchell a staggering 19.6 field goal attempts per game to reach his scoring mark, which is simply too many with those poor shooting percentages. But after the All-Star break, Mitchell’s numbers climbed to 26 points a game and he shot a blistering 46% from the floor and 45% from the 3-point line.

Mitchell’s field goal attempts also climbed to over 20 per game. But at those percentages, the more shots he gets the better.

In his third season, Mitchell needs to keep his field goal percentage in the mid-40's while he lifts his 3-point shooting percentage closer to 40%. If he can do that, he’ll truly be one of the most dangerous scorers in the NBA; if not, the Jazz offense may ebb and flow too much to be a championship contender.

With rumors circling that the Jazz may be more inclined to play Dante Exum off the ball in his sixth NBA season, either Emmanuel Mudiay or Nigel Williams-Goss will likely be listed as the Jazz backup point guard. The problem, Williams-Goss has never played in the NBA and Mudiay has struggled in the past.

Even if the Jazz choose to keep Exum at backup point guard, he hasn’t fared much better with ball-handling duties. Last year, many of the backup minutes went to Raul Neto, who will suit up for Philadelphia next season. That put extra stress on Mitchell, who when Rubio, Exum and Neto dealt with injuries, was forced to assume lead guard duties.

Should Mudiay and Williams-Goss struggle, Mitchell may have to, again, fill extra minutes at point guard, which will add wear and tear to his body.

Good backup guard play is one of the best weapons in the NBA. Just look at reigning Sixth Man of the Year Lou Williams with the Los Angeles Clippers and the Toronto Raptors' Fred VanVleet, whose hot shooting helped deliver a championship to Toronto last season. Inconsistent point guard play can derail an entire offense, whether it’s a starter or reserve. If the Jazz bench can’t find a consistent ball handler, the entire unit might struggle.

Lack of a reserve scorer

Speaking of the bench, the lack of an obvious reserve scorer could sink the second unit. If the Jazz choose to start Conley, Mitchell, Joe Ingles, Bogdanovic and Rudy Gobert, they’ll have one of the best starting units in the NBA. But only the newly acquired Jeff Green and Mudiay are expected to carry the scoring load off the bench.

The Jazz lost reserve center Derrick Favors, another staple for the bench over the last half-decade who was a reliable scorer and intimidating rim protector. Green and Mudiay would be joined by Exum, Royce O’Neale and newcomer Ed Davis — each of whom carries impressive defensive identities but isn’t known for their scoring prowess.

The Jazz will balance this by keeping either Mitchell or Conley on the floor for the majority of the game, while Ingles and Bogdanovic can play a variety of roles alongside the Jazz reserves. Still, the best teams in NBA history tend to have a reliable scoring threat off the bench, even sacrificing a starting-caliber player for a bench role, like Clippers with Williams or the Spurs with Manu Ginobili.

Don’t be surprised if the Jazz follow suit and move Ingles to the bench early in the season to aid the bench unit offensively.

Finally, are the Jazz big enough? The Jazz moved on from Favors to sign Bogdanovic. It was the right move, but the frontcourt of Gobert and Favors gave the Jazz tremendous size at center at all times on the floor. Now, Davis will get the majority of the backup frontcourt minutes alongside Green, who weigh 20 and 30 pounds less than Favors, respectively.

Conley stands at 6-foot-1, and Mitchell is listed at a generous 6-foot-3. This makes for one of the smaller starting backcourts in the NBA. Ingles and Bogdanovic have great size, but their style of play doesn’t highlight their size on the interior. There will be nights when the Jazz are outmuscled by bigger teams (see the Philadelphia 76ers).

The Jazz made notable improvements this summer and will reap the benefits of a more talented roster in the upcoming season, but no team is perfect. As the Jazz's new strengths are revealed, so to will their weaknesses. 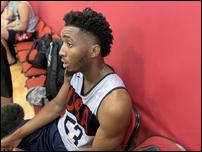 Donovan Mitchell is gearing up for a run with Team USA at the FIBA Basketball World Cup in China, and outside of a few exhibition games during the past two All-Star weekends in the Rising Stars Challenge, Mitchell has never played with a surrounding cast as talented as the one on Team USA.