Epstein, who was awaiting trial on federal charges accusing him of sexually abusing underage girls, was found unresponsive in his cell at New York's Metropolitan Correctional Center, a federal detention facility, around 6:30 a.m. ET., the Federal Bureau of Prisons said.

Staff at the facility started life-saving measures, and Epstein was taken to a hospital, where he was pronounced dead, the bureau said in a news release.

No foul play is suspected in his death, a federal official told CNN. The bureau's release called it "an apparent suicide," and said the FBI is investigating. Authorities believe Epstein hanged himself, a law enforcement source said.

In custody for weeks

Epstein had been jailed since early July, when he pleaded not guilty to charges by New York federal prosecutors after an indictment accused him of running a sex trafficking ring of underage girls, some as young as 14 years old.

A judge denied him bail in mid-July -- rejecting his request to remain under house arrest at his Upper East Side mansion, one of the largest private residences in Manhattan. Epstein was set to go to trial at some point next year.

US Attorney General William Barr said Saturday that he was "appalled" to learn Epstein died of an apparent suicide in federal custody. The Justice Department's inspector general will investigate the circumstances of his death, Barr said.

"Mr. Epstein's death raises serious questions that must be answered," Barr said in a news release. Separately, a source familiar with the situation said Barr was livid at the events surrounding Epstein's apparent suicide and is determined to get to the bottom of what happened.

The US attorney in Manhattan, Geoffrey Berman, called the day's events "disturbing."

"We are deeply aware of their potential to present yet another hurdle to giving Epstein's many victims their day in Court," he said. Berman, whose office was prosecuting Epstein, added that "our investigation of the conduct charged in the Indictment -- which included a conspiracy count -- remains ongoing."

An attorney for Epstein, Marc Fernich, called for a "full investigation into the circumstances surrounding Mr. Epstein's death."

Fernich said he was speaking personally, not as a representative of Epstein's defense team. He said several parties can be blamed for the death, including "overzealous prosecutors," "pandering politicians," compliant judges" and a "hysterical press corps."

"The public needs to know exactly what happened and why -- and how his custodians could have let it occur," Fernich said.

CNN has reached out to his attorneys for comment.

He was put on suicide watch in July, but was taken off days later

Just weeks ago, Epstein was temporarily placed on a suicide watch after he was found July 23 in his Manhattan jail cell with marks on his neck, a law enforcement source and a source familiar with the incident told CNN at the time.

It was not clear in July to jail officials if those injuries, which were not serious, were self-inflicted or the result of an assault, the sources said. Epstein told authorities he was beaten up and called a child predator, they said.

Daily psychological assessments were conducted on him, and at the end of the month, psychologists with the Bureau of Prisons took him off suicide watch, according to a source familiar with the matter.

Appearing in court a week after he was apparently found harmed in his cell, Epstein had no visible injuries and at one point smiled after a moment of confusion between his attorney and the judge.

At 66 years old, Epstein had faced decades of questions about his behavior, including allegations that he had improper interactions with minor girls and scrutiny surrounding the source of his wealth.

In July, federal prosecutors in New York unsealed an indictment that accused Epstein of paying girls as young as 14 to have sex with him at his Upper East Side home and his estate in Palm Beach, Florida, between 2002 and 2005.

Federal prosecutors said he used employees and associates to lure the girls to his residences and then paid some of his victims to recruit other girls for him to abuse.

Epstein faced similar accusations in Florida in 2007 but signed a plea deal that year with Miami prosecutors allowing him to avoid federal charges and plead guilty to lesser state prostitution charges.

A Miami Herald series on the plea deal and the new charges in July renewed attention on the plea deal, spurring outrage against it and leading to the resignation of Trump administration Labor Secretary Alex Acosta, who negotiated the plea agreement when he was the US attorney in Miami.

"Among those who share blame in Epstein's death, he said, is a "hysterical press corps clamoring to recharge Mr. Epstein with dated crimes for which he'd long since paid his debt to society under an arm's length plea deal -- just because he had the misfortune to be a wealthy man in the #metoo era whose former prosecutor happened to take a job with President Trump," Fernich's statement reads.

Other criminal cases could arise

But while Epstein's demise ends the criminal case against him, there are indications prosecutors could pursue related criminal cases involving his associates or employees.

Though Epstein was the only person charged in the indictment unsealed in July, the court papers described three unnamed employees who scheduled his alleged victims to provide "massages" that escalated to sexual acts and paid victims with hundreds of dollars in cash.

For example, one person referred to in the indictment as "Employee-1" called girls who had previously been lured into encounters with Epstein to arrange future visits to his New York residence.

In addition, federal prosecutors recovered a wealth of material from a locked safe in Epstein's Manhattan home after agents executed a search warrant on the property in the hours after Epstein's arrest.

In addition to a "vast trove" of lewd photographs of what appeared to be underage girls, agents found compact discs that indicated they showed individuals other than Epstein, with hand-written labels that read, "Young [Name] + [Name]."

"(Epstein's) estate, you can imagine, would be sued by a lot of potential victims. So, his suicide will not end coverage and the interest in the Jeffrey Epstein case," Callan said.

Though no precise accounting of Epstein's wealth has been made public, and even prosecutors have said in court that they have been unable to determine the scope of his assets, he was, at a minimum, a multimillionaire.

The financier owned properties in Manhattan, Palm Beach, New Mexico and Paris, as well as a private island in the Caribbean, according to court filings. He owned at least 15 vehicles and a private jet.

And when agents searched his New York City home in July, they found more than $70,000 in cash and 48 loose diamonds, prosecutors said.

One such lawsuit is expected to be filed as soon as Wednesday by a woman who alleges Epstein raped her when she was 15. Wednesday is the day that New York's Child Victims Act goes into effect, giving adult survivors of child sexual abuse one year to sue an abuser for offenses in New York, no matter how long ago the abuse took place.

The accuser in that pending lawsuit, Jennifer Araoz, said Saturday that she is "angry Jeffrey Epstein won't have to face his survivors of his abuse in court."

"We have to live with the scars of his actions for the rest of our lives, while he will never face the consequences of the crimes he committed the pain and trauma he caused so many people," she said in a prepared statement.

Robbie Kaplan, an attorney for one of the alleged victims in the criminal case, said Saturday that "the many victims of Jeffrey Epstein and his accomplices should not lose hope."

"We will continue to fight tirelessly on their behalf not only to seek justice, but also to ensure that all of the facts of his monstrous crimes become known to the world," she said. "... We need to expose the whole truth here so that crimes of this scale and scope never happen to any young girls (or boys) ever again." 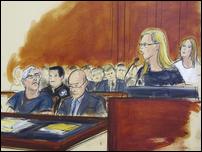 A judge who denied bail for jailed financier Jeffrey Epstein on sex trafficking charges Thursday said he poses a danger to the public and seems to still have an uncontrollable urge for sexual conduct with or in the presence of underage girls.
Suicide Prevention Resources
If you or someone you know is struggling with thoughts of suicide, call the suicide prevention hotline at 1-800-273-TALK.

Information from the American Foundation for Suicide Prevention.
×