SANDY — A day up the canyon to celebrate her mother’s 70th birthday had a dramatic ending after mud and debris came rolling down the mountain in Little Cottonwood Canyon.

Jill Caree and her siblings tried to come down the mountain Thursday night. The rest of her family had left earlier in the day.

“By the time we left, it was like sheets of rain coming down,” Caree said. “That’s when the mountain just started sliding off in sheets, onto the car. I’ve never seen anything quite like it.”

As mud started flowing down the mountain, Caree said they pulled over and stopped alongside the road. Eventually, another driver noticed more debris coming down.

Some intense moments, Captured by Jenae Anderson and her siblings, as they tried to get out of Little Cottonwood Canyon last night. Their story, on @KSL5TV at 5&6pm. pic.twitter.com/iEjNKoM5kw

“He just started screaming, ‘Go, go, go!’ and flashing his lights,” Caree recalled. “So we just booked it back up the mountain where we had to stop again, because there were huge logs and boulders all over the road.”

Along with dozens of others, Caree and her brother and sister were taken back up the mountain where they spent the night at Snowbird.

“None of the employees even knew what was going on yet. I showed them pictures, and they were all in shock,” Caree said. “They asked me to send them the videos so they could send them to their families, and let them know they weren’t going to be home.”

Caree said rooms quickly filled up, and some people slept in the lobby. She said employees worked through the night to help as much as they could.

Back down the mountain, workers with the Utah Department of Transportation worked through the night to clear boulders, trees, and mud. 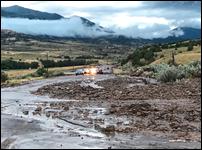 Three canyon roads remain closed Friday morning as crews work to clear mudslides. State Route 210 in Little Cottonwood Canyon is closed with no estimate on when it may reopen, according to the KSL Traffic Center.

“I have never seen anything like this in my 18 years career,” said Jake Brown, UDOT’s roadway operations manager for the Cottonwood Canyons. “The whole draw up above us, where this equipment is working, just completely emptied out. It’s unbelievable how much material was moved by water.”

Workers allowed people to come down the mountain during a 30-minute window. Caree and her siblings, however, got the news too late and missed that chance. Friday afternoon they were preparing to try and make it down during another opening between 5:30 and 6 p.m. Otherwise, she said, there are worse places to be stranded.

“Everybody’s in high-spirits. It’s been awesome, just bonding with people that were here through the night,” Caree said.

By early Friday evening, UDOT workers were planning to continue clearing the road through the night again. Another half-hour opening was scheduled for 6 a.m. Saturday, with hopes of having the road open by sometime in the afternoon.