Use your dynamic scoring guard, ideally Donovan Mitchell, to attack the rim off a screen from the league’s best screen setter in Rudy Gobert. If the defense tries to switch, Mitchell either scores at the rim or throws a lob to Gobert.

If the defense sags off Mitchell, he knocks down the open shot. If the defense throws an extra defender at either Mitchell or Gobert, the Jazz find an open perimeter shooter and that player makes the defense pay.

There’s really only been one problem.

Next to both Mitchell and Gobert, the Jazz have never had enough shooters to make the offense click the way it’s supposed to. Derrick Favors never developed his outside shot; Jae Crowder was a willing shooter but not a frequent enough maker; Joe Johnson was the ideal fit, but he was in the twilight of his career and couldn’t carry the scoring burden for an entire season.

Ricky Rubio was supposed to step in for the departing George Hill, adding a steady hand next to Gobert and providing enough shooting to keep the defense honest. Rubio’s shooting never improved from his time in Minnesota, and when paired with Gobert and Favors, the Jazz simply had too many non-shooters on the floor.

As a result of never finding a big man that could stretch the floor, the Jazz relied on Favors and Gobert to start games during the regular season. And it worked for just under 50 wins on average each season over the last three years; however, in the postseason, when the games were most important, the Jazz often resorted to starting either Johnson or Crowder in place of their two big lineup.

Finally, after several tries, it appears the Jazz have found their shooters, both in the front and backcourt to surround Mitchell and Gobert. 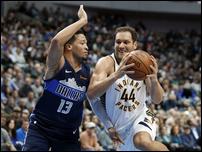 It wasn’t just empty talk when Utah Jazz general manager Justin Zanik emphasized that the Jazz were going to be “aggressive” in free agency.

On June 19, the Jazz traded Crowder, Kyle Korver and Grayson Allen for Mike Conley Jr., a career 37% 3-point shooter. On Sunday, the Jazz signed forward Bojan Bogdanovic, a career 39% 3-point shooter, who knocked down better than 40% of his threes each of his last two seasons.

After years of searching, the Jazz now have the talent and the roster skillset to fully realize the offensive identity they have sought but never fully realized.

But it shouldn’t be overlooked how significant the Favors and Gobert lineup was for the Jazz identity, even when Crowder and Johnson may have made more sense in the starting lineup, the Jazz opted for size.

Jazz agree to a deal with big man Ed Davis

The Utah Jazz have added some depth up front.

After signing Bogdanovic, the Jazz quickly replaced what they were losing in Favors by signing Davis, who can play both frontcourt positions. If Bogdanovic is better suited to play small forward, the Jazz could move Davis back into Favors' role in the starting lineup and move Ingles to the bench.

The Jazz front office has asked its fan base to be patient, while the organization looks for the ideal players to fit its offensive identity. By acquiring Conley Jr., Bogdanovic, and Davis, the Jazz re primed to finally realize their long sought after identity.

Ben Anderson is a sports contributor for KSL.com. Follow him on Twitter @BensHoops. Listen to him 2-6 p.m., Monday through Friday with Kyle Gunther on ESPN 700.