HILL AIR FORCE BASE — A squadron of Utah airmen will be taking their talents to Idaho for the next couple of months.

This week, the 34th Fighter Squadron and 34th Aircraft Maintenance Unit are transitioning F-35A Lightning II operations to Mountain Home Air Force Base while the runway at Hill Air Force Base is shut down for construction.

In all, more than 250 airmen from the active duty 388th and Reserve 419th fighter wings are heading north for a two-month stint along with as many as 24 aircraft, according to a news release. The Hill runway will undergo a $43.6-million repair and expansion project.

"The project to rehabilitate the runway at Hill Air Force Base will include repaving, upgrading the electrical system and widening the shoulders," said Thomas Mullican, public affairs chief for the 75th Air Base Wing at Hill Air Force Base. "Some of the work is repair, while others are complete reconstruction."

He said the runway was originally built in the WWII era and most recently repaired in 2005.

The components not in compliance include 1,000-foot overruns at each end of the runway, he said. The overruns are not part of the runway, but are paved surfaces used only in emergencies when an aircraft needs an additional 1,000 feet to safely land.

"The overruns were sloped too steeply. We wanted to correct those," Mullican said. "Another thing we wanted to do was widen the shoulders from 20 to 25 feet. In order to do that we had to reconstruct the entire shoulders. We have a lot of electrical issues because the system is extremely old."

The squadron will operate out of the Idaho installation until the current phase of runway construction is completed in early August, 388th spokesman Micah Garbarino said.

During their time in Idaho, the squadron will perform usual duties and conduct normal military operations in addition to engaging in exercises and integrating with other Air Force units, the release stated. 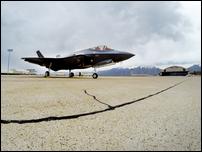 F-35s from Utah's Hill Air Force Base have deployed to the Middle East for the first time.

The Utah airmen are scheduled to fly every weekday except holidays or planned no-fly days. Most of the squadron's flying exercises will take place around the base and the area's range complex.

In June 2016, the 34th Fighter Squadron also operated out of Mountain Home as part of a mock deployment to assess readiness preceding the Air Force declaring operational capability for the F-35A aircraft.

Garbarino said the 34th leaves just as the 4th Fighter Squadron is deploying to the Middle East and the 421st Fighter Squadron deploys to Europe. This is the first time that all three squadrons have been gone since the wing received the F-35A in 2015, he said.