And while the Utah Jazz exited the playoffs early, there are some bright spots across the NBA playoffs that could provide the Jazz with optimism for the franchise’s future.

The first thing that jumps out about the four remaining teams are that outside of Golden State, located in Oakland, none of these teams are in traditionally major NBA cities. While Toronto is a major metropolis in Canada, it’s never been a free agent destination, nor has Milwaukee or Portland.

These teams have built themselves into conference finals contenders in large part to solid drafting, smart spending on lower level free agents and opportunistic trades.

Milwaukee drafted MVP candidate Giannis Antetokounmpo with the 15th pick in the largely awful 2013 NBA draft. They acquired All-Star Khris Middleton as a throw-in from the Detroit Pistons in a trade for Brandon Jennings. Eric Bledsoe joined the team to rebuild his career after an ugly stint in Phoenix, and they drafted Malcolm Brogdon in the second round. The rest of the roster was built with low-cost free agents or timely trades looking to push the roster over the top.

The Trail Blazers have drafted well, too, finding Damian Lillard from Weber State in the middle of the draft lottery, while adding CJ McCollum in the same 2013 draft that netted the Bucks Antetokounmpo. Portland got big contributions from former Jazzmen Enes Kanter and Rodney Hood, who were largely scooped off the NBA scrap heap this year, and are otherwise a roster made up of mostly small free agent signings.

Likewise, outside of the trade for Kawhi Leonard who is a true superstar, the Raptors are a roster built on opportunistic trades, including Kyle Lowry, who has become a five-time All-Star in exchange for one first round pick. Pascal Siakam, arguably the Raptors second best player, was drafted with the 27th pick of the 2016 NBA draft.

These three teams haven’t had to rely on the allure of their city to bring in star players and have built their rosters through excellent scouting and an understanding of their team’s needs in free agency. Drafting well has been a cornerstone for the Jazz — one that has landed them both Rudy Gobert and Donovan Mitchell.

With the exception of Joe Johnson, who was a contributor for the Jazz, franchise-changing free agency moves have otherwise eluded the team.

The problem for the Jazz, and it’s not to be overlooked, is that three of these four remaining teams also have at least one of the top five players in the NBA, with the Warriors arguably holding two of the best in Kevin Durant and Stephen Curry.

Any of those players can take over and accomplish the seemingly impossible in any game and at any stage. Neither Gobert nor Mitchell has proven capable of doing that on the biggest stages consistency. 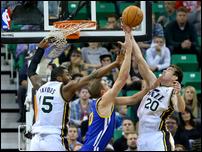 By the numbers: Utah Jazz season in review

After a 4-1 first round exit from the playoffs, it's easy to label the Utah Jazz's season as a failure. But after surviving a difficult early-season schedule, the Jazz got hot at the end of the season. (Photo: Tom Smart, Utah Jazz.)

Portland, who lacks a true top five player, still features the talents of Lillard, who has shown he’s an offensive weapon from anywhere beyond half court and is a threat to score 50 points on the NBA’s biggest stage. While Mitchell may get there, he hasn’t shown an ability to do that quite yet.

The Jazz should take some solace that an early exit isn’t a signifier of impending doom. But beyond that, the teams that have survived have more in common with the Jazz than we’ve seen in previous season, and playing in a major city may not be the only path to success in the NBA.

The Jazz found themselves with a first round exit, but so did both Portland and Milwaukee last season. Perhaps next season the Jazz can find themselves playing into late May. Ben Anderson is a contributor at KSL.com, follow him on Twitter @BensHoops. Listen to him 2-6, Monday through Friday with Kyle Gunther on ESPN 700.