Lagoon's new ride could be ready as early as 2021

FARMINGTON — If you noticed all the construction near Lagoon and wondered if there was a new ride coming — you were right!

Though it’s all still very “hush-hush,” Lagoon’s new attraction could be ready by 2021, according to Lagoon spokesman Adam Leishman. The park won’t confirm the exact date until the construction is a little further along, however.

“We don’t want to commit to something and have it unforeseeably change, so that’s one reason," he said. "We hope we can make an official announcement in the next year or so, but people should expect to see the skyline change in the next little bit.”

The new attraction isn’t close to any of the other rides in the park but is in the northeast section of the grounds. Leishman said the ride is directly north of The Rocket — the tall white tower that drops riders unexpectedly.

Though the park just recently broke ground on the project in the fall, it’s been in the works for “longer than I’ve been aware,” Leishman said. The popular Cannibal ride at Lagoon was a seven-year project with 2.5 years of construction — and the new ride proves to be a similar type of project, he added.

“It’s something specific for Lagoon. … It’s one-of-a-kind,” he said. 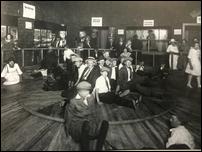 130 years of Lagoon: How ‘fun’ has changed over a century

For the past 130 years, Lagoon has been a Utah staple for amusement, family fun and much more. As summer approaches, we take a look back at how Lagoon has grown into an iconic business within the state.

Leishman said he wasn't sure yet of the total cost (that will be calculated at the end), but the new ride will be a “significant investment” for the family-owned amusement park, he added.

“(Lagoon) is the largest family-owned amusement park in the country and actually a rarity. … Most parks are owned by corporations,” Leishman said. “So being a family amusement park, we just make decisions that we think will be best. … We just kinda do what we want.”

While the ride will probably not be appealing to younger children, Leishman is confident it will be very popular with the general public.

“It’s fun for us to have a surprise.”