SALT LAKE CITY — After years of struggle, a bill that would give teeth to Utah's hate crime law blasted through a major legislative hurdle Tuesday — almost clearing its way to Gov. Gary Herbert's desk for final approval.

The Utah House of Representatives — after nearly an hour of emotional debate — voted 64-9 to approve SB103.

Hate crimes PASSES, blasts through the House with wide support. It now goes back to the Senate where senators will need to concur with changes before it can go to @GovHerbert#utpol#utlegpic.twitter.com/05zpNcrXSQ

But the bill advanced only after it was changed to include "political expression" in a list of protected categories of people, including race, religion, gender, sexual orientation or gender identity. If perpetrators are found guilty of targeting a protected class, they could be prosecuted with an enhanced penalty under the bill.

Because the bill was changed, it now goes back to the Senate floor — where it's expected to clear the Utah Legislature on a final vote.

Gov. Gary Herbert is expected to sign the bill, according to a statement issued from his office.

"Gov. Herbert appreciates the great work of the Legislature in passing this important piece of legislation, which will serve as a powerful tool in providing critical protections to marginalized groups and persons," the statement said. "He looks forward to it landing on his desk and signing it into law."

Outside the House chamber, the bill's sponsor, Sen. Daniel Thatcher, R-West Valley City, celebrated after the vote. He told KSL he expects it to sail through the Senate Wednesday. Even with the change, he said he expects to "pick up a couple of votes."

I appreciate the great work of the legislature on SB103, which will serve as a powerful tool in providing critical protections to Utah residents. I look forward to it landing on my desk and signing it into law. #utpol@SenThatcher

While some conservative House Republicans dug in their heels against the bill, concerned it would extend additional protections to some groups but not others, other once-staunchly opposed Republicans voted in favor.

Among them was Rep. Merrill Nelson, R-Grantsville, who recalled 25 years ago, sitting in a committee when supporters backing Utah's first hate crimes statute placed a Ku Klux Klan hood on lawmakers desks, suggesting if they didn't support it, "we would have, I guess, sympathies with the Ku Klux Klan," Nelson said.

Nelson said he opposed the law then, and it was defeated. He, along with others, were "accused of being bigoted," Nelson said, and he's "lived with that for many years."

But this time around, Nelson said, the law seems to be "materially different." This time, the bill focuses first on whether the crime is specifically targeted, he said. While he called it an "imperfect bill," he ultimately spoke in support of it.

"I hear people say, 'Well I'm not included on the list. None of those categories covers me.'" Nelson said. "Rather than complain about not being included, we should probably give thanks that we're not included." 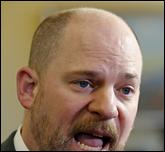 A bid to strengthen Utah's hate-crimes law is passing its first vote state Senate following an occasionally emotional debate over the long-stalled idea.

The vote was a historic moment for the Utah Legislature, which for years hasn't approved changes to the state's hate crimes law — even though prosecutors, including Utah Attorney General Sean Reyes, say the law as currently written is "unenforceable."

After the House's vote, the attorney general said it was a "good day for every family who's ever been afraid to leave their house" or for "every father or mother who has stayed up late at night worrying about whether they should let their kids go to school."

"Some of us have felt these things our whole lives. And I'm glad that the Legislature was enlightened and courageous in coming forward and saying, 'It's time,'" Reyes said.

But the bill did not advance without opposition — as well as the insistence that it include protections for "political expression."

Rep. Norm Thurston, R-Provo, proposed the amendment in the bill's list of protected categories, arguing "it's not OK" to "lash out" at someone for participating in the political process.

Rep. Karianne Lisonbee, R-Clearfield, broke down in tears on the House floor when speaking in favor of the amendment.

Lisonbee — who received backlash for the role she played in the alterations that essentially gutted the bill to ban conversion therapy in Utah — said, "as many of you know, I've been targeted."

"I have had hateful things said about me. I have experienced death threats over the last few days," she said through tears. "I have had people tell me, 'How dare you play the victim card.' And I ask you, is not having somebody threaten you making you a victim?"

But House Minority Assistant Whip Angela Romero, D-Salt Lake City, argued people targeted for crimes because of their race, religion, gender identity or other reasons included in the bill was "very different."

"I empathize with my colleague, but many of us have received threats and people have condemned us for issues that we believe in, but it's very very different than because of who you are as a person," Romero said.

Rep. Phil Lyman, R-Blanding, was among the nine Republicans who voted against the bill, arguing it gave prosecutors a "dangerous" tool to seek enhanced penalties. He questioned whether prosecutors would use it correctly.

"It's a really dangerous thing when we start putting tools in the hands of prosecutors who clearly have no accountability to the people," Lyman said. "They have one job to do: Get a guilty verdict. And they will do anything they can to get it."

Another Republican, Rep. Mark Strong, R-Bluffdale, opposed the bill because he worried "so many topics" are becoming "taboo" in today's world.

But the bill's House sponsor, Rep. Lee Perry, R-Perry, said he was "not a fan" of the bill at first. But now, he said he understands why it's important.

"We need to extend protection to a little African American girl that gets beat up … just because of the color of her skin," Perry said, choking back tears. "This is good public policy."