SALT LAKE CITY — Some lawmakers worried aloud Wednesday that a 120-year-old Utah law could be used as an unwarranted hammer to restrict recreational access to water for the protection of a watershed.

"I guess I have concerns about an overzealous municipality or city council," said Rep. Carl Albrecht, R-Richfield. "At some point, will some city council or municipality propose some ordinance that there be no more than 50 boats on Deer Creek Reservoir?"

It was the last topic that engendered the most questions and raised concern among some lawmakers who worry a city's right to protect its water supply from pollution could be used to unnecessarily restrict access.

The law, adopted in 1898 and modified in 1923, allows cities with 100,000 or more people to protect a water supply from pollution 15 miles upstream from the original point of diversion and 300 feet on either side of the stream or river.

Marie Owens, director of the Utah Division of Drinking Water, led a group that met this summer studying the issue to determine if modifications are necessary.

She stressed Wednesday that extraterritorial jurisdiction is not a land use planning tool, but rather a way for a city to ensure continued safe drinking water supplies into the future.

Rep. Mike Schultz, R-Hooper, said he believed those who crafted the law would never have envisioned it being used to limit human activity.

"I don't think they ever imagined we can't have people swimming in the rivers," said Schultz, noting the high recreational use of the Weber and Ogden rivers. "I think people in our area would come unglued."

Owens said the law gives cities the latitude to protect their water supply.

"They knew these mountains and watershed were unique and people would be attracted to them and they would be important to protect," she said.

Owens added that cities can be proactive to protect a water supply because it is much easier to prevent contamination than to deal with its aftermath.

"Once the water is contaminated it often has to be abandoned," she said.

But resident George Chapman said the law has consequences for access.

"The 15-mile rule is not common sense. We're banning dogs now. Next year we could be banning or limiting people," he said.

Chapman asserts the law was adopted after a cholera outbreak and at a time when sophisticated options for treating drinking water didn't exist.

"I'm urging you to take the reins and rein in this overzealous, nonsensical limit that doesn't make sense," he said.

Owens said recreational use of water is a "big concern," given problems like invasive quagga mussels, which can be transferred from waterway to waterway by boats.

Deer Creek had a scare in October 2014 after juvenile quagga were discovered in a water sample. The reservoir southwest of Heber City is a chief source of drinking water, and the quagga had the potential to gum up the piping and infrastructure.

In January, after continuous years of monitoring, the reservoir was declared quagga free. 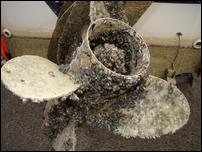 State officials on Thursday gave the "all clear" for Deer Creek Reservoir, which had been under anxious surveillance for three years for a potential infestation of quagga mussels.

Owens said regulators have also worked with the ski industry in the past on snow-making operations, ensuring that a certain harmful additive was not used at Utah resorts.

The summer's work on the complicated issue produced draft legislation Owens said restricts the exercise of extraterritorial jurisdiction to the county of the water's origin unless there are written agreements with the appropriate cities or counties.

Steve Clyde, a water attorney and member of the state's executive water task force, said his group spent 1,000 hours attempting to craft a solution to a constitutional provision on how cities manage their water. The current constitution prohibits the sale of any "waterworks" and disposal of water rights.

"We believe we solved 99 percent of the issues. We are quite confident we have no opposition in the water community," Clyde said.

The change, which would require a constitutional amendment, would allow a city to sell its "waterworks" or infrastructure, but only to another public or government entity.

"We are not doing things to let people get out in the market and play with these assets," Clyde said.

Other areas of potential water reform include requiring cities to clearly delineate their service boundaries and have those posted publicly, and potential use of the LeRay McAllister Fund to compensate private property owners in the watershed of the Wasatch canyons.

The final reports and recommendations on the water issues were given to the lawmakers for consideration in the upcoming session.