Wildfires cause devastating losses to livestock in Spanish Fork

SPANISH FORK — Cattle ranchers in Spanish Fork suffered devastating losses to their livestock after the Pole Creek Fire swept through Sweat Creek Canyon. The fire killed more than 40 cows and calves — most of the animals died due to smoke inhalation while some burned where they stood.

Rancher Eldon Neves said he’s moved his cows multiple times this summer to avoid fires. He thought they would be safe grazing in the narrows of the canyon just off of U.S. Highway 6. 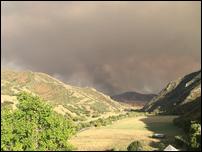 Crews gained some ground Saturday on two huge wildfires raging in Utah County, but are preparing for a red flag warning day Sunday with gusting winds.

For the past several days Neves searched the canyon for the remaining livestock. Thirty cows are still missing. Neves described the scene as endless gray with the terrible smell of burnt flesh.

The Pole Creek fire burned up and over the mountain from the Payson area. Neves said he feels fire crews had opportunities to put the fire out before it got this far.

“The value of what has been lost and what is still out there is probably around $250,000.”

Neves didn’t insure his cows. He said in 40 years, he’s never needed to. The cowboy says several other ranchers were also hit financially by the cattle losses. For him, the real loss is emotional. He said he has a strong connection to all of his cows.

“It’s just the idea that these little old critters died and I couldn’t help them,” he said with a glisten in his eye. “At the end of 12 years you kind of have a relationship with them.”

The rancher says he’s frustrated he cannot locate several dozen of the cows and calves, at this point he has no idea where they could have gone. And though those thoughts run through his head, he’s trying to focus on the animals that made it through the wildfire.

“We will have fewer numbers, but we will do the best that we can.”

*Disclaimer: KSL.com has not verified the accuracy of the information provided with respect to the account nor does KSL.com assure that the monies deposited will be applied for the benefit of the persons named as beneficiaries. If you are considering a deposit or donation you should consult your own advisors and otherwise proceed at your own risk.