THISTLE, Utah County — The Pole Creek Fire forced the closure of several roads and canyons in Utah County Thursday, and more residents in the area were ordered to evacuate, authorities said.

A mandatory evacuation order was issued for the communities of Woodland Hills and Elk Ridge, as well as the Covered Bridge Canyon community in Spanish Fork Canyon, officials said.

The fire had burned 20,000 acres, Forest Service officials said Thursday evening, and was moving to the north and northeast at that time.

Several major roadways in the area remained closed Thursday night, including parts of U.S. Highway 89 and U.S. Highway 6. Santaquin and Payson canyons were also closed, and the Nebo Loop Road was closed from state Route 132 in Nephi Canyon. 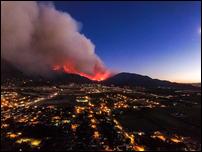 The Pole Creek Fire and Bald Mountain Fire in Utah County have burned over 68,000 acres combined, according to officials.

Watch here for live updates on this and other fires throughout the state:

Pole Creek Fire in Utah and Juab counties grows to about 20,000 acres

Lt. Gov. Spencer Cox has arrived on scene at the Pole Creek Fire

Rosecrest Fire southwest of Herriman expected to be contained by 6 p.m.